Taking a look at the Indiana Pacers' camp invitees

Signing Adonis Thomas, Arinze Onuaku, C.J. Fair, and Chris Singleton to non-guaranteed camp deals, the Pacers are not hesitating to evaluate talent and boost competition prior to the start of training camp.

Share All sharing options for: Taking a look at the Indiana Pacers' camp invitees

The Indiana Pacers already have the league maximum of 15 players on their roster for next season, but that has not stopped the team from reportedly showing interest in Zoran Dragic, inviting center Josh Crawford for a workout, and signing multiple players to non-guaranteed, training camp deals:

After guaranteeing Donald Sloan's contract by the August 15 deadline, the Pacers currently only have two players on their roster with partially guaranteed deals they could waive to create roster space (Luis Scola and Shayne Whittington). Indiana still has the league granted Disabled Player Exception at their disposal if need be. However, contrary to popular belief, the DPE cannot be utilized without an open roster spot.

Already carrying a full roster, the Pacers would have to either waive a player or complete a 2-for-1 trade in order to open a spot for one of their training camp invitees. While it is seemingly a long-shot for any of these players on non-guaranteed deals to stick with the Pacers beyond September, here is a brief profile of each:

Once considered a top high school prospect, a series of injuries combined with inconsistent play while at Memphis resulted in Thomas going undrafted in the 2013 NBA draft, per Draft Express. During his career as a Tiger, the 6'7 small forward averaged 10.7 points and 4.0 rebounds on 42.6% shooting in approximately 27.5 minutes per game.

After leaving college, the NBA hopeful was signed by the Brooklyn Nets mid-training camp and later assigned to the now defunct Springfield Armor of the NBA Developmental League:

Appearing in 34 games with the Armor, Thomas averaged 16.6 points on 45.9% shooting. As a junior at Memphis, Thomas shot just 29.2% from behind the arc. While playing in Springfield, his accuracy rate from long-distance skyrocketed to 46.6%: 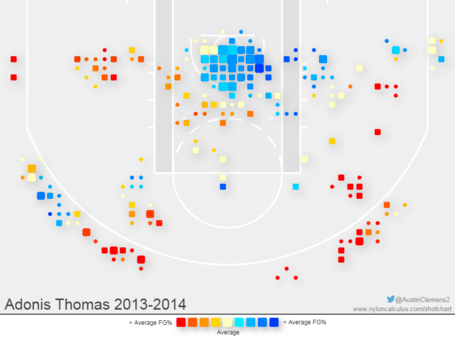 The above d-league shot chart created by Nylon Calculus compares Thomas' d-league field goal percentages from various areas on the court to that of NBA averages from those same areas. Red signifies those particular areas where he shoots above the NBA average, blue, of course, then indicates the opposite.

While there is a lot to like about Thomas' ability to stretch the floor as well as his 7'0 wingspan, this blurb from Draft Express underscores why the Pacers, in particular, would want to invite the former Tiger to their training camp:

On the defensive end, Thomas can be seen in more of a bright light overall, as his physical attributes shine through more frequently, as he's capable and often is a versatile and aggressive perimeter defender.

Per basketball-reference, Adonis allowed just 98.0 points per 100 possessions during his tenure at Memphis.

In addition to playing with the Armor last season, Thomas completed two 10-day contracts with the Orlando Magic and one with the Philadelphia 76ers, where he scored just 14 points in 37 total minutes of game action.

For the Pacers, ranking 17th in the NBA in terms of three-point shooting at 35.7%, adding another long-range shooter capable of defending multiple positions would be a plus after losing Lance Stephenson in free agency and Paul George to injury.

Onuaku, currently at 6'9 and 275 pounds, is a strong, yet undersized power forward with a center's skill set, per Draft Express. During his four seasons at Syracuse, he averaged 9.2 points and 6.0 rebounds on 64.8% shooting. An efficient offensive player (64.1% true shooting), he struggled mightily from the charity stripe while representing the Orange, shooting just 39.5% from the line over his entire college career. Suffering a quadriceps injury during his senior season, Onuaku's inability to work out for interested NBA teams ultimately resulted in him going undrafted in the 2010 NBA draft.

Attempting to fight his way back from injury and onto an NBA roster, the Maryland native and former Syracuse player has made stops with the Rio Grande Valley Vipers (2010) and Canton Charge (2012-2013, 2013-2014) of the NBA Developmental League as well as Klaipedos Neptunas of Lithuania (2011-2012):

During the 2013-14 season with the Canton Charge, Arinze appeared in 32 games recording 16 double-doubles and averaging 14.8 points and 10.1 rebounds in approximately 24 minutes per game. Shooting 62.8% from the field, most of his shot attempts came from near or directly around the hoop, per Nylon Calculus: 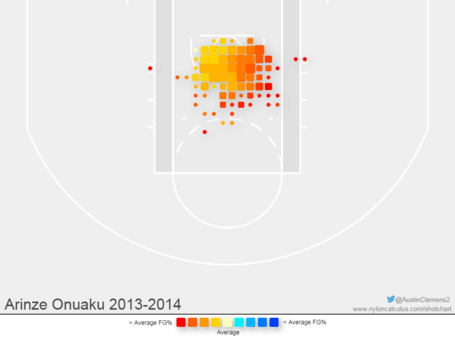 As the above graphic indicates, his offensive game is somewhat limited. Completing a pair of 10-day contracts with the Cleveland Cavaliers and New Orleans Pelicans last season, 80% of his field goal attempts came from within 0-3 feet of the basket. Of course, shooting just 55.9% from the free throw line in the d-league goes a long way to explaining why he refrains from attempting field goals outside the painted area.

A member of Indiana's roster, the Pacers got a closer look at Onuaku at the Orlando Summer League where he averaged 8 points and 7.5 rebounds on 68.4% shooting in a little over 18 minutes per game.

With an already complicated frontcourt, the Pacers really do not have room for yet another forward or center. Limited offensively and unable to stretch the floor, Onuaku's greatest asset is arguably his ability to corral rebounds. Grabbing 44.7 rebounds per game and ranking 8th best in the NBA, the Pacers already best more than two thirds of the league in that category.

Marked as an inconsistent shooter with an undersized build, C.J. Fair, ranked 24th amongst NCAA seniors by Draft Express, never heard his name called on draft night. Over his four-year college career at Syracuse, Fair averaged 11.6 points and 5.7 rebounds on 46.2% shooting:

At 6'8 and 215 pounds, Draft Express' profile raises some red flags about his ability to play power forward at the professional level:

Another thing contributing to his relative lack of efficiency inside the arc is that Fair doesn't get much offense in the post, despite playing most of his time at power forward. Fair has decent footwork, but his lack of lower body strength and inability to establish post position limits this aspect of his game. He does do a good job of finding seams in a defense and moving without the ball, something which should be useful when he makes the transition to the next level.

Defensively, Fair has many of the same question marks when trying to project to the next level that many Syracuse players face, particularly when trying to determine whether he could effectively guard small forwards on the perimeter. Standing under 6'8" without the wingspan to make up for it, Fair may struggle to see extended time at the power forward position.

Transitioning to a small forward, Fair will need to continue to refine his perimeter skills, per Draft Express (i.e. shot creating, ball handling, and making and taking three-pointers).

The former Syracuse player competed in the NBA's Las Vegas Summer League where his athleticism was on full display:

Representing the Dallas Mavericks in Vegas, Fair averaged 4 points on 50% shooting in a little over 13 minutes per game, knocking down just one of his only 5 three-point attempts.

As a small forward, the Pacers would have to really be impressed with Fair to sacrifice the internal development of players already on their payroll such as Solomon Hill and Damjan Rudez.

Drafted out of Florida State with the 18th pick in 2011 and spending three seasons with the Washington Wizards, Chris Singleton is the only training camp invitee with any real NBA experience.

During his rookie season, the 6'8 small forward started 51 games averaging 4.6 points, 3.5 rebounds, and 1.1 steals in approximately 21 minutes per game. Since then, Singleton's playing time has been vastly reduced - seeing just 16.2 minutes per contest his sophomore year and 10.0 minutes per game last season. 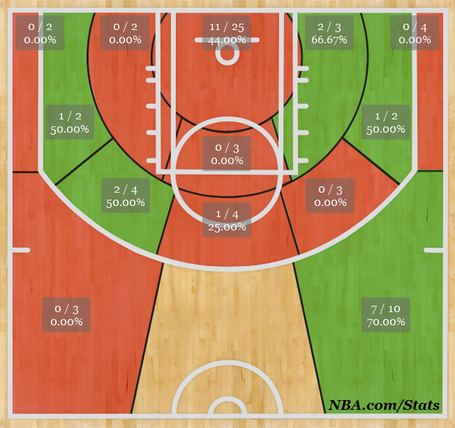 According to Synergy Sports, Singleton shot a woeful 29.6% from the field on 27 spot-up attempts and scored just 0.79 points per possession, ranking 394th in the NBA.

The now former Wizard appeared in only 25 games for Washington last season, averaging 10.8 points and 7.9 rebounds per 36 minutes with a true shooting percentage of 48.1%.

Ranking 24th of 30 in terms of points per game and connecting on just 44.9% of their shots from the field during the 2013-2014 season, the Pacers' offense already has very little for room for error without adding another inconsistent shooter. In the absence of Paul George and Lance Stephenson, Indiana could certainly use another wing player. However, there is already competition for those minutes from Solomon Hill as well as stretch-fours Chris Copeland and Damjan Rudez.

In a move that would cost the team nearly $2M (per 8 points, 9 seconds), the Pacers electing to actually cut ties with Luis Scola, an NBA-proven veteran, in favor of one of the aforementioned untested invitees seems almost unfathomable. Regardless of those random rumors about Real Madrid showing interest in acquiring him, Luis Scola has no immediate plans to part company with the Pacers.

The only other player on Indiana's roster with a partially guaranteed contract is newcomer Shayne Whittington. Freshly signed and battling his way back from injury after suffering a broken left fibula and torn ligament in his left foot, it is hard to imagine that the Pacers would already waive their new acquisition in order to create a roster space.

Already carrying a full 15-man roster, the camp invitees' dream to take up roots with an NBA team is unlikely to come to fruition with the Indiana Pacers. Boosting the level of competition at training camp, Adonis Thomas, Arinze Onuaku, C.J. Fair, and Chris Singleton will still have the opportunity to leave a lasting impression with decision makers. If down the road Indiana happens to make a 2-for-1 trade and any of the four players are unsigned at the time, then the effort and commitment they put forth in September might just earn one of them a roster spot.

Whatever happens in the future, the journey begins now.