In 1973 the Indiana Pacers took home their third ABA title in four seasons by defeating the Kentucky Colonels in game seven. Game six, which Kentucky won handily, is in full on YouTube.

Let’s take a trip back to the glory days of the ABA Indiana Pacers. 1973 was the last time the Pacers claimed a championship.

Once in the ABA Finals, the Pacers had a 3-2 series lead over the Kentucky Colonels with game six in Indiana. This game – in full – lives on YouTube.

Here’s a look back at game six of the 1973 ABA Finals. (Pacers in white, Colonels in black)

Mel Daniels was giving up five inches to the 7-foot-2 Gilmore, but it was the most entertaining matchup of game six.

Gilmore with a spin move at the free throw line to get an open look.

This is the only time Daniels fronted Gilmore in the post. And for good reason, as the help-side defense had no chance at stopping Gilmore at the rim.

Daniels was forced away from the basket by Gilmore throughout the game, but Daniels was good enough in the first half to hit tough shots.

Oh, Mel just decided to get out of the way.

I'm taller than you. Deal with it.

You don't help off of Mel Daniels.

Go get yours, Mel.

Maybe you can help off of Mel Daniels.

Ultimately, Mel Daniel seemed to wear down in the fourth quarter and couldn't keep hitting the tough jumpers as Kentucky pulled away.

The other star for the Pacers

George McGinnis was a lot of fun to watch in this game. He was a versatile big man that could run the floor and create his own shot at any point.

Contest the jumper then outrun everybody.

Very early in the game, Indiana went to this play.

McGinnis starts on the wing and gets a screen around the elbow as he cuts to the opposite block. Donnie Freeman eventually gets the ball on the near wing and drives at McGinnis, who sets a screen for him. As the Colonels double the ball, McGinnis slips to the goal. Freeman makes a good wrap around pass, and McGinnis’ shot is counted because the help-side defender was called for goaltending.

This is nice. A pick and roll leads to a slow double team on McGinnis in the post. He fires a skip pass to Darnell Hillman, who finds Daniels for the open 15-footer.

The Pacers main focus on offense was feeding Daniels and McGinnis in the post. This led to quite a bit of stagnation on the perimeter.

Daniels buries the jumper, but this offense was not sustainable for the length of the game

A simple down screen on the far side ultimately gets the ball to the short corner. Daniels lets Gilmore cut across the lane without slowing him down, and allowing Gilmore to get great positioning.

The Pacers switched a ball screen for one of the few times in this game, but Lewis elects to leave Gilmore to double team on the perimeter. Gilmore finishes off the open lob. 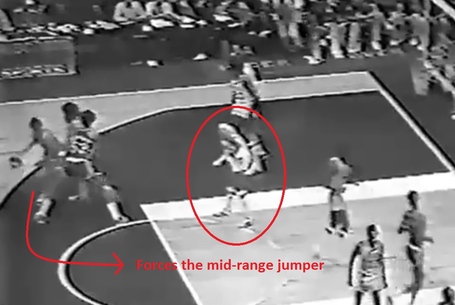 The Pacers were sagging their big man on the pick and roll long before Roy Hibbert and Frank Vogel showed up.

That's the favorite pick and roll defense of the Chicago Bulls, ice. Force the ball handler away from the screen and trap him when he drives that way. But Indiana didn't have a defender rotating to take away the pass to the big man.

Joey Crawford in the ABA?

That's two flops on one play. But all these new players don't respect the game by flopping! They are ruining basketball.

The play-by-play announcer wasn't quite up to date with the term flopping as his call was, "There’s a lot of acting going on out on the floor."

And, "Oh my goodness. This little six footer just sent me on the seat of my pants."

Finally, Jimmy O'Brien would have been Nick Young's favorite player.

The Pacers lost this one at the start of the 4th quarter. Kentucky had a lead of six to 10 points through the first three quarters. Indiana trailed 80-74 at the end of third quarter, but Kentucky ripped off an 8-0 run on 4 of 4 shooting to start the fourth and never looked back.

But game seven back in Kentucky went to Indiana, as Slick Leonard and the Pacers were champs again.