Luis Scola dropped 30 points on 19 shots against Croatia, showing that he can still do more than catch and shoot out of the pick and pop.

In his first year with the Indiana Pacers, Luis Scola’s offensive game was elbow jumper after elbow jumper. In the regular season 58 percent of Scola’s shots were two-point jumpers outside the paint, by far the highest percentage of his career.

It was the first season that more than half of Scola’s field goal attempts came from outside the paint. He did make 44 percent of his shots from this distance, good for .88 points per shot.

But in Scola’s 30-point performance, he showed the ability to score at the rim. (Or well under it.)

Scola benefits from Marcos Mata’s drive. The defense collapsed to take away Mata’s layup, but Scola was able to get to the basket and score.

For Indiana, Rodney Stuckey might be able to play a slasher role, or occasionally aggressive George Hill could create these opportunities.

Scola also showed he could slip a pick and roll, and get an easy layup.

This slip for a layup was made possible by the Argentina spacing. Scola is the five on this play. With shooters spacing the floor, Croatia is slow to help on the cutting Scola.

Scola also put up 19 points on 12 shots against the Philippines on Monday.

The Philippine defense is scrambling the entire possession because Scola initially beat his man off the dribble. After two teammates shot fake to take defenders out of the play, Scola gets the ball back and scores despite poor spacing.

The other area that Scola helps his national team’s offense is drawing double teams. 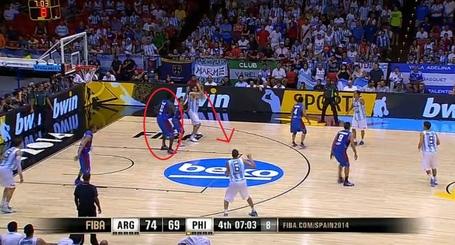 Facing a zone defense, Scola has a mismatch on the far side, so a help defender has crept over. This leads to an open and made three by Mata. Again Scola is the five, and the Philippines are staying close to shooters despite being in a zone.

Indiana could replicate this to a degree, but the Pacers would need to have some combination of C.J. Miles, Chris Copeland, C.J. Watson and Damjan Rudez on the floor. And unless we see a new identity from Frank Vogel, Scola will always have another big man on the court with him.

The other factor is that Scola is not facing a Tom Thibodeau defense. Would Scola still be able to score as efficiently against NBA-level defenses?

But as Scola continues to be an Argentine basketball legend, Vogel should be re-considering how he can get bench points with Scola.

One other concern from watching Scola in the FIBA World Cup is his defense. The Philippines hung around with Argentina by forcing Scola to defend ball screens on the majority of fourth quarter possessions. And he wasn’t very impressive defending the ball screens.

Scola sags on the pick and roll even though Jim Alpag was on fire from three – 5 of 7 for the game.

And here Scola gets embarrassed off the dribble by Ranidel de Campo. (de Campo and Alpag are teammates on the alliteratively named Talk ‘n Text Tropang Texters in the Philippine Basketball Association.)

Scola’s defense will be a concern for Indiana, but with Paul George and Lance Stephenson’s absences, Vogel and Indiana will need offense from somewhere. And utilizing Scola like Argentina does could lead to more points.