With the Paul George injury leaving the Pacers thinner on the perimeter, Indiana has interest in MarShon Brooks and Gary Forbes.

According to Real GM, the Pacers are considering MarShon Brooks as a free agent. Brooks would be added in an attempt to fill the void left after Paul George’s injury.

Brooks is 25 years old and stands at 6-foot-5 and 200 pounds. He’s played in three NBA seasons with his rookie year as a Net being his best. That season Brooks averaged 12.6 points per game while starting 47 games. He shot 43 percent from the field and had 2.3 assists per game. 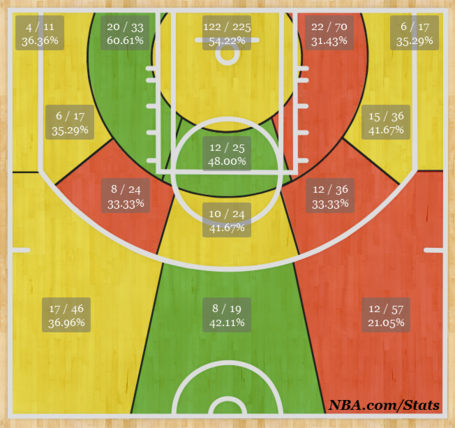 Following a 2012-13 season where his minutes were cut in half in Brooklyn, Brooks bounced around the NBA last season. He played in 35 games for three different teams, the Boston Celtics, the Golden State and the Los Angeles Lakers. For his career he’s shot 44 percent from the field and 33 percent from three.

Brooks originally signed a four year deal worth over five million dollars after being drafted in the first round. Brooks was a part of the Sacramento Summer League team that won the championship in Las Vegas. He came off the bench scoring 10.6 points per game.

The Pacers also have interest in Gary Forbes, a 29-year-old forward who is 6-foot-9.

Last year Forbes played 11 games for the Springfield Armor. He scored 17.7 points per game and knocked down 35 percent of his threes. Two years ago he played 27 games in China, averaging 28.3 points per game.

The Pacers won’t find anything close to replacing Paul George, but with a thin small forward position, Indiana may need to bring in another wing player. Indiana could have gotten away without a lot of depth at small forward, as George would have likely played the most minutes on the team.

But now Indiana is looking at either playing a smaller lineup with some trio out of C.J. Miles, Rodney Stuckey, C.J. Watson and George Hill starting. Or playing bigger with Chris Copeland or Damjan Rudez playing on the perimeter. Or playing younger with Solomon Hill at the three.