The Pacers may have taken a hit by losing the player known as Born Ready, but, in David West, they have someone who is seemingly Born Steady.

For David West, calling him the backbone of the Indiana Pacers has gotten to a point where it almost seems cliche. During a year that could aptly be described as a tale of two vastly different seasons, the Blue-and-Gold's 11-year NBA veteran provided steadfast stability as well as pacifying predictability. On a team chock full of talented 20-somethings, it was 33-year old David West contributing the second most win shares (8.1), scoring the second most points (1118), and taking the second most total field goal attempts (939).

Having walked away victorious in just 16 of 30 games post All-Star break, West's individual productivity did not experience any noticeable drop-off during his team's second half swoon. In fact, the former All-Star's true shooting percentage remained at or above 50% throughout the entirety of the Pacers' rocky February (60.1%), March (50%), and April (65.6%). Of course, none of these findings likely come as much of a surprise. When evaluating Mr. West, it could easily be said that his reliability is his greatest asset. Whether during his team's 54 wins (14.4 PTS, 7.0 TRB, 2.9 AST) or 26 losses (13.2 PTS, 6.3 TRB, 2.5 ASt), No. 21's game provides very few, if any, real question marks.

Perhaps nowhere was West's role as the team's stabilizer more evident than during the 2014 postseason. With his top-seeded Pacers on the brink of elimination in Atlanta, West - with his team clinging to his back - poured in 24 points, grabbed 11 rebounds, and dished out 6 assists to bring the series back to Indianapolis for a decisive Game 7. It is precisely these type of performances which make Larry Bird's description of David West when discussing how he built the current version of the Indiana Pacers with USA Today Sports all the more clear, "One guy changed everything."

How did David West impress?

While West is likely most well-known for his signature scowl and punishing physicality in the post, his sweet jump shot is arguably the most awe inspiring aspect of his overall game: 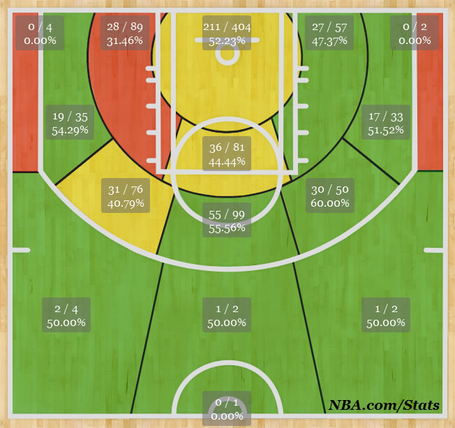 As can be observed by his above shot chart, West was one of the league's most efficient midrange shooters during the 2013-2014 regular season. Remarkably, according to basketball reference, West shoots the highest distribution of his field goal attempts (31%) from in-between 16 feet and the three point line, otherwise known as long twos. Typically deemed the league's most inefficient shot, West knocks down 52.1% of his shot attempts from that range. If that is not impressive enough, please note that none of the rest of the team's starters even managed to knock down 40% of their attempts from that distance. Which, in turn, means that West serves as an absolutely crucial space creator for the Pacers' oftentimes languishing offense.

Playing alongside two legitimate Defensive Player of the Year candidates, West's capabilities as both an intelligent and elite defender are often overshadowed. On the year, he collected 5.0 defensive win shares, good for 5th best in the league. Per Synergy Sports, West did exceptionally well when defending isolation plays, allowing a conversion rate of just 25.3%. During the playoffs, West shined protecting the paint as he allowed just 43.2% of shot attempts taken at the rim.

How did David West disappoint:

Other than a below average stretch during mid-January, when the power forward scored in single digits for five out of six games (which not so surprisingly coincided with the appearance of a make-shift glove on his shooting hand), it is difficult to really nitpick at West's game.

If there is to be any real disappointment, it might be that only 20.1% of his shot attempts came at the rim this season. As lethal as West is from midrange, it is nonetheless notable that the average distance of his field goal attempts (10.6 feet) is the highest of his 11-year career. Given that West is a more than capable option in the post (converting 49.2% of his post-ups), his low shot distribution from the paint might lend some credence to the notion that the Pacers changed their modus operandi, perhaps for the worst. Playing inside-out upon his arrival, the Blue-and-Gold moved away from that formula during the second half of the season and instead became content with what in basic terms could be described as over-dribbling and under-passing.

What's next for David West:

As noted above, West is 33-years old. While he has yet to show any real signs of the aging process, it is entirely possible, if not probable, that he will not have many more opportunities to win a championship. While it is irresponsible to speculate too much about his and the team's future so soon, it should, at the very least be noted that West has an upcoming player option for the 2015-2016 season. Which may, in turn, mean that the Pacers upcoming season is as crucial to retaining West as West himself was for the Pacers' rebuild three short seasons ago.

Possessing an old man's game wrapped in toughness with a high basketball IQ to match, to call him the team's backbone during the 2013-2014 season is not just an overused description it might just be an understatement.

Like Larry Bird told USA Today, "He's a real man. He brings it every day. He expects his players to do the right thing. He expects them to come together, work hard, play hard and get along."

What grade would you assess David West for the 2013-2014 season? In what ways did he impress and/or disappoint? Do you view the upcoming season as key to retaining his services?