How C.J. Miles fits into the Pacer offense

Barring a major trade the Pacers will likely be looking at C.J. Miles to fill some of the void left by Lance Stephenson’s departure to Charlotte. Parts of Miles’ game will fit right into what Indiana already runs on offense.

Share All sharing options for: How C.J. Miles fits into the Pacer offense

Pin down screens are Frank Vogel’s favorite way to get a shooter open. Paul George gets open for threes coming off pin down screens. Vogel has even utilized the pin down to get Roy Hibbert in good position in the post.

In Cleveland, C.J. Miles ran off of pin down screens all the time. Miles is a career 35 percent shooter from three, but in his two years in Cleveland Miles shot 38.8 percent while attempting 4.6 threes per game.

Here is a pick the picker play Indiana runs for George to get open for three.

Miles was involved in some pick the picker action in Cleveland as well. But here’s Miles coming off a pin down and finishing at the rim.

One possible issue for Miles coming off pin down screens is that it is the one situation where he will consistently shoot long twos.

It was seemingly the design in the Cleveland though. Miles curl off the screen was usually to that 16-foot area for a quick jumper.  But as you can see from his shot chart, Miles doesn’t live in the long two area very often. 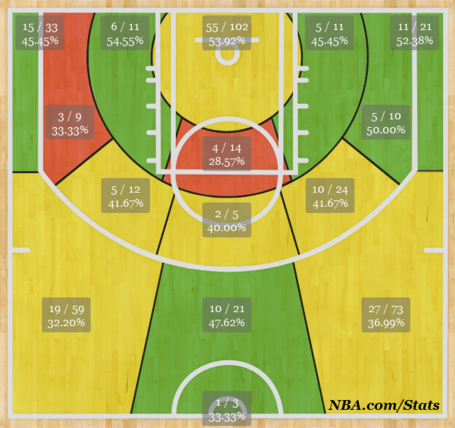 Eliminating long twos from the offense will help Indiana fix the offensive efficiency problems that have plagued the team under Frank Vogel. Only 15.2 percent of Miles field goal attempts in 2013-14 came from the 16 feet to three-point line range. Of all Indiana players in the regular rotation, only Lance Stephenson and George Hill shot a fewer percentage of their shots from 16 feet to inside the three point line, per nbawowy.com.

Paul George shoots too many long twos, as 21.2 percent of his field goals were in the long two region. He knocked down 37.6 percent of those shots, which equates to .75 points per shot. Last season, George scored 1.09 points per shot on his 500 three-point attempts.

C.J. Watson, who could see an increased role too, attempted a higher percentage of long twos, as 21.7 percent of his shots were long twos. He shot better than George, but still those shots equated to .87 points per shot. Whereas a Watson three was worth 1.09 points.

The long two can’t be completely eliminated, as defenses are trying to force inefficient shots. But Indiana would greatly benefit from a conscious effort to shoot more threes and less mid-range jumpers. C.J. Miles will be part of a solution to that problem.

By the way, David West is the huge exception to the no long twos rule. He shot 52.1 percent on them last season. So a mid-range two from West was worth 1.04 points, nearly the same as Watson and George threes.

Miles won’t be asked to handle the ball nearly as much as Stephenson did. He won’t be leading the Indiana bench on two minutes of nonstop transition like Stephenson did. But losing that aggressive creativity will cause the turnovers to drop for Indiana.