The Paul George – Trevor Ariza matchup has gotten feisty, as George has diminished Ariza’s defensive ability despite George’s struggles in the series. Ariza has done a splendid job on George through two games, but his defense lost Washington game two.

Paul George is shooting 30 percent against the Wizards. His gotten to the free throw line and converted – he’s 10 of 11 in the series – but Trevor Ariza has been instrumental in knocking George out of rhythm. 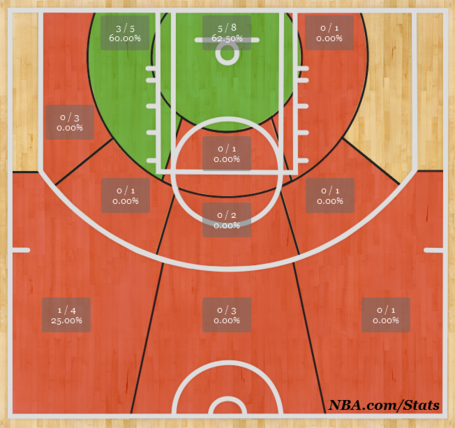 Despite the poor shooting, George doesn’t think it is Ariza’s defense.

"He's just a deny guy," George said. "He's good at just playing that deny the ball to him, pressure on every catch. He's a good defender, but he's not someone that will take me out of my game."

That has prompted the necessary responses from Bullets Forever and The Washington Post.

But if you take a look at how the Pacers closed out game two, Ariza’s defense on George is a huge factor in the Wizards loss.

With 3:45 left in the game the Pacers held a one-point lead, and Paul George got into the lane for a dunk.

As George drives, Ariza doesn’t cut off the basket. Maybe he is trying to sell a push-off foul on George, but regardless it is an easy finish at the rim for George. (Also notice that Nene is hesitant to help off of Roy Hibbert.)

The Wizards matched that bucket, but the George managed to beat Ariza again to put Indiana back up by three.

Maybe Ariza was expecting Marcin Gortat to still be there to help, but Gortat falls back onto Hibbert. (His big game really helped, huh?) Ariza gives up the baseline and ends up behind George as he finishes off a layup.

Then with the clock running down, Lance Stephenson hit the dagger from just inside the three-point line. But it was Ariza’s over aggressiveness that led to Stephenson’s jumper.

That’s Ariza flying past George after a pump fake in the corner. George puts the ball on the floor, and now Washington has to rotate.

Beal has to leave Stephenson because Ariza is out of position. Stephenson continues heading backward; George finds him for the jumper that ended Washington’s bid at a 2-0 series lead.

Ariza has been tremendous on George, but he isn’t perfect. And his defense down the stretch was near awful and cost Washington the game.