Where the Pacers failed guarding the Wizards on the perimeter

The Pacers gave up 60 points to the Wizards’ starting wings. Trevor Ariza had a perfect night shooting from three, John Wall showed incredible vision in transition and Bradley Beal led the team with 25 points. So how did the Pacers struggle defending the perimeter?

Share All sharing options for: Where the Pacers failed guarding the Wizards on the perimeter

The Wizards’ offense starts with John Wall and his ability to either create for himself or his teammates, but let’s start with the guy who drained two threes to open the game.

Trevor Ariza nailed all six of his three pointers, which accounted for 18 of his 22 points. Every one of his threes were wide open because of two reasons; either Paul George was unnecessarily helping off of Ariza, or the Pacers failed to communicate in transition.

First, the Wizards opening possession, which was extended by an Ariza offensive rebound.

Even though David West is in position to defend Nene, George thinks he needs to put a hand up. Well, Ariza is sneaking to the corner, and when Nene hits him with a pass, George has no chance to close out.

Then it happened again, except this was off of a John Wall and Nene pick and roll. Ian Mahinmi has gotten back to defend the roll man, and Luis Scola is even ready to help from the baseline.

But for some reason George thinks he needs to help too, and Ariza gets another open three.

Now in the second half, Bradley Beal is cutting up through the lane, while Wall has the ball on the near wing.

George has run up next to Beal. Lance Stephenson is trailing Beal, but he is not out of position. While George is over helping, Ariza slips to the far wing, and Wall finds him for an open three.

Now in transition, the Pacers were back, but just failed to pick up Ariza.

Wall has just dumped the ball behind himself to Ariza. George Hill and George are both there, but neither is able to contest Ariza’s three.

There are four Wizards on the break, and the Pacers have four defenders back. But Hill, George and Evan Turner fail to communicate at all, and they all end up in the same place – no man’s land.

Here the Pacers have all five guys back. The Wizards are short handed with just four guys up the court, but still the Pacers fail to communicate and Ariza gets another wide-open three.

That is all of his threes. It is really simple for Indiana, don’t have George cheating off of Ariza, and actually talk to each other in transition defense.

For John Wall, he did a tremendous job of finding Ariza in transition and in the half court. Wall finished with nine assists, most of which came in transition or from Wall getting in the lane.

The Pacers actually do a pretty good job on Wall coming off ball screens. Typically they force him into a mid-range jumper, just as the Indiana defense was designed.

They did this with Beal as well.

Wall finished 4 of 14 from the field, and Beal was 8 of 18. The biggest issues Indiana had with the two guards was sending them to the free throw line, as Wall had six attempts and Beal nine.

With Beal, the Pacers didn’t do very much wrong when defending him, he managed to hit shots like this.

But there's an interesting note with Beal. The Wizards like to run him off screens that allow Beal to come from the block to the wing for an open shot. Typically this is for a three pointer – the Pacers run similar action for George. But for some reason Beal takes long twos.

The longest of twos. And given his shot chart for the night, he should have been coming off those screens a step deeper. 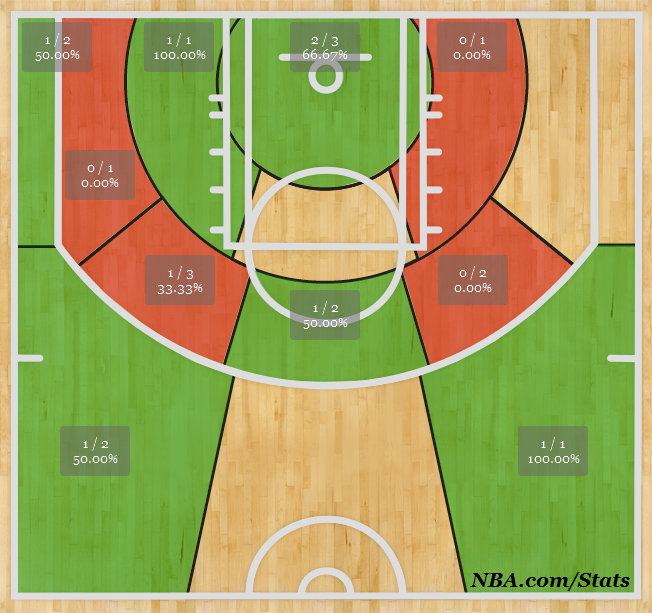 It all starts with Wall. If the Pacers can keep him out of the lane, then the half court defense will be fine, as long as George stops over helping. Otherwise the Pacers gave Wall opportunities to create with live-ball turnovers.

Also, it would help to grab some defensive rebounds. (Some of those were created by post players being concerned with a driving Wall or Beal, but not the majority.)