The return of the five

Facing elimination in a game seven against the eight seed, Frank Vogel played just three players off the bench, who combined for just 38 minutes. Vogel rode his starters because they were back to being one of the top five-man units in the NBA. The identity returned.

Share All sharing options for: The return of the five

George Hill, Paul George and David West all logged 43 minutes; Lance Stephenson got 39 and Roy Hibbert played 31. The five scored 81 of the Pacers 92 points and grabbed 50 of the 55 rebounds. And all five starters had a +/- of at least +10, while the three bench players were either at 0 or negative. Just like old times.

And just like the early part of the season, Paul George thrived in the midrange and ended up with 30 points on 11 of 23 shooting. It was the return of MVP-candidate Paul George, as he was knocking down tough two pointers.

He even decided to pull up in transition because it was his night. 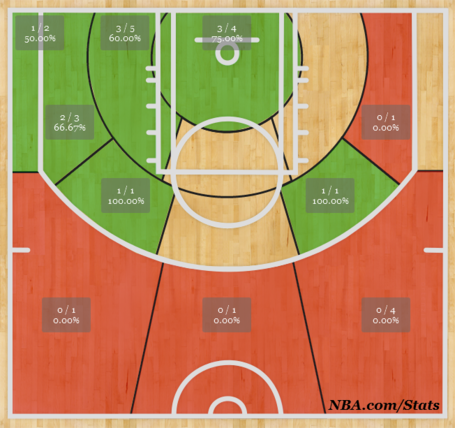 A new way the Pacers got George open looks was with a high ball screen. The big man would set one way beyond the three-point line, and this created more space for George to work when he comes off the screen.

He also gets to build up more speed as he attacks the basket. But it is the added space that makes this high ball screen effective.

George has split the two defenders and now has room in front of him. And as all five defenders focus in on him, George will have options to find an open man if the help defense is too aggressive.

However, Roy Hibbert’s return to normalcy was the biggest factor in solving the identity crisis. The big man had 13 points on 6 of 10 shooting, and his shot chart couldn’t be confused with a murder scene. 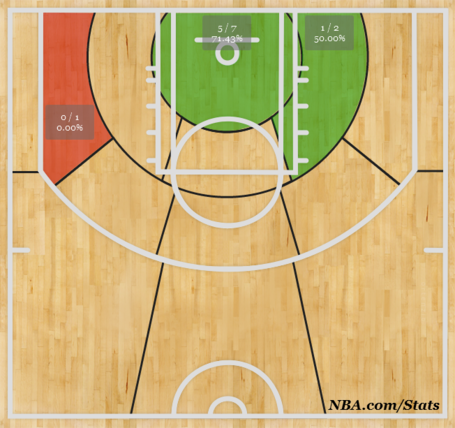 Hibbert did an excellent job of getting quality position in the post. He worked before the ball came to him. This got him into a spot where he was a viable threat to score, but also opened up the passing lanes, which allowed for better entry passes.

His feet are just outside the restricted area, and trying to establish Hibbert in the first quarter finally paid off for Indiana.

He also grabbed seven rebounds and blocked five shots. Throw in six more blocks from David West, and the starters had 11 of the 13 Pacer blocks.

West struggled shooting, as he had just four points on 1 of 7 shooting, but he contributed with his six blocks, four assists and 13 rebounds. The way West closed out game six influenced the Hawks defense. Early in the game the Pacers went to the high ball screen with Hill and West.

The Hawks remained with their strategy to double Hill, but in order to not let West burn the them, DeMarre Carroll is creeping up to help. But Atlanta's problem is that West is a playmaker from this spot - for himself and for the open man.

George slips down the baseline, and West finds him for the easy slam. Basically, the Pacers have a strength and exploited a defense when it over committed to stopping it.

Lance Stephenson went and got himself a playoff double-double with 19 points and 14 rebounds, as well as five assists. Even George Hill had a big night as he got to the free throw line and went 9 of 9. Hill finished with 15 points, five rebounds and four assists.

The Pacers’ starters stuffed the box score. With the ever-changing rotation in this seven game series, the starters never asserted themselves as a unit and never filled out the statsheet this well.

But in game seven, the Pacers got back to what makes them title contenders – play big, protect the rim and let Paul George flourish.

But will this unit show up for the entire series with Washington? Or will all of the questions start popping back up?