The number one defense in the NBA throughout the regular season hasn’t been as suffocating in the playoffs. But in game three Indiana dominated Washington by forcing long two pointers, and it all started with the Pacers pick-and-roll defense.

Share All sharing options for: Pacers dominate the Wizards pick and roll

Frank Vogel’s defensive scheme on the pick and roll has been a major reason for the success on the defensive end of the court. Go over the screen, sag the big man and force a mid-range jumper.

"This is our style of basketball," Paul George said after the game. "What we do is play defense. We’ve gotten to this point because of defense, and that’s what we did tonight."

Some quick point guards like Goran Dragic and Atlanta’s five shooter offense gave the scheme trouble, but against most teams it works.

Throughout the regular season and first two games of round two the Pacers forced John Wall into shooting jumpers as he came off the ball screen. But when he was able to get into the lane he often found an open man. But in game three there was no room for Wall or Bradley Beal to find a lane.

Per My Synergy, on 18 pick and rolls for the ball handler, Washington scored nine points. The Wizards offensive inefficiency is all because they shot long twos.

Beal and Wall were forced into these shots all night.

Via these ball screens, Wall got into the lane twice – he was blocked by Hibbert and drew foul. Otherwise, he was shooting from around the free throw line.

Beal hit one three late in the game off of a ball screen, but other than that he was kept out of the lane as well.

But this is what the Pacers have been doing all series. Where Washington has had success is on the roll man. Wall and his big man, especially Marcin Gortat, have tremendous timing for the roll and pass. It normally gets Gortat the ball when the Pacers big man is out of position worrying about the ball handler.

On the first pick and roll of the game the Wizards showed this off. But Roy Hibbert rotated over and cleaned up the rim.

Other than that, the Pacers forced the roll men into long twos as well.

Overall, on the 32 pick and rolls that Synergy recorded, the Wizards scored 13 points, or .41 points per possession. Washington shot 4 of 22 from the field.

The interesting part about Nene is that his 15-foot jumper has been money all postseason. But he barely shot that in the regular season. 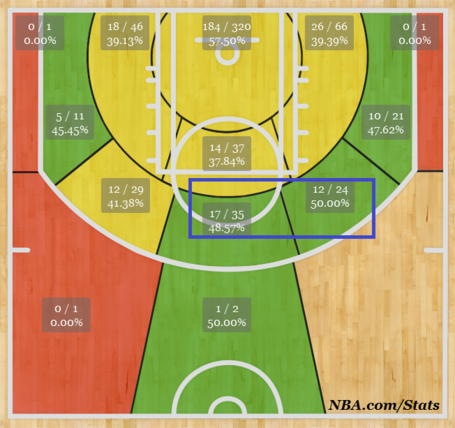 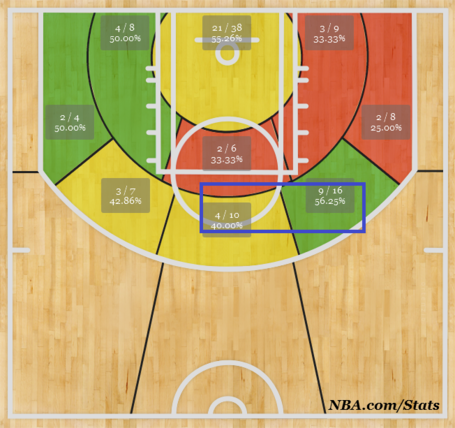 From the area above the right elbow and the top of the key, Nene shot 59 times all season. But through just seven playoff games, he has shot 26 times from that spot.

In the regular season Nene shot this 1.1 times per game; in the playoffs he is up to 3.7. That’s triple the attempts. The reason is Chicago and Indiana play the pick and roll similarly, by allowing the jumper. 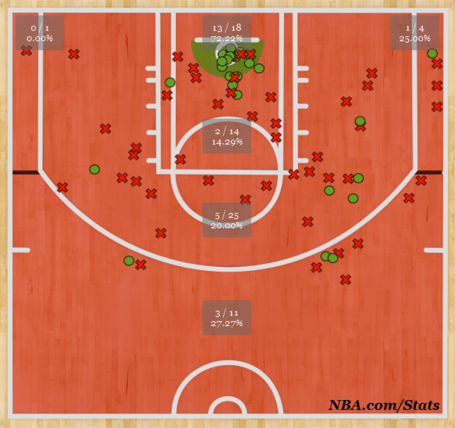 As a whole the best summation of game three is this.