The Pacers begin their weekend in Texas on Friday night when they visit the Houston Rockets at the Toyota Center.

The Pacers look to smooth out the bumps on the road in Houston after a rocky start to their three-game trip in Charlotte. The Rockets are rolling and present plenty of problems for the Pacers.

The Pacers need to make things easier for themselves on the offensive end and some transition buckets would be a nice way to soften up the Rockets. In the half court, the attention to details with better spacing, ball and player movement -- all of the stuff that seems obvious, are efficient ways the Pacers can take the fight to the Rockets and make them work on the defensive end.

As for the Pacers on defense, Dwight Howard had to enjoy looking at the tape of Al Jefferson destroying Roy Hibbert on Wednesday night. The matchup in the middle could be the difference and how the game is called will go a long way to determining what type of impact Hibbert has on the game. Keeping Howard from getting to the rim at will without landing in foul trouble is the task ahead for Hibbert. Any form of jumper from Howard appears to be a win this season, but as you can see, keeping him away from the rim is no easy task. 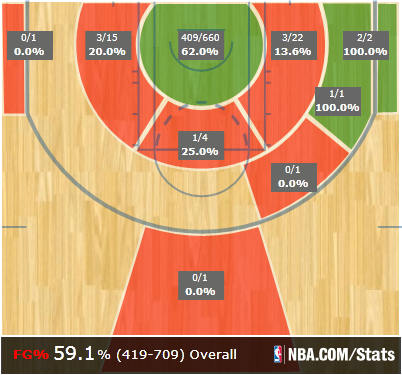 For more on the Rockets, check out The Dream Shake. Also, leave your thoughts and observations on the game in the comments.