Roy Hibbert: Where you been, Dawg?

In the Pacers' two most recent games, Roy Hibbert has attempted a grand total of 10 field goals. What are some statistical causes for his disappearing act and lack of touches? Is their a remedy for what ails the Pacers and their All-Star?

Share All sharing options for: Roy Hibbert: Where you been, Dawg?

Diagnosis - It began with a simple, yet revealing tweet:

It'll b interesting if Hibbert consistently gets more touches once season commences. Vogel made clear 2 George & Lance things must change

If you notice, February 16th was the date that NBA Analyst Peter Vescey put that tweet out for the world to see, and, to be honest, at the time of its publication it seemed like little more than a blip on the NBA radar. After all, it was the All-Star break, Frank Vogel was head coach of the East squad, Roy Hibbert and Paul George were both selected to represent the Blue and Gold in New Orleans, and the rest of the Pacers were free to sit back, relax, and enjoy their view from the top of the league's leader board. From any outsider's perspective, it looked like all was well in Naptown - nothing to see here, right?

Yes, it was easy to overlook the fact that, in the four games prior to the league's annual moratorium, Roy Hibbert was only attempting 7.5 field goals per game. As a point of reference, during the 2012-2013 playoffs (arguably, the high point of his professional basketball career, thus far) he averaged 12.4 shot attempts per game.

But, oh well. At the time, it was conceivable to believe that the drop-off in touches might have just been the product of physical and mental fatigue. It was February - the dog days of the NBA season. It seemed like the Pacers' problems were of the first-world variety, and as long as the team was winning, why should that tweet, or the implications behind it, really matter? Certainly, the motivation behind Frank Vogel's instruction to his backcourt would not have a lasting impact on the team's play.

Well, given the recent state of the Blue and Gold, the message behind that tweet was far from innocuous. It does not exactly take a great basketball mind to infer that Hibbert is less than pleased with his team's lack of ball movement. After seemingly standing by and watching his team average just 74 points over the past two games, Roy Hibbert was quoted as stating, "We've just got to learn...to play for each other like how we used to and set people up for easy shots...It's just a lot of 1-on-1 basketball."

One-on-one, indeed. In the past two contests, Roy Hibbert has attempted a pitiful  total of 10 shots. This type of shot distribution is not a recipe for winning basketball, at least not for a team that prides itself on being a balanced attack. Be that as it may, diagnosing, or pointing out a problem is easy, what proves more challenging is unearthing the cause and proscribing a remedy.

Cause: Lack of Trust - The first and most obvious reason for Hibbert's lack of touches just might be that his teammates do not have a whole lot of faith in his ability to actually convert around the rim with any consistency. If this is accurate, it certainly would not be baseless. For evidence to support this theory, one need look no further than this shot chart provided by NBA.com/stats: 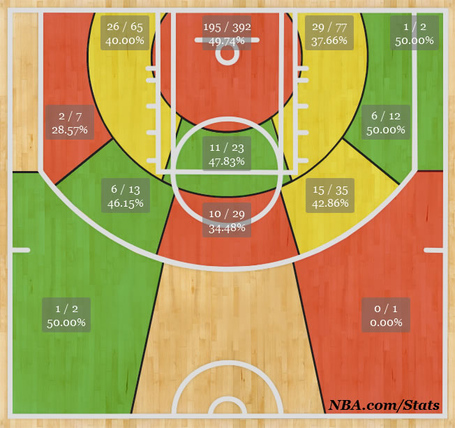 As can be observed from the red shaded hot spot zone in the paint, the All-Star's field goal percentage in the painted area is well below the league's average. Per ESPN's stats and information, Roy Hibbert's field goal percentage of 45.9% places him at just 19th in the league amongst his fellow centers. To his credit, the double nickel's most successful shot this season has been the hook shot which he is shooting at a mark of 57.4%. The numbers are significantly worse for his tip shot 34.1% and jump shot 32.7%. With these stats in mind, is it any wonder that, at times, his teammates might choose to rely on their own efforts rather than his?

Cause: Failure to Establish Low Post Position - Over the past several games, it has become increasingly difficult to ignore the fact that the Big Dawg just keeps drifting further and further away from the rim. According to basketball-reference, the average distance of Roy Hibbert's shot attempts this season is 8 feet (Note: this is the highest average distance of his career). Whether due to offensive breakdowns, defensive adjustments, or fatigue, Hibbert seems to have become somewhat content with relying more on his jump shot this season. In fact, when looking over his field goal distribution, 43.9% of his shot attempts are coming from between 3-10 ft. of the basket despite only shooting 43.3% from that distance. Even more curious is the fact that the Pacers' center is attempting only 24.9% of his shots from 0-3 ft. of the basket - a distance he is accurate from 56.1% of the time.

From these statistics alone, it is fairly clear that the Pacers offense - entirely tailored to their interior strength and physicality - is, at least percentage wise, better off when the Big Dawg establishes low post position early and often. Granted, Roy is dependent upon the backcourt's willingness to feed him the basketball; but, from the limited sample size of games Andrew Bynum played for the Blue and Gold, it was proven that his perimeter teammates are more than capable of delivering a big man the ball when he is on the block calling for it (Note: Bynum attempted 22 shots in two games with the Pacers, Roy has 10FGA in the past two games).

In Hibbert's defense, as explained here at Indy Cornrows, he did make his presence felt in the paint against the New York Knicks last Wednesday. In that particular match-up, he went 8-of-10 from the field and scored 14 of his points in the third quarter.

What was the notable difference in that contest?

After the game Hibbert told the Indy Star, "I felt that we were lacking and the way we were playing wasn't working in terms of outside shots. So I decided to take it upon myself." For Roy, establishing low post position needs to be more of a conscious effort and something he takes upon himself instead of, at times, standing behind his defender on the low block or being content with just taking jump shots.

Cause: Offensive Rebounding - One of the ways the All-Star center used to generate additional offense for himself more easily was with his ability to clean the offensive glass. Last season, Roy Hibbert ranked second in the league in offensive rebounding percentage; corralling 14.8% of Indiana's missed shots. Thus far, in the 2013-2014 season, the DPOY candidate is grabbing just 2.6 offensive rebounds per game.

The Pacers' atrophied rebounding rate was actually one of Zach Lowe's talking points in a recent post over at Grantland in which he notes, "The Pacers are just 19th in offensive rebounding rate after finishing 4th last season." Some have suggested that Hibbert's total rebounding numbers have dipped due to Lance Stephenson's alleged stat hunting. While that may be the case on the defensive glass where he snatches a career high 7.3rpg while Hibbert is blocking out, he only averages 1.3 offensive rebounds per game (thus poking a few holes in that theory). Unfortunately, Indiana's lack of offensive rebounds and second chance points is not only a problem for Roy's touches, it is also a major issue for a team that ranks just 22nd in the league in points per game.

Prescribing a Remedy - Its obvious that what the Pacers are currently doing offensively is not exactly working (to put it lightly); therefore, their possible lack of trust in the Big Dawg is of little to no consequence. The telegraphed passes from the wing to Roy Hibbert (8 feet away from the basket) which, typically, result in a turnover, are just not cutting it. With that in mind, Roy Hibbert is absolutely correct when he says, "We've just got to learn... to play for each other..." Whatever the case, the Pacers are going to need a lot more "togetherness" and a lot less stagnant offense when the Miami Heat roll into town on Wednesday if they want to cling onto the top seed in the East. Like Frank Vogel reportedly told his starters over All-Star weekend with regard to the absolute need to increase Roy's touches, "things must change."