The Pacers haven’t scored 80 points in two straight games. The offensive rating against Memphis and Chicago is 84.4. They’ve only eclipsed 90 points once in the last four games. It’s at a point where I’d rather spend my evening cleaning the refrigerator than watching Indiana try and score. But hey, this offense looked good enough to win a title earlier this year. They’ve even done some good things in the struggle month that is March.

Fall back to the first offensive possession of the second half against Chicago last night. In a sea of garbage, it was beautiful. The Pacers freed Paul George for a wide-open three by setting some screens for him. 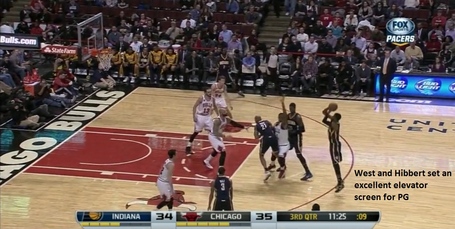 George popped up from the block through elevator screens from David West and Roy Hibbert. Great screens led to a wide open George, who knocked down the three. This is one place the Pacers should be going to more for offense to snap this mega slump.

George is struggling in March; he’s shot just 28.6 percent on threes. But when he comes off of screens, he has been phenomenal, even in March. Per Synergy Sports1, George is shooting 47.6 percent on threes in March when he runs through some screens. That means he’s at 21.4 percent when he doesn’t run through screens.

It isn’t just elevator screens. The Pacers have a variety of screens that get George and other guards open on the three-point line. They use a lot of flare screens and pin-down screens. Less frequently, they will turn to different types of screens like the elevator screen.

They use a pick the picker play, where George sets a screen for someone, then George runs off of a screen to the three-point line. 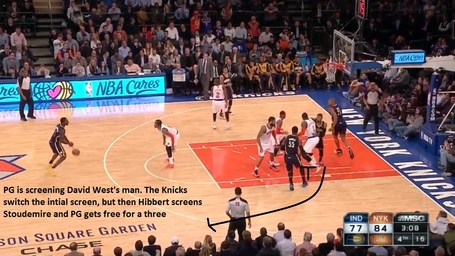 This play is most effective when defenses are switching and don’t realize there is a second screen coming. Above, Carmelo Anthony has switched off of George to pick up West. This leaves Tyson Chandler and Amare Stoudemire to deal with the Hibbert screen for George. 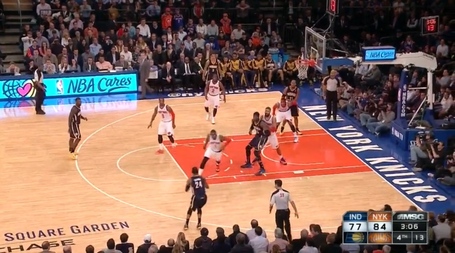 The two New York big men fail to communicate, and the result is a wide open three. The Pacers took advantage of the switching defense and the lack of communication.

Indiana has also run Paul George off of baseline screens to get him an open look either from three or the mid range. 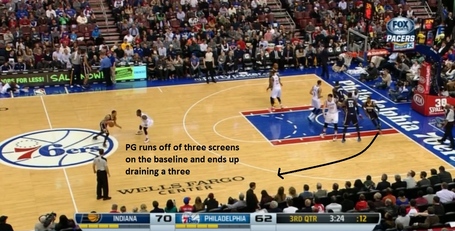 George started on the far wing and got an initial screen from West before running around Hibbert and Lance Stephenson’s screens.2

But Indiana hasn’t used these often enough. In the 14 March games, George has had just 50 possessions off of screens. That’s 3.6 per game. When the offense is struggling this bad, the Pacers would be wise to get the player with the most offensive potential running through screens.

Obviously defenses will be looking to take away open threes from George off of screens, but too often the offense has devolved into empty post ups – not just Hibbert – and unsuccessful semi-isolations. Indiana would be better trying to set up screens for George. Even if teams commit to stopping that, it can open up other opportunities, like one of the screeners popping open, which happened after George came off some baseline screens against Chicago. 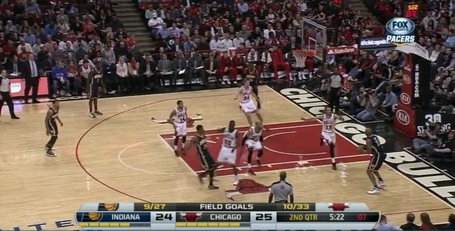 This won’t alone answer the Pacers offensive problems. Also, Frank Vogel has said the screening hasn’t been good enough to allow for good ball movement. But it would at least be a start and could possibly get George heated back up as the post season approaches.

1 Synergy isn’t perfect and it doesn't account for plays that George ran off screens but the defense stopped it, but it is a start and a good indicator.

2 I covered Ole Miss basketball for the last two season, and these baseline screens are almost identical to what Ole Miss used to get Marshall Henderson open (or contested) threes.