A lack of first half assists and settling for perimeter shots led to some frustrating comments by the Pacers' starters in the immediate aftermath of their loss in New York on Wednesday. So just how does the starting unit share the ball?

Sharing the ball, playing as a team, limiting the "hero ball" possessions were thoughts threaded throughout the post-game comments from several Pacers after their loss in New York.

Spacing along with ball and player movement usually works like a charm, but the Pacers were left stagnant by the switching defense of the Knicks which literally left them holding the ball and trying to make individual plays. Sharing the ball remained a theme of far less emotional comments the day after at Indiana's practice on Tuesday.

So how does the starting unit share the ball? In a timely bit of analysis from Andrew Bergmann at NBA.com, we have a visual representation of how the starters pass the ball between one another in games when all five played together. Bergmann used SportVU data to show the passes per game between each two-player combination for all 30 NBA starting units, as explained here.

The average number of passes were calculated from data from this season only (through Tuesday), taking into account only those games where all five players were active and saw playing time.

So the thicker the line, the more passes between two players. The full graphic with the piece reveals how some combos are prolific in their passing between one another, like Chris Paul and Blake Griffin or Ricky Rubio and Kevin Love.

Here is the Pacers' graphic. 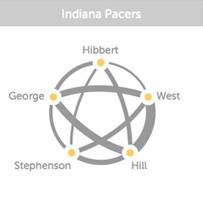 As you can see, the Pacers actually share the ball quite equitably when compared to other teams, but that thin line between Roy Hibbert and Lance Stephenson may help explain why Hibbert indicated some of his teammates needed to pass the ball a bit more.