The newest Pacer leaned on his teammates and stuck with what felt comfortable to score 13 points to help the Pacers beat the Lakers in his first game at the Fieldhouse.

Evan Turner is comfortable on the court with the ball in his hands. That much was obvious in Turner's first game with the Indiana Pacers on Tuesday, as the versatile wing wasn't shy about trying to make plays and find his shot.

"My teammates did a great job of getting me acclimated," Turner said. "They calmed me down a little bit and got me into the right situations. Once you get things flowing everything gets easier."

Turner mentioned he was "shocked" Frank Vogel called his number so often. But the key was Turner finding his comfort zone, not only within the offensive sets but also the spots on the floor where he tends to succeed. Vogel surely knew what plays to run to get Turner shots where he is more successful, but Turner also took advantage of his new teammates in the post to find his baseline money spots.

"Some of it was by design with the plays he (Vogel) called, but some of it was naturally," Turner said about how he found his spots for making shots. "The bigs do a great  job of screening and I can work my way around to where I want to go."

And more often than not, Turner wanted to go to work to get up a mid-range jumper on the baseline. As you can see from his shot chart against the Lakers, Turner made five of his six field goals on the baseline. 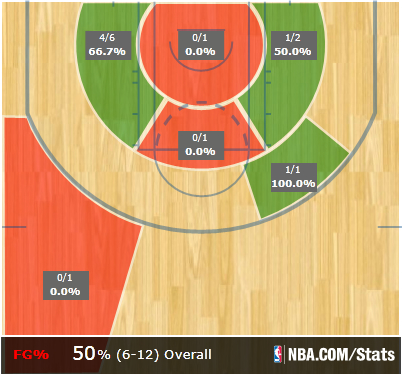 As you can see from he season totals in Philly this year, that baseline area is where Turner always likes to go to work. 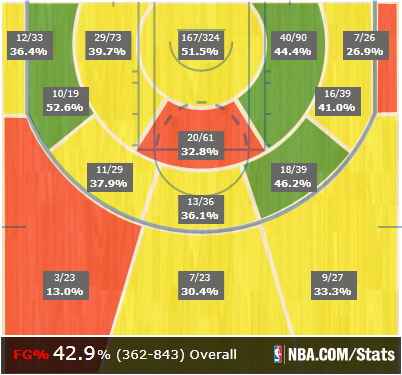 These types of shots don't come from the most efficient spot on the floor, but a made two works better than a missed three and the added dynamic of Turner's ability to create and attack with the ball while on the floor with Lance Stephenson or Paul George, opens up a new set of possibilities for the Pacers.

ET and PG shared the court at the end of both the half and third quarter. At the half, PG held the ball to create a last shot, which was an open jumper that bounced just short. Turner surprisingly took his turn to close the third and after trying to create in similar fashion to George, it appeared he was about to force up an off-balance jumper. But as the defense collapsed, Turner zipped the ball to the corner where C.J. Watson was waiting to catch and drain the open 3-ball.

With Stephenson on the reserve unit, two guys in relentless pursuit of making plays will put added pressure on opposing defenses. Watching the pair work together for the first time was exciting, but certainly not fool proof. There will be nights when the duo leaves us in awe as they shred an opponent. But surely, there will also be nights when one or both are off their game and that aggressive play drifts past attack to out of control and leaves a mess behind.

But if Lance on his own has been must-see TV, Turner only adds to the intrigue of what is possible every night with this revamped playing rotation. Both players should get plenty of opportunities to do their thing, not to mention the remain reserves who can find their spots with Lance and E.T. drawing all of the attention.

Defensively, Turner appeared to struggle in his debut. There is no doubt he delivered the effort at the defensive end. He was really trying. But he was a tick slow reacting when guarding the ball and will need a little more Dan Burke boot camp to work on technique to be more effective within the team defensive scheme that can help mask some of his individual defensive issues.

So for starters, Evan Turner allowed a glimpse at the positive possibilities he can add to the Pacers on the court. We'll see if he can maintain that type of impact consistently and maybe more importantly, how he handles an off night. Can he find ways to help when his shot isn't falling and/or the ball just isn't behaving as he'd like? Will he continue to defer as one of nine players working toward the goal of winning the game?

Turner understands the stakes are suddenly high and he is part of something bigger now after a frustrating finish to his career in Philly. Working with a title contender trying to reach their goal of winning a title requires a different approach to the game. Turner showed he was up for the challenge in his debut. At least for one game.