Indiana parted ways with long-time Pacer Danny Granger, but the Pacers received two assets that could prove to be the upgrade needed to reach the next level in the playoffs. Let’s take a look at what Evan Turner and Lavoy Allen could bring to Bankers Life Fieldhouse.

Share All sharing options for: Breaking down Evan Turner and Lavoy Allen

The big swap for the Pacers is losing Danny Granger and adding Evan Turner, presumably to bolster the bench. So looking at this season only, and per 100 possessions, how do Granger and Turner compare?

The big number that pops out is Turner’s three-point percentage. He is not the shooter that many thought the Pacers wanted to add to the bench.

Granger’s shooting struggles played a large part into why the Pacers moved him, and as you can see Turner is shooting much better from the field than Granger. Obviously, Granger hasn’t played the whole season, but his 29-game sample was big enough for Larry Bird and Kevin Pritchard to decide to part ways with number 33.

A major factor in converting Turner’s numbers in Philadelphia into what he’ll do in Indiana is his role. Turner had the third highest usage rate, 24.2 percent, in Philadelphia. He was shooting 15.4 shots per game for the 76ers, but he won’t be getting that many shots up for the Pacers.

While he certainly won’t be one of Indiana’s top options like he was for the Sixers, he could be the dominant scorer in certain lineups.

After watching some of Turner’s play this year, there a couple things that stick out in his offensive game. Because of his sub-30 three point percentage, everyone goes under ball screens set for Turner. This makes him a little easier to defend as he isn’t likely to pull up for that low-percentage three.

However, on the positive side, it does allow him get a head steam if he decides to attack the basket. If he can improve his consistency in finishing at the basket, a Turner pick-and-roll can be a good option for Indiana.

But what Turner does on these dribble handoffs is take a lot mid range jumpers. I wouldn’t expect Indiana to turn to dribble handoffs with Turner, but maybe he can work well in the Pacers end of quarter weave play.

Here is Turner’s shot chart for the season. 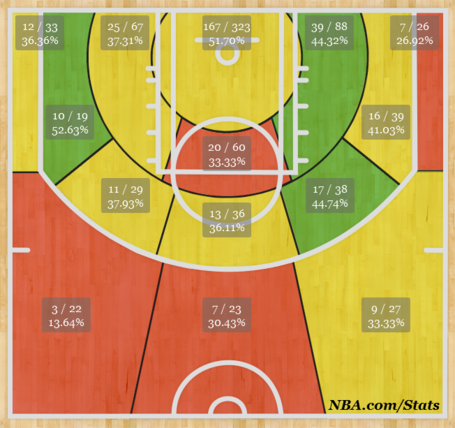 You can see Turner doesn’t shoot a lot threes, and is average around the rim. But he has excelled in going right and hitting mid range shot on that side of the floor.

And he once did this to LeBron James.

As the Pacers are all about defense, there could be a cause for concern with Turner on the defensive end. According to Synergy Sports, Turner ranks in the bottom seven percent of NBA players in defensive efficiency.

Now, Synergy isn’t perfect, and defensive efficiency has a lot to do with the team, but the bottom seven percent is worrisome. However, the Pacers wouldn’t bring someone in that they didn’t think could play on the defensive end.

Allen comes to Indiana after playing in 51 games and averaging 18.8 minutes for the Sixers. He is averaging 5.2 points on exactly 5.2 shots per game, and grabbing 5.4 rebounds. He is in his third NBA season, and his 44 percent field goal percentage is a career low, but he has never shot over 50 percent for a season.

He is a 6-foot-9, 255 pound power forward; Turner is 6-foot-7, 216 pounds. Allen ranked third on Philadelphia in efficiency differential at -9.6, among players averaging at least 15 minutes. 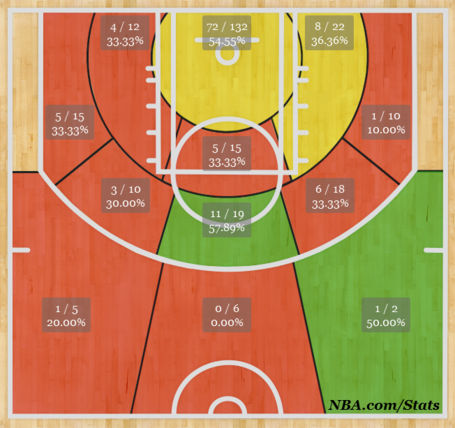 It isn’t pretty, but he is 54.6 percent around the rim, which is where most of his shots come from. He is going to be as far down as Ian Mahinmi in terms of offensive options, but he can give Frank Vogel a different type of power forward off the bench, as Luis Scola and Chris Copeland are stretch fours.

Finally, here is Mark Deeks take in on the Pacers additions, with a look to some of the financial aspects of the deal.

Indiana, meanwhile, gets two useful infusions of talent with no obvious usage for the cost of a much-declined talent with limited effectiveness. A good soldier for so many years, Granger is now a shell of his former self. The stability of his knee has gone, never to return, and with it erodes away his athleticism, defensive effectiveness and off-the-dribble game. His jump shot also seems to have fallen away, as he's unable to create the lift and separation he once did, yet he retains the shot selection of a player yet to fully make the adjustment from pseudo-star to role player. Despite his skillset being entirely different, Turner should be far more helpful.

Despite the oft-documented size of his qualifying offer this summer ($8,717,226) and his cap hold ($13,359,734), the Pacers still have a good chance of re-signing Turner should they wish. Not extending the QO does not mean they lose Turner, or his Bird right; it only means they lose the automatic matching rights that come with free agency. The cap hold is irrelevant to a team without cap space, too, and thus Turner is eminently re-signable, particularly in light of how few serious suitors he seemed to have on the trade market. Indiana has the ability to outbid anybody, and it might not even need it. Turner, then, need not only be a rental. The same is true of Allen, a useful Udonis Haslem-like role player who provides solid depth in the front court without any future salary commitment. Indiana upgrades in this deal, regardless of fit.