For all the greatness the Pacers showed on defense last year, they were below average when defending screens, especially the pick and roll. A big problem for Indiana was a lack of communication that screens were coming.

Share All sharing options for: Paul George and the Pacers struggle with defending screens last year

Last season the Indiana Pacers were one of the best, if not the best, defensive teams in the NBA. It is the main reason why a team that was 25th in points per possession on offense and had the fifth most turnovers in the NBA were able to come within one game of the NBA Finals. During the 2012-13 regular season the Pacers were the number one team in the NBA in defensive points per possession, per Synergy Sports.

However the Pacers defense struggled against screens, on and off the ball, last season. According to Synergy, of the top nine play types run against Indiana, the Pacers ranked in the top 10 in terms of points per possession in seven of them. Indiana even ranked in the top five against four of those play types. But the Pacers ranked 16th against the ball handler on a pick and rolls and 13th against players running off of screens.

The pick and roll was the second most run play against the Pacers last season as it was run 17.2 times per game by their opponents. It is slightly astonishing that Indiana could be an average team against such a frequent play and still finish number one in points per possession. It also shows just how fantastic Indiana was against all other play types.

Advanced stats for individual defense can be misleading, and shouldn’t be considered an end all be all for a player’s defensive ability. A player’s teammates have a very large effect on his defensive numbers. Consider two plays, Roy Hibbert’s block on Carmelo Anthony in game six of the Eastern Conference Semifinals and LeBron James’ game winning layup in game one of the Eastern Conference Finals. In both plays Paul George was defending a top five scorer from about 15 feet away. Both Anthony and James got by George, but only the James play hurt George’s defensive statistics because Hibbert was on the floor to erase Anthony, but George got no such help against James. Imagine if George played an entire year without Hibbert. His defensive numbers would likely be much worse.

Another thing to consider is that Paul George is drawing the best offensive player from opponents. This means he’ll guard James and Kevin Durant, but even against teams that floundered in the lottery, like the Washington Wizards, George is still defending a very talented John Wall. With that, George’s defensive numbers take a hit based on who Frank Vogel matches him up with, while other players have the luxury of guarding the fifth option of an opponent.

The teammates are important for George. He struggled the most when he wasn’t aware a screener was coming for him. This happens in transition or when an opponent runs a play that has the defense confused, but for George it happened too often when the only action was a screener coming for him while his man dribbled beyond the three point line. He needs his teammates to be better at alerting him a screen is coming. When he knows a ball screen is coming, George did an excellent job of positioning himself to properly defend his man. 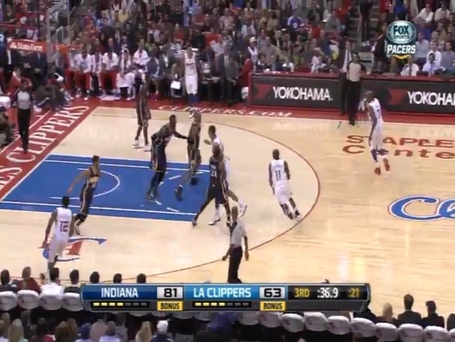 Here the Clippers ran cross action with three players near the top of the key. George is guarding Jamal Crawford and is completely blindsided by a Ryan Hollins screen at the elbow. David West and Roy Hibbert were too distracted by the crossing action to alert George of the screen. 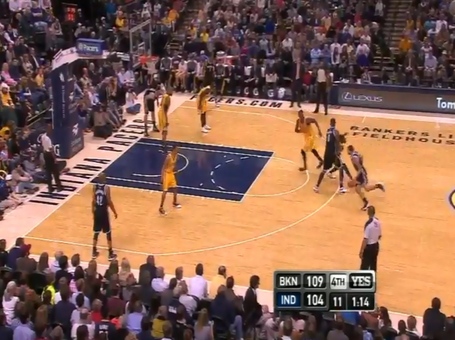 Andray Blatche originally set a screen to Deron Williams’ right. George went under that screen and got into great position, but instead of rolling to the basket, Blatche set another screen on the opposite side. George didn’t see this one coming and Hibbert wasn’t quick enough returning from his hedge to block off the open lane for Deron Williams.

Finally an important note to remember about the Pacer defense is that they do not like to switch on screens and they do not like to send help unless absolutely necessary. This tactic makes defending screens more difficult, but allows for Indiana to contest so many more shots. This was a key to Indiana leading the league in stopping spot up jumpers and why they allowed the second fewest spot up jumpers in the NBA.