Welcome to the first edition of NBA Draft Prospect of the Week series. One or two prospects will be scouted per week until the 2014 draft begins in June. First up, we have who everybody calls the next LeBron James. Maybe he is the best prospect since James, but who is his true comparison?

Share All sharing options for: 2014 NBA Draft Prospect of the Week: Andrew Wiggins

Yes, I admit it, I am obsessed with the NBA Draft and scouting prospects year-round. The 2014 draft class has been compared to the mega-class that was 2003, which included LeBron James, Carmelo Anthony, Chris Bosh, and Dwyane Wade. This upcoming draft class can match that and even top it, if they all live up to their potential.

First up in my year-long series is Andrew Wiggins, who everybody is calling the Canadian LeBron James.

Wiggins is attending Kansas this season. He chose the Jayhawks over Kentucky, Florida State, Ohio State, North Carolina, Duke, and Syracuse. Below, I will analyze Wiggins' pros and cons. Also, I will overview his game and give a pro comparison for his NBA future (media provided by Bleacher Report). Thanks to coaches from CIA Bounce (Wiggins' AAU team) and Huntington Prep (Wiggins' high school team in West Virginia) for providing me film off of hard drives over email, as I requested. There was hours of tape to look at, which helped my scouting report a ton.

As you see above in those two examples, Wiggins jumping ability gives you ooh's and aah's.

Wiggins trails Kentucky commit, Randle from the side and then uses his long 7'0" wingspan to swat the ball back and deny his dunk attempt. Andrew then takes one power hop toward the point guard's layup and obliterates the shot back to the opposing bench. Simply put, Wiggins defensive ability for a small forward is hampered by his little strength, but they still are one of the best I have seen in recent memory on film. I was tempted to compare Wiggins to LeBron in this category, but with LeBron's chase-down abilities I had to go with one of his current teammates instead.

Here is another one of Wiggins' vicious EuroSteps. Simply dirty, folks.

Also, look at the next best move in Wiggins' arsenal: the spin move. Look below at how Wiggins crosses up a point guard, calls out a screen, and then spins past the big man.

I can not remember a forward with this much handles and moves, in this millennium honestly. Wiggins is a special prospect when the ball is in his hands either in transition, fast breaks, or even on designed plays to the basket. He is great in all facets of this area.

If you are looking for an area which is Wiggins' best, attacking the rim in different ways could be exactly it.

In a lot of Wiggins' games this season, you saw him have the ball in his hands and call off all his teammates in the last seconds of a quarter, and usually makes it. That is what you call having the clutch gene, folks. I saw Wiggins many times on film for either CIA Bounce or Huntington Prep call isolations on the perimeter for him self and nobody could stop him from winning the game in the end. The other option was catch-and-shoot at the end of the game as well. Maybe Wiggins was not the best from the perimeter, but he had that clutch gene to make any shot on the floor at the end of the game. Look below at Wiggins make a buzzer-beating shot at the end of the first quarter in front of LeBron at the LeBron James Skills Academy and also a shot for CIA Bounce at the Peach Jam.

Now, check out Wiggins hit a step-up shot from mid-range, while being double-teamed at the buzzer.

Many other games I was provided over email hard-drive by AAU coaches on Wiggins' games, he made a ton of buzzer-beaters. He has the 'it' factor all NBA superstars have. Kobe Bryant has it, Dwyane Wade has it, LeBron has it, and I truly believe Wiggins also has it. I fully expect Wiggins to make tons of buzzer-beaters at Kansas next season, but also in the NBA during the 2014-2015 season.

In a piece done by NBA Draft expert, Jonathan Wasserman of Bleacher Report, he shows how Wiggins should be in the NBA next year, based on athleticism alone. 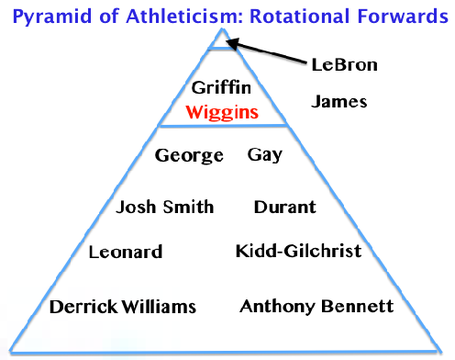 Per Wasserman's numbers, Wiggins should already be top three in the NBA at forward, in the 2014-2015 season. Wiggins' athleticism proves that point well, actually. By the numbers, Wiggins should be even better than Paul George, Kevin Durant, Rudy Gay, Josh Smith, and others. Wasserman's Pyramid of Athleticism could be debated, but he makes a great point with Wiggins on this. Outside of LeBron and Blake Griffin, nobody in the NBA will be more athletic at forward than the Canadian superstar, once he hits the NBA.

The Canadian high school superstar will need to improve basic mechanics in his shot to reach his full, sky-high potential. Just some basic hitches in his shot need to be improved for him to consistently hit both jump-shots and free throws. Wiggins shot 61-percent from the charity stripe, while at Huntington Prep. I expect that number to jump up to around 75% while at Kansas, with a coach dedicated to fixing mechanics in Bill Self. Below, is a GIF on Wiggins' shot mechanics on a free-throw shot.

As I said before, expect Andrew Wiggins to improve his shot a ton at Kansas with Bill Self as his coach.

After watching Wiggins' tape from AAU season for CIA Bounce and at Huntington Prep, I have called Wiggins a more athletically gifted version of Wade. I believe the comparisons between LeBron and Wiggins are a little overboard. They honestly are more similar in cons than in pros. Both needed to fix their shot and have Hall of Fame potential.

Just like how LeBron is compared to Michael Jordan, which honestly does not make much sense to me, Wiggins being compared to LeBron is the same. I think Larry Bird is more realistic for LeBron, while Wiggins is more an all-around better version of Dwyane Wade.

Thanks to Bleacher Report for the GIFs provided for this article. This will be a weekly thing until we hit the draft in June 2014. Let me know your thoughts on my scouting report on Wiggins below!