Offensive Struggles Linger For The Pacers

The book on the Pacers was written well before the playoffs started - elite defensive team, struggles to score consistently. Winning two of their first three games against the Knicks has put them in the driver's seat, but the offensive struggles have persisted to troubling degree.

Share All sharing options for: Offensive Struggles Linger For The Pacers

It hasn't just been the matchup with the Knicks that is causing the problem. The Pacers are now averaging 99.3 points per 100 possessions in the playoffs, significantly worse than every remaining playoff team except the Knicks and the Bulls.

Obviously both the defensive intensity and the level of competition go up in the playoffs, so some decline is to be expected. But the tightening that's happening to the Pacers' offense is at another level. It just hasn't been as noticeable because their defense has been unbelieveable and they're still winning games. This combination of woeful offense and all-universe defense may be enough to get them past the Knicks, but there's a hulking behemoth lying in wait, and there's no way it works against Miami.

As the offense has declined in the playoffs it's also undergone some significant changes. This first graph shows the percentage of offensive possessions the Pacers used in different situations in the regular season and the against the Hawks and Knicks. All numbers are from mySynergySports. 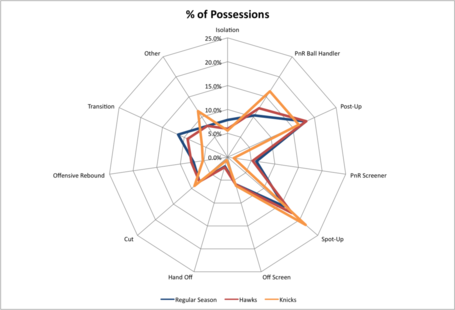 The first change we see is the slow unbalancing of the Pacers' pick-and-roll. The percent of possessions finished by the pick-and-roll ball handler has climbed from 10.4% in the regular season to 16.4% in this series against the Knicks. Meanwhile, the number of possessions finished by the screener has shrunk all the way down to 4. Just to be clear, that's not 4%, it's 4 total possessions in three games. Early in the season the Pacers' pick-and-roll was hugely ineffective. Ball handlers, George Hill in particular, almost pathologically refused to attack the paint. The result was that the defense didn't need to adjust as aggressively on him and had plenty of time to recover to David West. This improved over the course of the season, but the team still finished ranked 21st in efficiency on plays finished by the ball handler and 25th in efficiency on those finished by the screener.

The point is that it's good to see more aggression from the ball-handler, but the pick-and-roll is most useful when it is a multi-dimensional tool. If Hill, Stephenson and George aren't consistently creating shots both for themselves and the screener out of these sets, they again become much easier to defend.

One of the other reasons possessions used by the pick-and-roll screener have decreased is that the Pacers are getting more spot-up opportunities, both out of the pick-and-roll and other types of initial action. In theory that's a good thing, but we'll talk in a minute about how it isn't working out as planned.

The last, and most troubling change, we see in this graph is the huge decrease in transition opportunities. The Pacers' ran selectively during the regular season, but it was a huge crutch for the offensive efficiency and they were very successful when they did. After making up 11.4% of their offensive possessions in the regular season, they've been able to get out in transition just 5.9% of the time against the Knicks.

This next graph looks at the same possession categories, but compares efficiency in points per possession from the regular season and each playoff series. 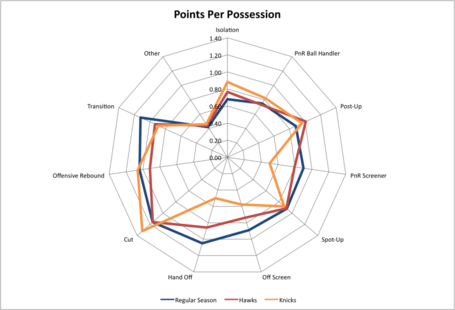 The decline and increase in in efficiency from hand offs and isolations are fairly meaningless since they make up such a small percentage of the Pacers' offense. Returning to the pick-and-roll we see that the aggressiveness of pick-and-roll ball handlers against the Knicks has generated good returns in the efficiency department, improving on both their regular season and first round averages. However, it's still a less efficient option than what their pick-and-roll screeners generated during the regular season and finding a more healthy balance there could really go along way towards lifting the entire offense.

The other two big areas of concern are spot-ups and transition possessions. In addition to the decline in frequency, the Pacers' have also been generating far fewer points in transition against the Knicks - just 0.89 points per possession, compared to their season-long average of 1.12. The per possession numbers make the difference seem small, but per 100 possessions that's a difference of 23 points. The Knicks have done a great job of pushing back, but the Pacers' really need George and Stephenson to be taking defensive rebounds the other direction in a hurry, putting pressure on the defense.

The decline in spot-up shooting has been troubling as well, from 0.92 points per possession in the regular season to 0.88 against the Knicks, although this drop-off doesn't seem as extreme since the Pacers weren't a terrific outside shooting team to begin with. Altogether Indiana is shooting just 32.1% on three-pointers in the second round. In the playoffs, George is at 26.9%, Stephenson is at 26.7%, Hill is at 33.9%, and then we have D.J. Augustin clocking in at 37.5%. That number is terrific and a vast improvement over where he was in the regular season. Unfortunately, if we remove his 4-5 performance in Game 1 against the Knicks, his 3PT% falls to 29.7%.

I know it's passe to be ragging on Augustin at this point, but but almost every metric he is killing the Pacers offense. Frank Vogel has been doing the best he can to hide Augustin, getting rest for Hill, George and Stephenson in stages and making sure that least one, and sometimes two, of them are on the floor with him at all times. But his AstRatio is down to 14.0, about the same as Al Horford's playoff mark. He's a defensive liability, is doing nothing in the shot creation department, and other than one hot game, has been shooting just as poorly as he has over the rest of the season. I know the other options aren't thrilling, but it seems like one solution to some of these offensive problems is to cut Augustin's minutes even further.

Orlando Johnson has been glued to the end of the bench through both series, only finding his way onto the court in blowouts. During the regular season he was at least as reliable an outside shooter and a much better offensive creator off the dribble. The minutes with Augustin have been so catastrophic that it's tough to imagine Johnson could make things worse. As long as Vogel is committed to keeping either Stephenson or Hill on the floor, it seems like Johnson would make a better complement. It would not be entirely without precedent - Hill and Johnson played 174 minutes together in the regular season, outscoring the opposition by 5.5 points per 100 possessions. Johnson and Stephenson played 66 minutes together, and although they were outscored by a fraction of a point per 100 possessions, they boasted a healthy scoring average, 104.4 points per 100 possessions.

The Pacers have to feel good about the games they've won but hopefully there is plenty of recognition that those wins have been earned with a formula that will need to be improved. Whether it's with rotation tweaks, more offensive balance, or just plain luck, they're in desperate need of an offensive boost.