Pacers Finding Success All Over The Court

Through their first two games it seems like everything has been working for the Pacers. Paul George has been a primal force at both ends of the floor and the offense seems to have found a wellspring of creative flexibility. What are the specific successes they can celebrate as the series shifts to Atlanta?

Share All sharing options for: Pacers Finding Success All Over The Court

In Game 1 the defensive combination of Kyle Korver and DeShawn Stevenson struggled mightily with Paul George. His on-the-ball offense has been shaky at times this season but he repeatedly got into the teeth of the defense, both on isolations and off the pick-and-roll, making great decisions with the ball. The Hawks began Game 2 clearly determined to keep him out of the lane. They actually began the game with Devin Harris defending George, switching Korver onto Lance Stephenson. Harris is at a tremendous size disadvantage but his quick feet and quick hands are elements that give George trouble as a ball-handler. The Hawks backed Harris up with quick rotations, often sagging off shooters or sending extra help to keep George above the free throw line and to get the ball out of his hands.

In this play George pushes the ball up the court quickly trying to take advantage of the fact that Korver is in front of him. He uses a high screen from Hibbert and tries to take the ball down the lane, but both Horford and Ivan Johnson jump in to cut him off, and the result is a fadeaway jumpshot from the free throw line.

The combination of Harris and extra attention from the Hawks' big men clearly affected George, and three of his first five shot attempts were long two-pointers. However, the Pacers and George smoothly adjusted and didn't fall into the trap of forcing their action into the teeth of the Hawks' defense. They found ways to move him into different spaces on the floor and create offensive options for him without relying so heavily on high ball screens.

In this play George makes the low-post entry pass to Hibbert and then cuts baseline. The Pacers run this action often but usually with the passer cutting down the lane, which seemed to be what Harris was expecting. Hibbert holds the ball long enough to bump off Harris, before making a nifty drop pass to George for the layup.

The Pacers ran almost this exact same set a few minutes later, this time with Hansbrough in place of Hibbert. Josh Smith is defending George at this point and Hansbrough isn't able to create much separation for him. But after George clears through Hansbrough makes his own move to the basket, drawing Smith's attention. As Smith is watching the ball Jeff Pendergraph slips in to set a back screen, allowing George to drift out to the corner for an open three-pointer.

The Pacers' didn't just create off-the-ball opportunities for George, they also changed the shape of their offense to remove pressure when he did have the ball in his hands. Here Pendergrpah sets a backscreen across the lane on Smith, freeing George to catch the ball cleanly on the right wing. Hawks' rookie, Mike Scott, is not much of a threat to help at the rim and having D.J. Augustin and Gerald Green at the three-point line holds the Hawks' guards in place. Pendergraph fades, pulling Horford away from the play and allowing George to attack Smith off the dribble before he can fully recover.

As Jared Dubin pointed out at HoopChalk, the Pacers also kept the Hawks defense back on their heels with a mix of creative and brutish post-up possessions. The combination of individual interior domination and fluid off-the-ball screening and movement also led to a wealth of open perimeter shots. The Pacers have made 17 of 44 three-pointers (38.6%) through two games, after hitting just 34.7% in the regular season.

The Pacers have struggled at time this season to shift gears offensively, so seeing them move smoothly from a dribble-drive attack led by George, to a focus on posting up and moving without the ball was really encouraging. All of the elements of the Pacers' lofty offensive goals, the ones they've been struggling to consistently hold together all season long, are finally falling into place the way Frank Vogel envisioned. So far the Pacers' offense has been averaging 117.8 points per 100 possessions, the best mark in these playoffs, and a full 5.0 points better than the second-best offense, the Oklahoma City Thunder. The ability to attack a defense in different ways, adjusting to defensive pressure, and allowing those elements of attack to complement each other has been the Pacers' white whale, and could be the key to a lengthy playoff run.

Adjustments at the offensive end are not the only positive the Pacers can take away from the first two games. Although their playoff Defensive Rating of 102.8 is considerably higher than their regular season average, they've still done some really good things at the defensive end.

Horford and Smith have both been limited by foul trouble, but the Pacers have also done a terrific job of keeping them away from the places where they have an advantage. Smith has attempted just 25 shots in the first two games, and although he's shooting 56.0% from the field, 14 of those shots came from outside of 8ft. The Pacers have been pushing him towards catching the ball on the perimeter and he's been more than happy to oblige by forcing shots. Even if it happens to go in, any perimeter jumpshot by Smith is a defensive victory for the Pacers. 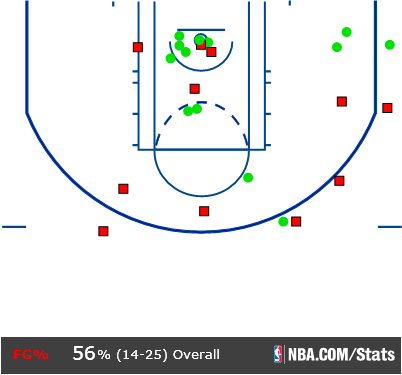 We see a similar pattern with Horford. He's shooting well, 52.3%, but has attempted just 23 shots in two games. More than half of those shots have been mid-range jumpers.The dominant narrative heading into this series was that the offensive matchup between Roy Hibbert and Horford was a wash. Horford couldn't handle Hibbert in the post and Hibbert wouldn't be able to stay with Horford in the pick-and-roll game. This is true to a certain degree, but represents a frustratingly simplistic view of basketball. Defense, and pick-and-roll defense in particular, is a collaborative effort and success or failure depends on the actions of more than just one individual defender. When trying to stymie Horford and the Hawks' pick-and-roll, the Pacers' defense has to be able to flex in several places without breaking.

In the play below they recognize the situation and personnel and are able to accomplish their goals in near textbook fashion. As Jeff Teague comes off the Horford screen, Hibbert sags off keeping Teague out of the lane. Although he's isn't the quickest big man, Hibbert's length is a huge advantage here as he's able to space Teague but still be close enough to contest a possible shot. George stays close to Korver in the corner, but again length is an advantage, allowing him to be a step towards Teague and still close enough to recover to his man. Teague makes the bounce pass to Horford who, as expected has popped out to the elbow. As he takes his jumpshot, Hibbert is able to recover and contest.

Here's another example for the opposite side of the court, defended with Stephenson instead of George, staying home on Harris in the corner.

Horford is a terrific mid-range shooter, but the Pacers know he is more likely to take that shot than roll to the rim. Even with his mid-range accuracy they would much prefer him to shoot, make or miss, than any of the other options. The key is to prevent shots in the paint and three-pointers from the corner. So far it's worked beautifully. Of the 54 Hawks' pick-and-roll possessions finished by either the ball-handler or the screener in this series, just 13 have resulted in a shot at the rim.

The one player who can really throw a monkey wrench at the Pacers' pick-and-roll defense is Teague. His quickness and ability to change speeds with the ball in his hand can really put pressure on the big man defender. In the 1st half of Game 2 he repeatedly burned the Pacers, using his quickness to get into the lane both in transition and in the half-court.

Going into the half Teague had scored 16 points on 7-12 from the field, with 8 of those shot attempts coming at the rim. But in the second half the Pacers made some defensive changes held him to no points on 0-4 shooting. The adjustment came from the Pacers' bigs who sagged off a little more, working hard to create a wall between Teague and the basket. In this play Hibbert retreats way off Horford to keep himself in front of Teague. Because of Smith's foul trouble Johan Petro is also on the court for the Hawks and West has no problem leaving him to provide a little extra attention. The result is a one-on-three and a turnover.

In this next play Teague attempted to push the ball in transition but was well defended by Hill, helped out by Pendergraph's rotation and a collapsing George. The result is another turnover.

The game is well in hand at this point but the Pacers continue to stick with their defensive principles. Here Teague turns the corner easily on Hill, but runs into a balanced, retreating Hibbert who gets a little help from George, cheating in off the corner. Teague pulls up for the floater, which Hibbert gets a hand on.

In addition to all the creativity and execution we've seen at both ends of the floor, the Pacers have been able to find success with a handful of lineups that looked fairly shaky heading into the playoffs. At the end of the regular season, Vogel told Grantland's Zach Lowe that combinations of bench bigs were worrisome and that keeping either West or Hibbert on the floor at all times was going to be a big priority. However, Vogel has already used the Hansbrough/Pendergraph combination for 13 minutes, during which they've performed more than admirably. In those minutes the Pacers have maintained an edge, outscoring the Hawks 29-26, and posting a Defensive Rating of 98.8.

One other really interesting look that we got to see in Game 2 was a Hill/Augustin backcourt. They played just 133 minutes together in the regular season during which the offense really struggled, averaging just 99.9 points per 100 possessions. But in their quick four minute stint on Wednesday night the Pacers scored 12 points. Augustin looked really free moving off the ball and half of those 12 points came from a pair of three-pointers he hit. Moving forward the Pacers are better off the less minutes Augustin plays, but the option of getting him going a little by working off the ball and exploiting specific matchups is certainly intriguing.

Things will obviously get tougher as the series moves to Atlanta. But the Pacers have to feel really good about how they won the first two games, not just the margin of victory. Although it still hasn't been in peak form, their defense has played well and managed the Hawks' adjustments. At the other end of the floor the Pacers' have struggled all season long with a blunt, robotic offensive attack. But through the first two games the ball is moving all of the court, and their sets have been a brilliant mix of proactivity and reactivity. Offense sets the ceiling for the Pacers in these playoffs and in their two games at home they appear to have ratcheted it up several notches.

Statistical support for this story from NBA.com and mySynergySports.com