Knocking down the open shot

Defenses are sagging off of Lance Stephenson leaving him with open threes. Despite struggling to connect from deep in his short career, Stephenson has begun to make opponents pay by draining three pointers.

Share All sharing options for: Knocking down the open shot

Off to an 8-0 start, Indiana has been dominant so far this season, with four wins coming by double-digits. Lance Stephenson’s rise as an offensive threat early in the season has been a major component of the Pacers fast start.

Stephenson’s offensive production has increased because of a huge improvement in his shooting. With some offseason help, Stephenson improved his shot, and the payout for him and Indiana has been immediate. Take a look at his shot chart so far this season. 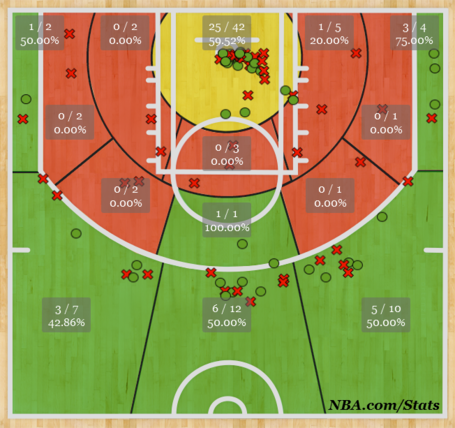 Although it is a small sample size, that is a lot of green from beyond the arc. Stephenson is 18-35 (51.4 percent) from three-point range so far this season, a huge improvement from his career mark of 29.5 percent (66-223) on three pointers before this year. (He even struggled in his lone college year at Cincinnati where he shot 21.9 percent on three pointers.)

His career struggles have allowed defenses to play off of him in order to provide help on the rest of the Pacers weapons. So far this season, opponents are still sagging off of Stephenson, but this year he has made them pay. 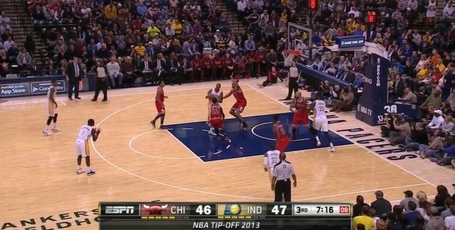 Here against Chicago, Kirk Hinrich has gone all the way into the lane to double David West. West dished the ball out to a wide open Stephenson. 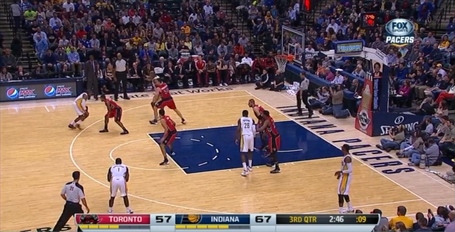 Landry Fields of Toronto has sunk all the way to free throw line to potentially provide help defense on C.J. Watson, despite Stephenson being one pass away.

This is the type of defense a 29.5 percent three point shooter will get, but as Stephenson has improved he has made defenses pay for leaving him. If he continues his hot shooting it’ll force defenses to stay closer to him and open more open space for the rest of the offense. Stephenson has been more than a fourth scoring option for the Pacers this year.

Not only is Stephenson knocking down open threes when the defense leaves him, but Indiana has run a quick hitting play to get him an open three at the top of the key.

Typically, Paul George runs from the corner off of a screen to the block on the other side of the court. Stephenson has the ball on the wing and gets it to George in a post up. But instead of looking to score on the block, George is looking for Stephenson, who gets a screen from David West. West comes from the top of the key to set the screen and Stephenson floats behind to get open. 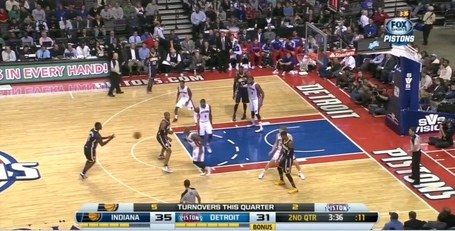 There’s even an element of defenses helping off of Stephenson on this play as Tony Allen’s first move after George caught the ball was a step towards the basket. 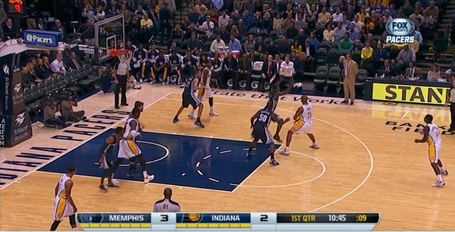 Indiana has also done this with Orlando Johnson in place of George and with Roy Hibbert posting up.

It is a very quick, simple play that Indiana can run at anytime. It also shows the confidence that Frank Vogel has in Stephenson to have a quick hitting play for him to shoot a three.

On all spot up plays, Stephenson is scoring 1.58 points per possession, 12th best in the NBA. He’s shooting 56.5 percent off of spot ups and has an effective field goal percentage of 80.4 percent. Last season he scored just .93 points per possession on spot ups, while shooting 37.1 percent with an effective field goal percentage of 50.4, per Synergy Sports.