2013-14 Indiana Pacers Season Preview: All in to win one more game

The NBA blog previews are in full swing so here is our look at the Pacers upcoming season which promises to be exciting.

Share All sharing options for: 2013-14 Indiana Pacers Season Preview: All in to win one more game

With the 2013-14 NBA season approaching, SB Nation is previewing all 30 teams from a variety of angles. Here is our look at what is in store this season for the Indiana Pacers.

1. What significant moves were made during the off-season?

The Pacers weren't happy with the production from their bench last season and spent July and August completely rebuilding the reserve unit. Gone are D.J. Augustin, Gerald Green, Sam Young and draft pick Miles Plumlee after one tour of duty with the blue and gold. The most high-profile departure was letting former first round pick Tyler Hansbrough leave via free agency after his rookie contract ended. Hansbrough brought a unique style of play to the court which often put the smash in Frank Vogel's smash-mouth basketball, but his struggles to consistently produce while also trying to force his offense left the Pacers willing to let him sign with Toronto. 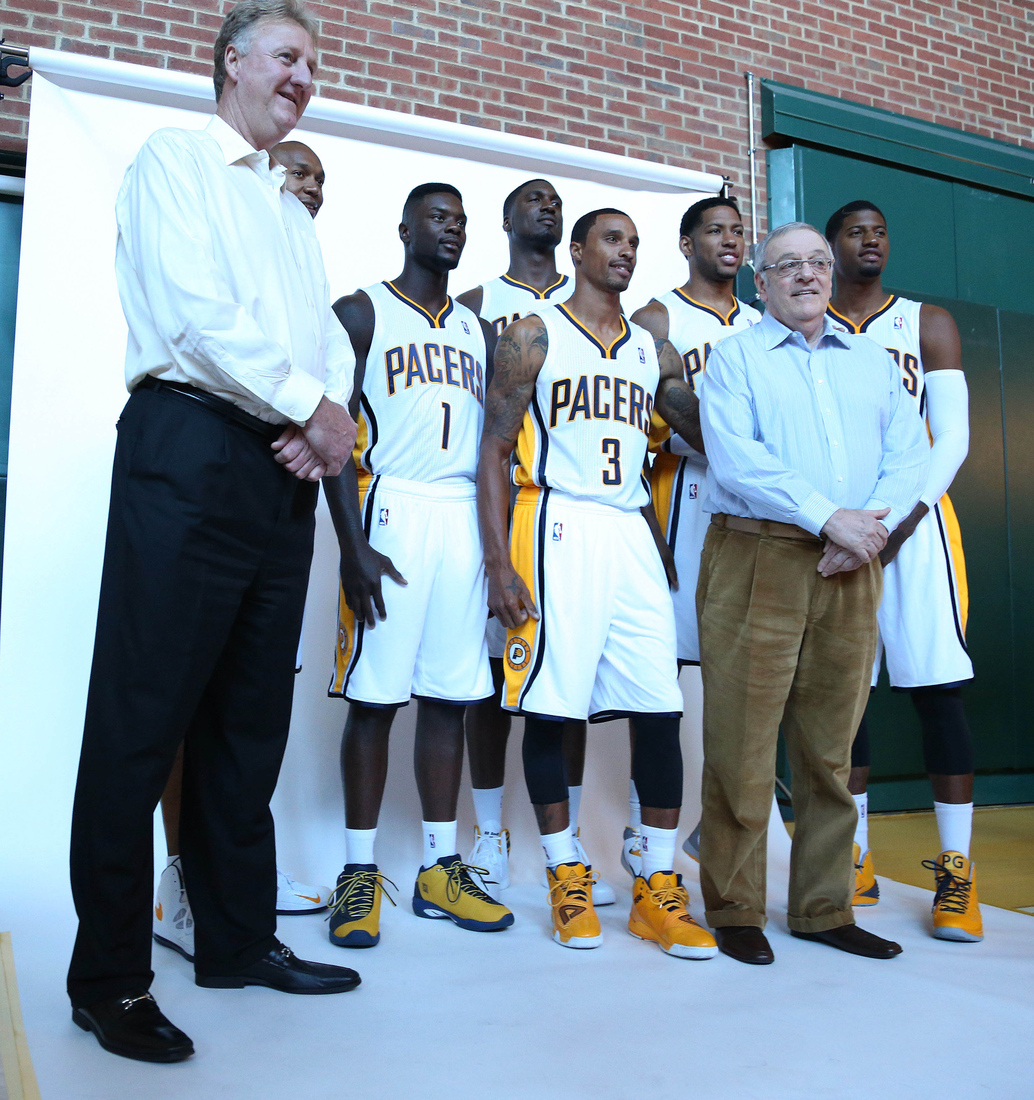 The Pacers not only looked to revamp the bench with talent, but also maturity and playoff experience. In desperate need of a backup point guard, the Pacers had a chance to chose one late in the first round of the draft, but the Pacers are in it to win this year, so a rookie wasn't the answer to fill an immediate need. Instead, Larry Bird tapped veteran backup C.J. Watson to slide into the reserve rotation. Watson has given the Pacers plenty of fits over the years and should be a good fit on the roster with his ability to handle point guard duties while defending and knocking down three-point shots when it matters.

Bird wasn't done, though and went on to solve two problems with one trade. Gerald Green is a dynamic wing but simply wasn't working out for the Pacers. With two years and $7 million remaining on his contract, Green was taking up valuable cap space on the roster. Fortunately, the Phoenix Suns were looking to rebuild and absorbed Green's deal along with rookie Miles Plumlee in exchange for veteran forward, Luis Scola. Bird has long had his eye on Scola who should add a solid power forward option off the bench with plenty of offensive skills. Scola's days of starting are behind him but in a reserve role that doesn't require heavy minutes, he should be a solid contributor to an improved bench.

Other new additions include sharp-shooting Chris Copeland who parlayed a fantastic season with the New York Knicks into a multi-year contract with the Pacers. Copeland will be a true stretch four off the bench and also be able to fill in some small forward minutes. His role may fluctuate from night to night, but he gives Vogel another option to utilize against the right matchups.

Rookie first round pick, Solomon Hill may have trouble cracking the playing rotation but he has been a pleasant surprise thus far. Hill has shown he's a smart player who understands how to play as part of a five-man unit with a genuine desire to defend. That should keep him in the mix for any leftover wing minutes and may end up squeezing him into the regular rotation.

2. What are the team's biggest strengths?

The Pacers biggest strengths are their depth and willingness to defend and rebound at a high level. The sheer length of the Pacers starting unit combines with their defensive mind-set to make life difficult on any other team. George Hill has a 6'9 wingspan, despite his 6'3 size. Lance Stephenson checks in at 6'10, Paul George at 7'0, David West at 7'4 and Roy Hibbert at 7'5. That's a lot of length to get in passing lanes and disrupt shots.

The Pacers led the NBA in defensive efficiency last season and will need to remain among the league's elite at the defensive end. The team defensive approach will be tested since newcomers Scola and Copeland are considered more offensive-minded off the bench.

The deep playing rotation and versatile options with Copeland, Solomon Hill and Lance Stephenson being able to play multiple positions gives Vogel plenty of ways to attack regardless of the opponent's style of play. That depth also allows the Pacers to work through the regular season without forcing heavy minutes on any starters which should help towards the end of the marathon NBA season when it counts the most in the playoffs.

3. What are the team's biggest weaknesses?

The Pacers biggest weakness has been at the offensive end of the floor which they tried to address in the offseason. The return of Danny Granger to a regular role, whether as a starter or reserve, should also give a boost to the offense. While the starting unit was among the best in the league last season, the bulk of that success is attributed to their defensive capabilities. With Paul George emerging as a streaky scoring option and Roy Hibbert struggling through the regular season last year, David West was the only offensive option the team could lean on.

Both George and Hibbert should be able to carry a bigger offensive load on a consistent basis this season. The bogged down half court offense that struggled to even execute a simple post-entry pass at times last year, needs to play at a little faster pace and look to seize scoring opportunities more aggressively. Vogel preaches making the extra pass in his team-oriented approach, but when passing up an open look for the extra pass the offense can get stuck scrambling for a shot late in the clock. Pushing the pace and looking to attack more in transition should create more scoring opportunities for players now ready to play the role of scorers.

4. What are the goals for this team?

The Pacers always want to improve on their past season which will be a challenging feat this season. In order to take the next step, the Pacers have to win ONE more game and advance to the NBA Finals. Every move they made this offseason indicates that winning that extra game is indeed their goal. With Danny Granger's contract expiring next year and some tough decisions about Lance Stephenson, this will likely be the last time this whole crew plays together so, as Larry Bird said a few weeks ago, the Pacers are all in this year.

More: All of SB Nation's NBA previews to date

Part of accomplishing that goal is taking care of business in the regular season. David West laid it out on Media Day, saying the Pacers need to make sure they have home court advantage for any possible Game 7's in the playoffs. Last season, the third seed meant they had to travel to Miami to play Game 7 of the Eastern Conference finals. The experience didn't go well and fueled the Pacers efforts to improve in the offseason. The value of playing that type of game at Bankers Life Fieldhouse would be immense and certainly taking the top spot in the East is a goal the Pacers have in their sights.

5. How will Frank Vogel manage the playing rotation?

The return of Danny Grangers and emergence of Solomon Hill along with second-year wing Orlando Johnson leave the Pacers with more players than they can regularly play. Chris Copeland will play mostly at power forward but could play some wing minutes. Luis Scola is a perfect backup for David West, but the two could play together with Scola at center against certain teams. C.J. Watson, George Hill and Lance Stephenson can all play both guard positions, while Paul George and Solomon Hill can play both wing spots. If the team wants to go small, Danny Granger can play the power forward spot as he has in the past.

Options. The Pacers resemble a Rubik's cube with all of the playing combinations they can trot out on the court. Frank Vogel preaches positivity and no doubt considers all of those options a good problem to have for a coach. But it also opens up Vogel for some legitimate criticism depending on how he handles the rotation.

In prior seasons, Vogel has been working with a developing core of talent and a less-than-effective bench which he was able to coerce into exceeding expectations against what often appeared like more talented opponents. That talent gap is shrinking despite still lacking a top ten superstar, but there is more than enough talent for the Pacers to remain in the mix atop the Eastern Conference from the start of the season. Unlike last year, the bench actually needs to deliver, but if they do that will set up Vogel to pull the right strings at the right time to turn this into a special year. If he can't, the excuses of the past will no longer carry any weight.

Bottom Line: I predict the Pacers will win 55 games this season, which seems like a lot of games but in reality isn't a huge jump from last season. The Pacers started poorly last year and struggled with an anemic bench, but still won 49 games. With the upgraded reserve rotation and Danny Granger adding to the offensive punch, the Pacers should expect to compete for the top seed in the East. With Derrick Rose back, the revamped Nets and the Heat, the East will be a strong test this season. But the Pacers are built to pass that test in the playoffs and once they make it to the post season, they will be able to pursue an NBA championship in earnest.