Will Stanko Barac Ever Come Over?

Share All sharing options for: Will Stanko Barac Ever Come Over? 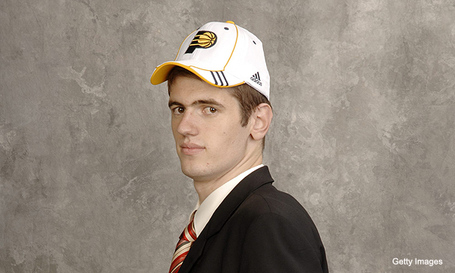 If you remember back in 2007 we didn't have a draft pick and Larry Bird promised he would get into the draft and he surely did. He got the rights to the 39th pick which belonged to the Miami Heat and he received the Bosnian big man in Stanko Barac. Stanko was born in Bosnia, but he plays for the Croatian national team and Efes Istanbul in Turkey.

The question is if the now 25 year old Barac will ever come over and play for the Pacers?

Indiana surely needs more size in the frontcourt, but we will likely have to wait longer for the 7-1 Bosnian. He's signed through 2015 with his team in Turkey (Efes Istanbul). By that time Stanko will be 28 headed toward the 2015-2016 season. By that time likely Danny will be gone and likely David West too. That opens the door right up for Stanko to come in a get some minutes right away. Having him backup Roy Hibbert at center or starting at power forward would be fun to watch.

The question is if Stanko will ever come over and play in the NBA? We drafted Erazem Lorbek back in 2005, but he decided to stay overseas for his career. His rights were traded on draft night last year in the George Hill trade. Barac has great potential to succeed, but he might be just another Lorbek.

Stanko is a great rebounder and has a very high field goal percentage playing for Efes Istanbul this last season. He struggles with quickly getting fouls though. That's why he only averages about 20 minutes a game for Efes. Barac can hit the 15 foot shot as well, which could be a very great weapon if he decides to ever come over.

If you're mind has gone blank on Stanko, here's some videos of him:

After watching these videos, I surely hope Stanko decides to come over once his contract is done with Efes Istanbul in 2015 or we buy him out before then. Once we slowly inch closer and closer toward the 2015-2016 season, Stanko will become a hot topic for the Pacers.

Do you think Stanko will ever come over and play for the Indiana Pacers? Vote on the poll below and share your opinions on the 7-1 Bosnian.