The 2008-09 Indiana Pacers were a collection of odd pieces that started the team's rebuild in earnest when Jermaine O'Neal was dealt earlier in the summer which added rookies Roy Hibbert and Brandon Rush along with Josh McRoberts, Jarrett Jack and T.J. Ford to mediocre roster under Jim O'Brien.

One thing that stands out in hindsight is the lack of leadership among the top players on that roster. Everyone kind of took care of themselves, didn't rock the boat too much and rarely held anyone accountable in the locker room. But they did have one exceptional effort to shake things up that ultimately became a failure in facial hair.

The team had just lost 10 of 15 games and two in a row on the road. So Mike Dunleavy made the boldest leadership move during his time with the Pacers and talked several players into growing mustaches in an effort at team building. The key was, no other facial hair was allowed, just a classic mustache.

Dunleavy set the parameters on a Tuesday, giving teammates until the next game on Thursday to clean up any beards and grow the 'stache. Well, that was easier said than done. Jeff Foster grew his 'stache by dinner time on Tuesday, but it wasn't so easy for others. Travis Diener and Troy Murphy in particular defined wispy to the point that Murph had a bottle of Just For Men in his locker to add a little texture, or at least the appearance of texture, to the fuzz on his upper lip.

Much like the season, this effort with so much potential, fizzled out rather quickly. After winning the first two games in the 'Stache Era, a 24-point loss to the Orlando Magic was quite the (ahem) fuzz kill and within a week the hype and 'staches faded away.

Just another reminder to appreciate the major improvement this team has made in the past few years. After the jump, check out Troy Murphy's fuzzy 'stache. 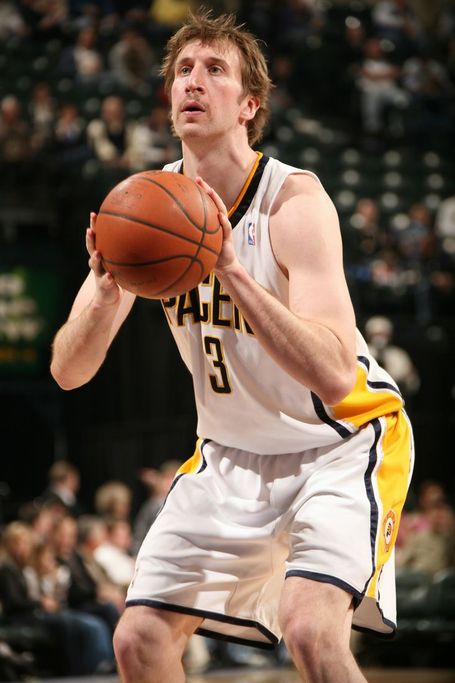