Are Paul George's notable numbers a trend to trust this time?

Pacers young wing players continues to show signs of the impact player the Pacers need him to be going forward.

Share All sharing options for: Are Paul George's notable numbers a trend to trust this time?

Indiana Pacers forward Paul George has put up some notable numbers of late and shown more than just flashes of turning that young promising talent into a productive piece of the puzzle the Pacers can rely, not just this year but for years to come.

We've seen the flashes before.

The 30 points in Dallas on Feb. 3 last season followed by scoring 20 points just once in the remaining 12 games of the month of February while scoring in single digits three times.

The 3-point fueled 37 points against New Orleans soon followed by four points in Sacramento and zero points at Golden State. Worse are the shooting nights hovering around 30% from the field. The eight games this year with at least three turnovers.

PG is only 22 but his talent makes us all impatient. So once again, his production of late along with a maturing approach to preparing to play big each night has expectation trending towards the moon.

Whether it sticks this time or not, it is hard not to be impressed by PG's play the past week. Here's a couple of interesting nuggets.

In Bird's second season, he scored zero points in a game against Golden State and then went out and led the Celtics past Portland with 33 points. Hopefully, PG ends up closer to Bird than J-Rich in career similarities when all is said and done.

That's some nice company and highlights the ability PG brings to the Pacers lineup. Not only that, but as Jared Wade displays, PG is keeping his complete game on point. Defense remains a strong point as he takes on the opponent's top threat (Batum had 5 points on Wednesday), but he's also making plays on the pass while beginning to limit the turnovers.

So will PG continue building on his recent play to help the Pacers continue winning more than they lose? No more floating through a series of games with tentative play and poor shooting? If so, the Pacers should remain in good shape until this guy returns to the court in a uniform. 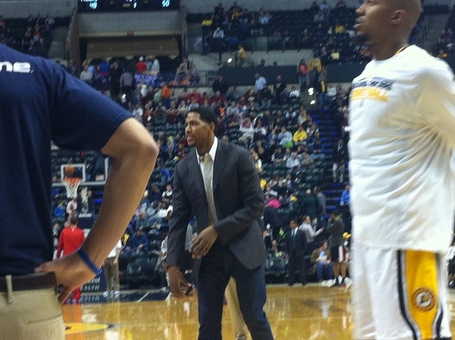