Pacers Take Advantage Of Their Schedule

Things seemed to have turned for the Central Division-leading Pacers, but how far have they really come in the last month and a half?

Share All sharing options for: Pacers Take Advantage Of Their Schedule

Since November 16th, the Pacers are 13-6. They have the stingiest per possession defense in the league and have staggered back into the playoff hunt. They currently hold the fourth playoff slot in the Eastern Conference and are creeping up in many national power rankings. Most importantly the offense has started to improve. Up to November 16th the Pacers were averaging just 93.7 points per 100 possessions, 29th in the league. Since that date they've been scoring 100.4 points per 100 possessions, 21st in the league.

All of those things would seem to indicate a team on the rise, a team that has solved some of it's fundamental problems and a team that has started to regain some of the magical on-court chemistry that drove their run last season. All of those things may be true to some degree, but unfortunately they've also been inflated by a somewhat easy schedule. 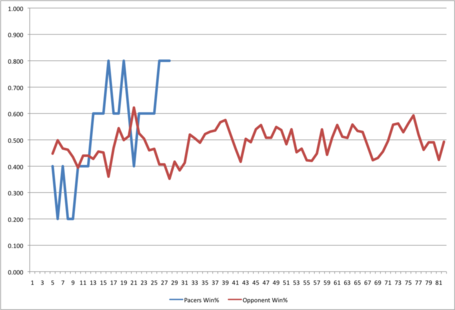 The graph makes it look like the Pacers got right just as their schedule got tough and that they kept winning as their schedule got easier. But the truth is that even in that more difficult stretch the Pacers were only winning games games against other struggling teams. As of right now the Pacers are 1-4 against playoff teams in the East, with that lone coming against the Bulls on December 4th. They are 1-5 against playoff teams in the West. Their other 14 wins have come against Toronto, Sacramento (twice), Washington (twice), Dallas, New Orleans (twice), Los Angeles, Cleveland (twice), Philadelphia, Detroit, and Utah. That means more than a third of the Pacers' wins have come against the three worst teams in the league - Cleveland, Washington and New Orleans.

The bottom line is that wins are wins, regardless of who they come against, and there is no denying that the Pacers are in a much better place than they were a month ago. David West and George Hill have taken on leadership roles. Paul George has shed his malaise and found his offense. Lance Stephenson is healthy, Gerald Green is contributing and the defense is elite. The problem is that all that improvement still has translated into wins against good teams.

Not counting the rescheduled contest with Chicago, the Pacers have 11 games between now and the end of January. Of those 11 games, just 4 come against team not currently slotted to make the playoffs. Besides this peak in difficulty, the graph above shows the Pacers have at least three more stretches this season where the level of competition will rise significantly. My point is not to say the Pacers have nothing to celebrate, but instead point out the incredible amount of works that still remains to be done. The offense, although better, still hasn't been anywhere near good enough. The Pacers' still find themselves in the bottom third of the league in nearly every offensive category. Holding the Knicks to 88 points is meaningless when you can only muster 76.

The good news is that the Pacers have momentum on their side. It may have been built on the backs of the Cavaliers and the Hornets, but as they look forward to upcoming games against the Knicks, Grizzlies, Hawks and Heat, the Pacers can breathe a little easier with the knowledge that the playoffs no longer seem hopelessly in doubt, that even if their on-court performance doesn't indicate it, their record puts them in a position of strength. They are a team that has rediscovered winning basketball. Now they must prove to themselves that winning basketball games, regardless of the opponent.