The Pacers' offense finally made an appearance Friday night against the Dallas Mavericks. Sunday afternoon against the Knicks it was nowhere to be found. Why are the Pacers' struggling so much offensively, and what can they do to fix things?

Share All sharing options for: Pacers still searching for an offensive remedy

For one glorious night it seemed like the Pacers had found their offense. The 108.4 Offensive Rating they hung on Dallas was a season high, by a margin of 7.3 points. The Pacers recorded 23 assists in that game, also a season high. Three days later all those good feelings have been erased by an atrocious performance against the Knicks that saw Indiana shoot 39.4% from the field and turn the ball over 19 times.

Word on the street Friday evening was that the Pacers' had used their shoot-around that morning to refocus their offensive principles, emphasizing player movement, pace and ball reversals. Following a huge win with a crushing loss, courtesy of the same anemic offense, was not the way the Pacers were hoping to start their week. If we are going to examine this new version of the Indiana offense we need to start by comparing it to what existed previously.

I pulled out on set as an examplar of what the offense has looked like for most of the season. The Pacers' have mangled this set in variety of ways, but here is a particularly illustrative example from last Wednesday's crushing loss to the Milwaukee Bucks. 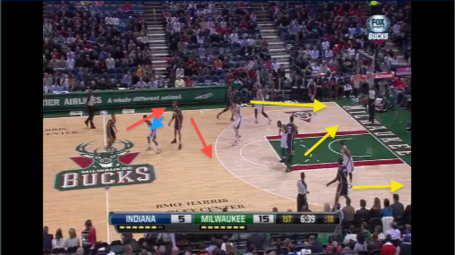 As the play begins the Pacers are clearly setting up to a run a high pick-and-roll with George Hill and David West. Paul George, Lance Stephenson and Roy Hibbert are all retreating to the baseline. West ends up setting the screen on Brandon Jennings' right side and Hill curls around the screen, coming back to his right, following the path of the red arrows. 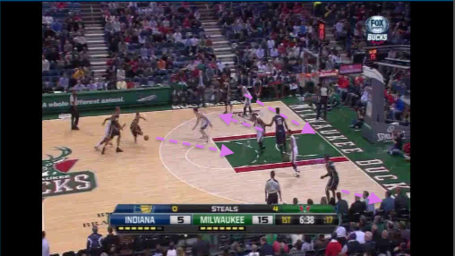 These purple arrows are not the actual action of the play, but rather my interpretation of where there are openings. Hill has curled around the screen and has Jennings trailing. West's man, Ersan Ilyasova has dropped back giving Hill plenty of space to chew up. With his momentum it seems like there would be space for continuing to drive down the lane. While Hill would be heading for congestion, he would also have step on Ilyasova and put himself in good position to draw a foul, or at the very least move the defense. There is an opening for Stephenson to drift further back towards the corner giving Hill more space to make a pass his way. It would also be interesting to see Hibbert move out of the lane and set a back screen on George's man, allowing him a cutting lane to the basket. Of course none of those things actually happen. 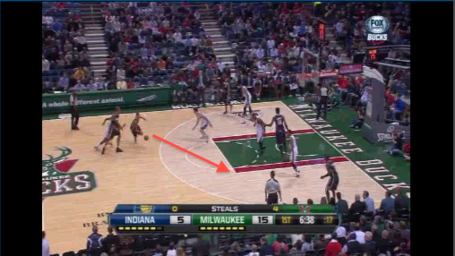 Instead, Hibbert, Stephenson and George take themselves completely out of the play by standing in the exact same spots for the rest of the possession. Rather than continuing to attack and putting pressure on Ilyasova, Hill slows the pace of his dribble and drifts to the far side of the free throw line. 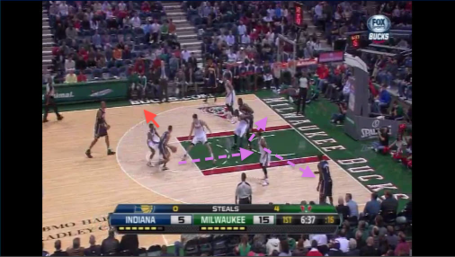 Even here it still seems like Hill has some reasonable options. He has Ilyasova turned and there is still space to be taken. Another dribble towards the paint may draw Hibbert's defender and leave an opening for an interior pass or short lob. He also may draw Stephenson's defender with the potential for an open three, or the opportunity for Lance to drive into the teeth of a disorganized defense. Instead you can see all of Hill's attention is directed towards West and he's not even pretending to look at the basket. The end result is a lazy and clearly telegraphed pass to West that's stolen and taken the other way by the Bucks. Here's the play in real time:

Even more troubling is the Pacers' spot-up shooting, a possession type where they're averaging 0.85 points per possession, 26th in the league. All of these struggles are tied together. Spot-ups opportunities, which are among the most efficient scoring chances on average, come when the defense is moved by well executed pick-and-rolls, post-ups and isolations. The Pacers' can't turn any of those things into scoring chances on their own and so they aren't creating good spot-up looks. I mean it's almost unfathomable that the Pacers' could have Stephenson playing big minutes, shooting 45.8% on three-pointers, and still only be making 30.5% of their three-pointers as a team.

Against the Mavericks the Pacers used 21 possessions on spot-up opportunities, scoring 1.29 points per possession, a season-high. Before the game, Hill and Frank Vogel spoke in generalities about some of the offensive changes they'd worked on at shoot-around to promote player and ball movement. Let's take a look at one spot-up three pointer from the Mavs game and see what looks different. 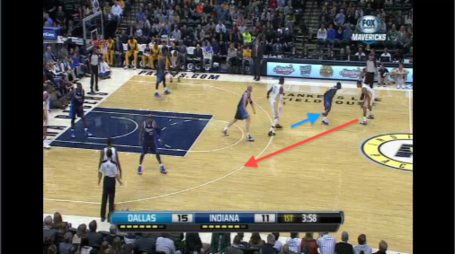 Again, we're looking at a set that begins with a high pick-and-roll, this time between Hill and Hibbert. The other three Pacers - West, Stephenson and George are again essentially flat along the baseline. 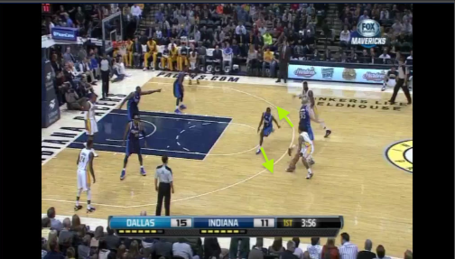 Chris Kaman does a good job hedging, keeping Hill from turning the corner and allowing Collison to recover, still giving himself time to get back to Hibbert. In this picture Collison's momentum is going one direction while Hill has already stopped and is going to back to his right. Kaman has his back turned and seems like there might be an opportunity to split the two and drive towards the free throw line. 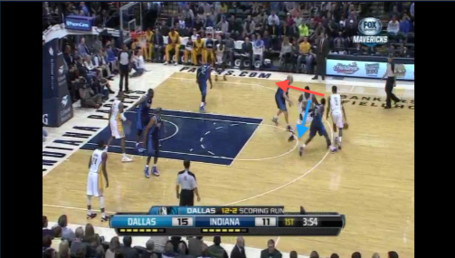 Instead, Hill calmly waits and allows Hibbert to set up another high screen, going the other direction. Four seconds have come off the clock since this play began and neither George, West or Stephenson has moved more than a step. You may also noticed that Stephenson is still bent over, grabbing his shorts, as he was at the beginning of the play. 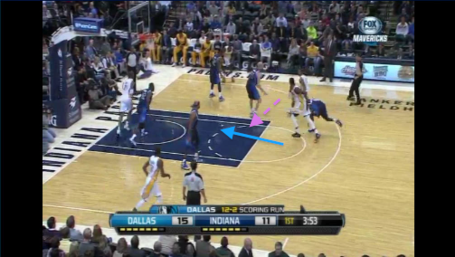 As Hill turns the corner Collison has stumbled over the screen. Kaman has hedged much harder than on the first screen and there appears to be plenty of space for a pocket bounce pass to the rolling Hibbert. 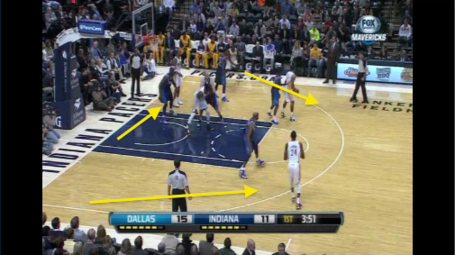 Instead of making the pass to Hibbert, Hill picks up his dribble and finds himself stranded 18ft. from the basket. At this point the three other Pacers spring into action. West slides across the lane, George moves out towards the top of the key and Stephenson begins to curl around Hill, bailing him out by taking the hand off. 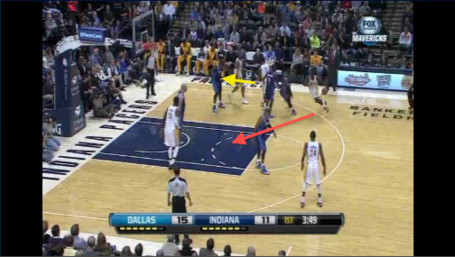 Stephenson takes the ball and continues his curl, driving into the lane. Hill fades to the corner to take Stephenson's space, with his back to the ball. Neither George or Hibbert seems to be particularly interested in making themselves a target to receive the ball. 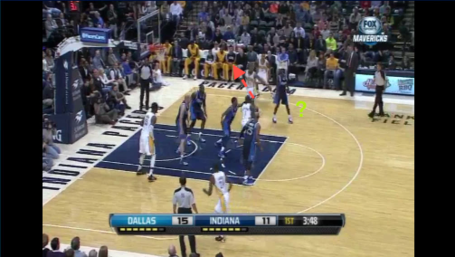 Arriving in the lane, Stephenson also picks up his dribble and strands himself. Luckily for the Pacers, Collison has completely lost track of Hill, allowing him to drift into the corner where Stephenson can kick it out for the open three-pointer. Here's the play in real time:

When I compare these two plays, the pick-and-roll against the Bucks and the spot up three-pointer against the Mavericks, we have two very different results. However, I see way too many similar elements for my own liking. Both plays began with an extremely passive pick-and-roll. Kudos to Hill for setting up another pick-and-roll rather than forcing a pass to Hibbert, but the fact that Plan B was exactly the same as Plan A isn't exactly comforting. By my count Hill made three clear mistakes on this one play - missing the opportunity to drive, missing Hibbert rolling off the second screen and picking up his dribble 18ft. from the basket. An aggressive drive by Stephenson and horrible defense by his counterpart are what gave Hill the opportunity to knock down the open shot. I don't see any trace of improved pacing or ball movement.

I know I'm being a little harsh with George Hill. For the most part he played a terrific game against Dallas and helped the Pacers' get a win they desperately needed. I also know I'm picking out one play and using it to represent an entire game's worth of offense. But after watching the roller coaster ride from the Bucks, up to the Mavericks and bottoming out again at the Knicks, I'm not sure anything looks fundamentally different about the design or execution of the Pacers offense. Call me cynical but this problem may take more than a single shoot-around around to fix.

I know just enough about the X's and O's of basketball to sound credible in my criticism. I broke down play that stood out for me from the Dallas game, and couldn't even stomach re-watching any tape of the Knicks game. I'm sure I'm missing many elements that more astute observers than myself will be happy to point out. But I still think something is missing.

I wrote a post today at Hickory-High breaking down some of the offensive sets the Grizzlies used last week to beat the Heat, Thunder and Knicks. In particular I looked at the different ways Memphis used Marc Gasol to create opportunities for himself and his teammates. I may be reaching here but everyone of those sets seemed like something the Pacers have the personnel to create a reasonable facsimile of with Hibbert in place of Gasol. Hibbert rarely has the opportunity to catch the ball near the free throw line these days, and his Ast% is just 8.7%, the third straight season it's declined. There are probably several ways to attack the Pacers' offensive problems, but my preference would be to see the Pacers' mix it up by bringing Hibbert out high, setting up some high-low action with West or allowing him to kick out to shooters.

Regardless of whether or not Vogel and the coaching staff agrees with me, it's clear there is a lot more work to be done. Refocusing on movement and pace are well intentioned and meaningful changes, but the Pacers may need to actually take the leap and install some new sets during the season. Better execution of vanilla offensive plays still leaves a cap on how effective the offense can be.