The Indiana Pacers regular starting lineup is on the NBA All-Star ballot this year even if they haven't played a game together yet.

With a nod to far better times for the Indiana Pacers and the success they had at the end of last season, the NBA All-Star ballot includes all five Pacers starters from last season's playoff run.

Regardless, you can still stuff the ballot for the blue and gold with Roy Hibbert, David West and Danny Granger all on the ballot for frontcourt players. Don't think Hibbert has to worry about getting hosed with no center on the ballot this year. Also, George Hill and Paul George are on the ballot as guards players.

Not only are all of those players on the ballot, but you can vote for 'em all at once. 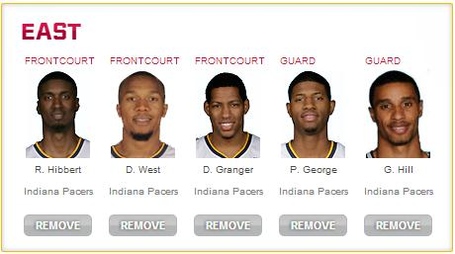 2013 NBA All-Star Balloting presented by Sprint gives fans around the world the opportunity to vote daily for their favorite players as starters for the 2013 NBA All-Star Game in Houston. For the first time ever, NBA fans can vote via social media networks, including Facebook and Twitter, and Sina Weibo and Tencent QQ in China.