Roy Hibbert has played terrific basketball to start the season. I'll admit it's tough to shed memories of last December and January when his production dropped off precipitously, but he looks like a different player than we've seen at any point previously. He's shooting a career high 52.6% from the field, and his rebound percentages are as high as they've ever been at both ends of the floor. His minutes per game are up for the fourth year in a row and, most importantly, the Pacers have been much better when he's in the game, something that wasn't always the case last year, even when he was producing.

The biggest improvement is they way he's been scoring in the post. According to mySynergySports, Hibbert is scoring 0.94 points per possession on post-ups, the 14th best mark in the league this young season, shooting 51.9%. Last season that mark was 0.81 points per possession, 107th in the league, with a FG% of 41.5%. I think we were all expecting some changes in the offense, but mostly of the David West pick-and-pop variety. Instead, Hibbert on the low block has become the center of the Pacers' attack.

Credit for this new interior forcefulness has gone to new relaxation exercises and off-season work and communication with Tim Duncan. A strengthened mind-body connection makes plenty of sense. When you watch him in the post he does look different. Nothing has obviously changed with his body, but he looks much more balanced both in establishing position, and working for his shot. His movements are also much more purposeful -everything is moving towards the basket or open space, instead of sideways or backwards. But I think the biggest difference has to do with timing.

If I had to use one word to describe Hibbert's post possessions over the past few seasons, lengthy would be my selection. I'm using that word chronologically, not anatomically. From the hundreds of possessions I've watched, my brain can construct a composite memory of Hibbert catching the ball on the low block, waiting patiently for the passer to cut across the lane, clearing out an entire side of the floor. There are then two or three static dribbles as his body bangs into the entrenched defender, before he pivots through the lane for a running hook shot. The whole process takes several seconds, and in the past did not always work out as intended, with a quality look at the basket created.

But that mental construction is not what I've seen this year. Through the first 12 games of this season it seemed like everything was happening much quicker. Thanks to mySynergySports I was able to check this. I watched video clips of all 101 of his post-up possessions for this season and timed them, from the moment he received the ball to the moment he either took a shot, was fouled, or turned the ball over. I then split those possessions into four categories based on their length: less than 2 seconds, 2 to 4 seconds, 4 to 6 seconds, more than 6 seconds.

We'll start with what works. The table below shows his FG% by possession length from this season and last.

Like almost any other post player, Hibbert is at his most effective when he can catch and finish. He is not a Hakeem Olajuwon, a collector of post moves and counter-moves. His damage is done with length and touch, so I was surprised to see that for both this season and last his next most efficient scoring opportunities came on the longest possessions. Whatever has given him the new attention to balance and forcefulness has made him more effective across the board, especially on those catch and finish opportunities. These next two charts show the percentages of Hibbert's post-up possessions that fell into each category, this season and last. 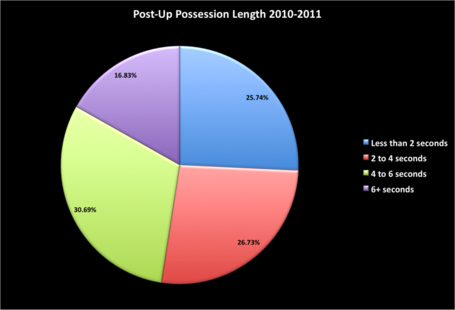 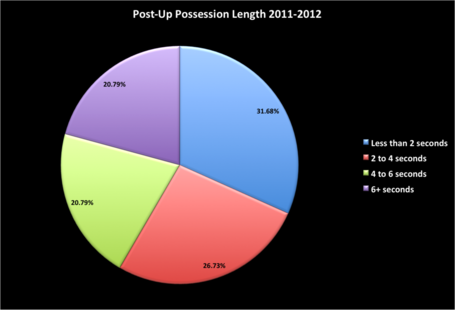 Last season, 47.52% of his post possessions lasted longer than 4 seconds. This season just 41.58% have lasted that long. His under 2 second possessions, the catch and finish opportunities where shoots 64.0%, now account for 31.68% of his post-up possessions. Numerically, those aren't seismic changes but they've having big results. Hibbert is making more shots, but a major reason for that is he's getting better shots.

Hibbert, the Pacers' coaching staff, and his teammates all deserve to be applauded for this change. Hibbert is playing more under control, using his physical tools to maximize matchups. He's also establishing better post position and doing a much better job of sealing his defender to make these quick hitters a reality. Finally, he's making split-second decisions, and good ones at that. Instead of reading the defense with the ball in his hand, establishing a plan to get to the rim, he's reading and reacting as he makes his move, before the defense has time to set.

Frank Vogel and his staff have put in some simple pieces to provide scaffolding for Hibbert. Last season, you saw the same thing on almost every post possession - the mental image I conjured above, the ball was entered followed by a cutter, usually the passer, coming through. Hibbert's scoring almost seemed to be the second option, with a quick pass to the cutter as the first choice. Vogel took over from Jim O'Brien and moved this action from the high post to the low block, a step in the right direction, but the principle remained the same. This meant that Hibbert was left holding the ball for 2 or 3 seconds as his defender was allowed to get set while a frequently half-hearted cut was initiated.

Now, instead of having him running down the floor in a straight line, banging his body into a defender to establish position, the Pacers seem to be running a lot more action for him across the lane, screening as he moves from block to block while the ball is reversed around the perimeter, or having Hibbert set a downscreen for a perimeter player before popping open into the lane. They've moved the focus from getting the ball to him and expecting him to create a scoring opportunity, to actually creating scoring opportunities for him.

His teammates are helping those opportunities materialize. Darren Collison, George Hill and Paul George are looking for Hibbert in the post, every trip down the floor, delivering the ball on time and to empty space. When the passer cuts through the lane, the cuts are quicker and aggressive keeping the defense off balance.

The Pacers' are 9-3 to start the season. Not everything is working offensively but they've found a piece to build around, a center with enough gravity to hold everything together. As the other pieces (West's pick-and-pop, Granger's perimeter shooting, Collison and George's slashing) are pulled in, they should settle into a very efficient orbit around Hibbert's interior scoring.