The Pacers have just four games left in the regular season;a three game homestand against the Wizards, Hawks and Knicks, before finishing on the road against the Magic. Making the playoffs seems likely at this point, but unfortunately not assured. The team's performance and energylevel have been extremely up and down the past few weeks, not what you'd expect from a team fighting for it's first playoff berth in five seasons. If the Pacers are going to make the playoffs, let along create any excitement upon their arrival, they have four more games to put together consistent effort and get their production trending in a positive direction.

With four games left, I've identified four reasonable goals I think the team needs to focus on. There's plenty to work on but it's a little late to be making wholesale changes. These are four things we have seen from the Pacers at different points this season. The idea is, as much as possible, to make these things consistent habits as the regular season wraps up. Whether these positive patterns can benefit the Pacers in the playoffs, or as a stepping stone to improvement next season, remains to be seen.

Goal #1 - Get Back to the Free Throw Line

The table below shows the five-game rolling average for the Pacers' Free Throw Rate (FTA/FGA). The black vertical line marks when Frank Vogel took over. 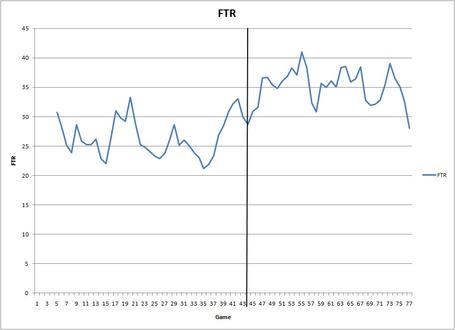 Under Vogel, the Pacers have been getting to the free throw line at a rate unseen in Indiana for several years. However, over the past five games there has been a precipitous decline in that rate. The Pacers will need this weapon in their offensive arsenal in the playoffs. It could give them a chance to negate the front-court depth of Boston or Chicago;or to exploit Miami's lack of bigs. Getting the ball inside and drawing contact will need to be a consistent focus against whoever they play, the Pacers might as well start working on that consistent focus now. If the playoffs disastrously aren't in their future, it can help build a more aggressive mindset looking to next year.

Goal #2 - Find Their Outside Stroke

The Pacers shot 31.6% on three-pointers in the month of March. They've made just 31.7% of their three-pointers over their last ten games. Several players have contributed heavily to the team's struggles:

I hate to pick on the young guys, but the Pacers will need much, much more from Price and George ststay competitive in a playoff series. Danny Granger will also need to pick up his percentages quite a bit. It's good to see Rush and Collison knocking down outside shots consistently, and hopefully the return of Mike Dunleavy will help as well.

Some of you might be curious why I included Josh McRoberts on this list. Through the end of December, he'd made 17 of 48 three-pointers, 35.4%. Since then he's made 6, on only 12 attempts. I'm all for McRoberts being selective, but he's demonstrated that he can make that shot, on at least a somewhat consistent basis. Lately defenders have been giving him huge amounts of space handling the ball on the perimeter. If he can take and make a few of those wide open three-pointers, it will force the defense to adjust, opening driving lanes and passing angles.

Goal #3 - Take Care of the Basketball

The Pacers' Turnovers per Game increased from January to February. They then increased again from February to March. They turned the ball over 15.6 times per game in March, their highest total for any month since their three games in October. On the season the Pacers have the third-lowestA/TO ratio in the league, at 1.27. They won't have the luxury of making mistakes against teams like Chicago, Miami and Boston. The Pacers' offense needs ball movement to be efficient, but the ball needs to be moved with purpose and decisiveness.

To be consistently competitive during a playoff series the Pacers' will need Hansbrough at his wide-eyed, frothy-lipped best. They don't need him to consistently hit any statistical benchmarks. They need him to be efficient with his opportunities, be it on 10 or 20 shots a game. They need him to bang bodies and fight for loose balls. Through inspiration or shame, depending on the specific case, the Pacersneed Hansbrough's maximum effort to draw the same from his teammates.

Over these next four games they need to do whatever it takes to work him into a lather. Create a fake twitter account and circulate some jokes about Poplar Bluff, Missouri. Coax someone from the Bulls's scouting department to make some negative comments about his brother's chances of playing in the NBA. Whatever it takes to get the veins popping out of his neck.

I've tried to choose my words carefully regarding a Pacers' appearance in the playoffs. The teamreally has two aims over the next week and a half. They need to lock down that final playoff spot. They also need to do what they can to prepare themselves mentally and physically for what, hopefully, lies ahead. Luckily, these two aims coincide perfectly. The answer seems rather simple. Play hard, every minute of every game. Be physical. Make shots. Value each possession. Of course if the Pacers' had been doing that all season I'd have no reason to be writing this.