Tom had a great post yesterday, discussing Josh McRoberts' contributions in the win against Boston. The general theme was that in that particular game, and across much of the season, statistics haven't always done a good job of measuring his impact. The piece even led off with this quote from McRoberts:

"I don't think I'm ever going to be a numbers guys," Josh McRoberts said when asked about his impact on the Indiana Pacers win over the Boston Celtics last night. "If you just look at stat lines, you're probably not going to be too impressed with me."

I hate to disagree with you Mr. McRoberts, but I think you're wrong. I believe you are a numbers guy, and I've been impressed with your statlines almost all season.

Let's start with some of his basic per 36 minute statistics:

Wild fluctuations in McRoberts' minutes this season make his per game statistics misleading. When we look at his per 36 minutes statistics here, we see a player who providing extremely efficient and versatile production. Using Basketball-Reference's Play Index I was able to identify all the other players in the league who average at least 10 points, 8 rebounds, 3 assists, 1 steal and 1 block per 36 minutes. It didn't take long because there are only three of them:

McRoberts doesn't have the upside of Smith or Cousins. He's not the defender that Martin or Smith are. However, in his low-usage role he's clearly the most efficient offensive player of the three, and provides similarly versatile production.

By almost any metric this year he's been hugely impressive. You like Wins Produced? How about a WP48 of 0.172, (0.100 is average) with a total of 5.2 Wins Produced this season, second most on the team. Maybe you're more of the Win Shares persuasion. Does a WS48 of 0.142 and 4.3 total Wins Shares, both second on the team, sound about right? Is John Hollinger your man? Well McRoberts' PER is up to 15.8. That's two straight seasons of improvement. You like On Court/Off Court stats? Well the Pacers are +4.5 points per 100 possessions with him on the floor. I forgot to mention he also leads the team in TS% at 60.6%, one of only 22 players in the league who have played over 1,000 minutes with a TS% over 60.0%. No offense Mr. McRoberts, but I think there are plenty of numbers proving your positive impact on the team.

The power forward position was a huge question mark as the season began. There have been many disappointments over the past few months but I don't think power forward production can be considered one of them. 82games.com tracks the performance by position for each team. The table below is a compilation of that data for each team's power forward rotation. All numbers are per 48 minutes. 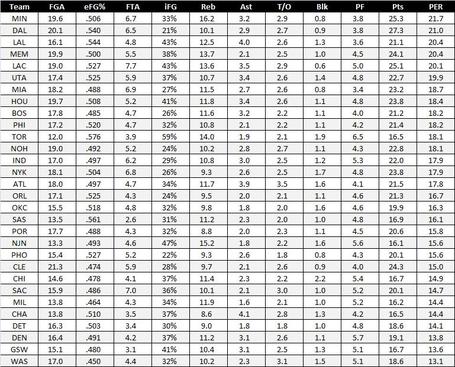 The Pacers power forward rotation offered the 13th best combined PER this season. That's not terrific, but I for one would have been thrilled if my crystal ball told me this summer that the Pacers would get even average production from that position. Also, imagine what those numbers would look like if the James Posey experiment hadn't lasted so long.

The Pacers' have a very difficult decision to make regarding McRoberts this off-season. He will be an unrestricted free-agent and should be in line for a healthy and well-deserved raise. The combination of McRoberts and Hansbrough has been good, not great, and the team might not want to commit to it as a long-term blueprint. I'm ambivalent about that pairing as a long term solution, but I think it deserves mentioning that neither player is close to being a finished product.

Although he's wrapping up his 4th NBA season, McRoberts has played only 2,273 career minutes. That's less than John Wall has played THIS SEASON. At 24 years old he may be at the peak of his athleticism. I would argue that hasn't come close to peaking yet in terms of understanding the game and taking advantage of his talents. Imagine his versatile skill set with a little bit of veteran saavy. That's not a recipe for an All-Star, but I think it's the recipe for a guy who could play a significant role on a championship caliber team. His outside shooting is a perfect example of his room for growth.

McRoberts has only attempt 9 three-pointers since Frank Vogel took over. His reluctance to take the shot makes me think it was explicitly discouraged by Vogel. I'm not sure why. Although he's attempted only 60 this season, he's knocked down 23 of them. That works out to 38.3%, the best mark on the team. I'm not advocating him going all Troy Murphy on us, but if A.J. Price is going to keep taking 7.2 three-pointers per 40 minutes, while shooting 27.9%, than McRoberts should have the green light to let it fly a little more often. Especially given how much space opposing teams have been giving him with the ball beyond the three point line.

My heart hopes that I'm not watching the last days of the Josh McRoberts era. My brain is holding out hope that a McRoberts/Hansbrough/John Henson or Kenneth Faried three-headed monster might be a workable solution. Either way, he's proven that he's a legitimate NBA power forward and you don't have to look far to find statistics to prove it.