Skill curves were introduced by Dean Oliver, in his book, Basketball on Paper. They're a way of representing diminishing returns when it comes to the relationship between a player's Usage Rate and their Offensive Rating. Usage Rate is the percentage of a team's offensive possessions a player uses when they're on the floor. Offensive Rating is a measure of a player's offensive efficiency, how many points they create for their team per 100 possessions.

To introduce the idea behind skill curves, let's look at the Miami Heat. Of players playing at least 15 minutes per game, the most efficient offensive player on the Heat this season is James Jones, with an Offensive Rating of 126. That's significantly better than LeBron James' 115 or Dwyane Wade's 112. However, James is able to be this efficient because he uses just 12.4% of the Heat's possessions while he's on the floor. If he was asked to use more than 30% of their possessions, like LeBron and Wade, there's no way he could be as efficient. A skill curve graphs a player's Offensive Rating against their Usage Rate to try and identify what levels of usage they're most efficient at.

In the comments to that post, Justin Arnold, asked if I could put together skills curves for Josh McRoberts and Brandon Rush. Mr. Arnold, your wish is my command. I even did you one better, adding skill curves for A.J. Price and Dahntay Jones as well.

Again, Oliver's method for creating skill curves is not revealed in his book, so what I've put together here is an approximation. I started with each player's game log for this season and ordered it by his Usage Rate for each individual game. I then took a five-game rolling average of his Offensive Rating. I graphed that rolling average and fit a trendline to it. This method is far from exact.

The R^2 value on the graph is a measure of how well the trendline fits the data. An R^2 value of 1.0 would be a perfect match. The closer that value is to 1.0 the better a match the trendline is for the data. For each player's skill curve I marked, with a red vertical line, their average Usage Rate for the season. 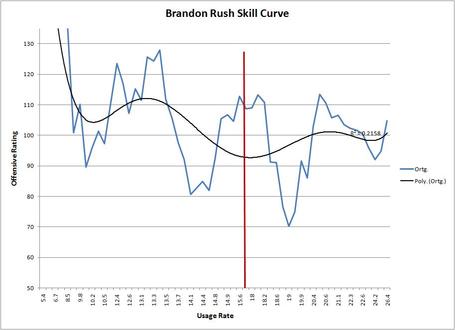 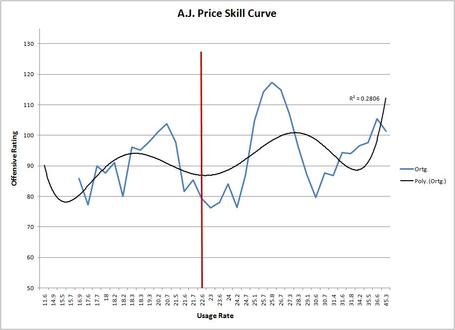 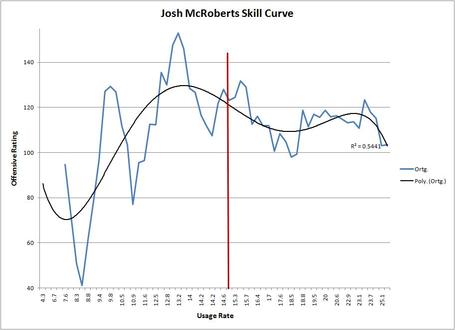 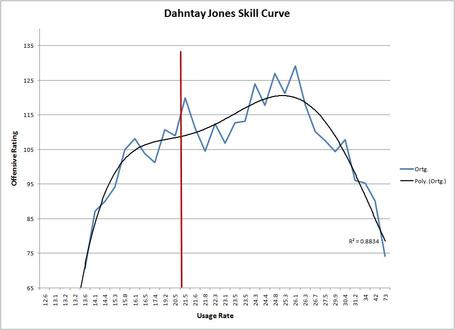 These curves are not as accurate as the ones we looked at on Tuesday for a few reasons. All four of these players have gone through stretches where they didn't play. Less games means less data points, which means it's harder to accurately identify trends. The second is that McRoberts and Rush have fluctuated between starting and coming off the bench. Each plays a much different offensive role, depending on which unit they are on the floor with. Still, there are some interesting implications.

Brandon Rush and Josh McRoberts both look like they could be more efficient using slightly fewer possessions although neither of their trendlines is a particularly good match. Both Price and Jones appear like they could shoulder a larger offensive load and maintain or increase their efficiency.

Jones' curve is especially intriguing. With an R^2 of 0.8834, his skill curve is by far the best match for the data. This season his Offensive Rating has peaked when his Usage Rate is somewhere between 24.0% and 26.5%. Jones was brought to Indiana because of his reputation as a defensive stopper. He scored at a career high rate last season, but mostly out of necessity. Jones fell out of favor with Jim O'Brien because he was middling jumpshooter. O'Brien didn't really give him a chance at the start of the season, which is shame, because he obviously put some work in on his jumper this summer. Jones is shooting 54.0% on 16-23ft. jumpshots this year and has made 40.0% of his three-pointers. He's taken a total of 52 long two-pointers and 25 three-pointers. This is a small sample but enough to indicate that he's improved significantly. Kudos, to Jones for identifying the part of his game which was keeping him off the floor and working to correct it. I do feel bad that he still didn't get the chance to prove he could make those shots until O'Brien was gone.

Thanks to Justin for the question. If you have a Pacers' related stats question or angle you'd like examined, send me an email at Levy2725@gmail.com