Numeric Narratives: Until You Use Me Up

Share All sharing options for: Numeric Narratives: Until You Use Me Up

Does Danny Granger have what it takes to carry an elite team? This question has been asked and opinions have been offered from just about everyone this season. The consensus seems to be that he's a very good player but would be better off playing next to an elite player. Incidentally, that's true for most situations. I'm a much more effective writer working alongside Tom, Nate and Rick. I'm pretty sure just about any player in the league could benefit from better teammates. The fact that it's true for Granger doesn't really answer the question.

My other sticking point is that this is really several questions wrapped up into one. Does he have the mental make-up and leadership qualities to carry a team? Can he lead by example? Does he command the respect of his teammates? Can he consistently utilize his all-around game to make a difference for the Pacers? Does he have the offensive ability to carry the team as a high-usage scorer?

This last question is the only one I can see answering in any quantitative way. To try and find an answer for this question we're going to look at Granger's skill curve. Skill curves were introduced by Dean Oliver, in his book, Basketball on Paper. They're a way of representing diminishing returns when it comes to the relationship between a player's Usage Rate and their Offensive Rating. Usage Rate is the percentage of a team's offensive possessions a player uses when they're on the floor. Offensive Rating is a measure of a player's offensive efficiency, how many points they create for their team per 100 possessions.

To introduce the idea behind skill curves, let's look at the Miami Heat. Of players playing at least 15 minutes per game, the most efficient offensive player on the Heat this season is James Jones, with an Offensive Rating of 126. That's significantly better than LeBron James' 115 or Dwyane Wade's 112. However, James is able to be this efficient because he uses just 12.4% of the Heat's possessions while he's on the floor. If he was asked to use more than 30% of their possessions, like LeBron and Wade, there's no way he could be as efficient. A skill curve graphs a player's Offensive Rating against their Usage Rate to try and identify what levels of usage they're most efficient at.

Oliver's method for creating skill curves is not revealed in his book, so what I've put together here is an approximation. I started with Granger's game log for this season and ordered it by his Usage Rate for each individual game. I then took a five-game rolling average of his Offensive Rating. I graphed that rolling average and fit a trendline to it. This method is far from exact and as it's my first attempt there could be some problems with my mathematical reasoning. Nevertheless, the graph below shows what I came up with. 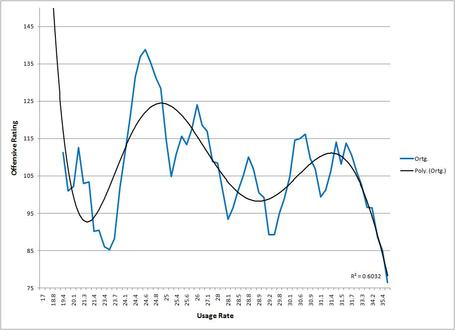 The skill curve shows that Granger's offensive efficiency has peaked this season when he uses somewhere between 24.0% and 26.0% of the Pacers' possessions. On the season he's averaging 26.6% of the team's possessions, just outside the peak, on the high end. To try and further connect this information to the actual product on the floor, I added the five-game rolling average for the team's Win% onto this graph. 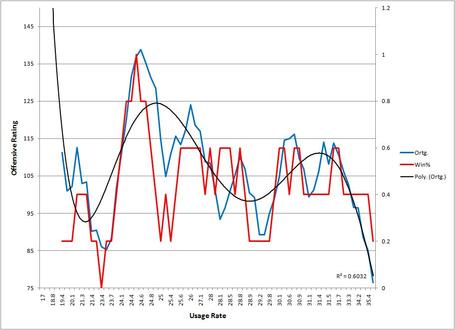 As you would expect for a team's best player and offensive focal point, the team's Win Percentage closely mirrors Granger's offensive efficiency. The Pacers' Win Percentage has spiked this year in games on the low side of his skill curve peak, where he uses somewhere between 23.5% and 25.0% of the possessions. The implication of this information is that the Pacers' might be better off offensively if he used a few less possessions, of course, that assumes someone else could use those possessions at least as efficiently. This is all just a complicated way of pointing out that the Pacers are much better when their offense is balanced.

This is not earthshattering news to anyone who follows the Pacers and I'm sure some of you are wondering why I needed 2 graphs and 500 words to arrive at that conclusion. My answer is that I like making graphs and I'm preparing for the day when SBNation agrees to pay me by the word. The real reason is that these graphs needed explanation and I think they can help us identify who should be taking a slightly larger share of the offensive load.

Using the same method, I created skill curves for Darren Collison, Paul George, Roy Hibbert and Tyler Hansbrough. This is the Pacers' starting lineup for the forseeable future, and thus the players Granger spends the most time on the court with. If Granger is going to reduce his usage, than one or more of those players will need to pick up the slack. For each player's skill curve I marked, with a red vertical line, their average Usage Rate for the season. 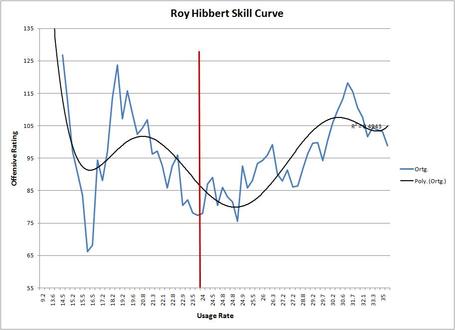 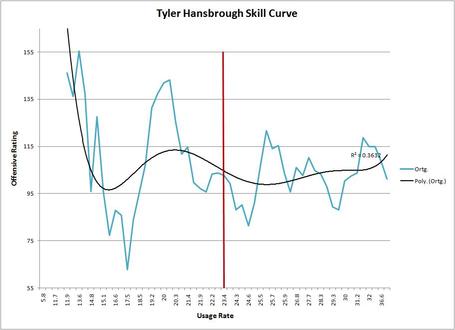 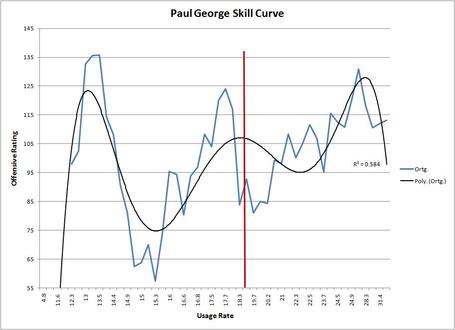 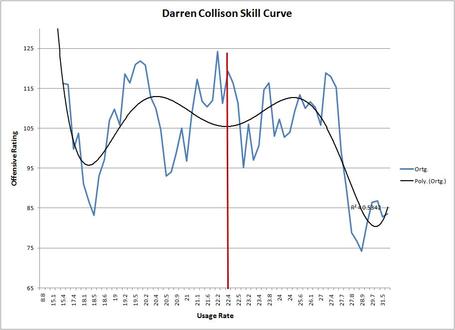 First off I'll point out that the R^2 values for these skill curves did not come out as high as Granger's, meaning they don't fit the data nearly as well. Some of the peaks on these graphs could also have fairly simple explanations. Hibbert has a peak when his Usage Rate gets above 30% because the team keeps feeding him the ball only when he has an obvious mismatch or has had a dominating game. I would guess that a bigger sample size would show him to be not nearly that effective at such a high Usage Rate on a consistent basis. Hansbrough's R^2 value was the lowest and is indicative of the changing role and opportunities he's had this season. While everyone else's production has fluctuated, they have at least played fairly steady minutes with a somewhat consistent offensive role.

The good news in looking at these curves is that Collison, Hibbert and Hansbrough all seem like they could increase their offensive efficiency with slight adjustments to their usage. The bad news is it seems like less possessions is probably the recipe for Hansbrough and Hibbert. My reading of Collison's skill curve is that he has some versatility in terms of where he can be efficient. However, his role hasn't been defined (or fulfilled) in a consistent way over the course of the season. It's left him stuck in the middle, balancing creating shots for himself with creating shots for his teammates. Giving one of those options a slight but consistent nightly emphasis could help him max out in terms of offensive efficiency.

The real exciting part of looking at these curves was seeing Paul George's. The data seems to indicate that he's the one player in this group with the ability to step forward as an efficient high-usage scorer. Obviously his curve is built from a small sample, and in games where he dominated offensively he did it in limited minutes against back-ups. Still, I think every Pacers' fan has had the sense, at some point this season, that he could be a really special offensive player. It was nice to find some numbers to support it.

This information may not have much practical application for the players. An open shot is an open shot, and should be take regardless of how many shots a player has already taken. However, it would be nice to see Granger pass up a few of his occasional contested jumpers. It would also be nice to see Paul George be more involved. The team has been setting up some isolations for him at the end of quarters. Other than that it seems like all of his shots are coming in found offense, transition, offensive rebounds and defensive breakdowns. Everyone is very excited about Hansbrough's recent performances, and rightly so. But it's much more likely that future Pacers' teams will be built with Paul George as the offensive focal point and Hansbrough playing a supporting role. Nothing the Pacers' have been doing in the last month is so impressive or overwhelming that they should be afraid to tinker.