Share All sharing options for: The Pacers' Power Forward Problem

Whenever the lockout ends, a brief and intense free agent signing period will inevitably follow. During that time the Pacers seem likely to pursue a power forward, endeavoring to upgrade what's often seen as the team's biggest hole. Fans were excited about the potential Josh McRoberts showed early, and thrilled with the development of Tyler Hansbrough late. Despite all the positive feelings, the season ended with a general sense that the young duo wasn't quite good enough.

Hansbrough and McRoberts saw the bulk of the power forward minutes, but they weren't the only contributors. According to 82games.com, the Pacers' minutes last season were distributed like this:

At first glance, no one is blown away by that rotation, but the numbers show they were actually very productive. 82games.com has statistics available for each team, listing their production by position. Just using the overall metric PER, the Pacers received more production at power forward than they did from any other position last season. The 17.9 PER posted by the Pacers' power forwards was significantly above average, and two points higher than the mark put up by the team's small forwards.

By these numbers, power forward was not the biggest hole for the Pacers' last season. But how did their rotation compare to the rest of the league?

I combined the power forward production statistics for each team into a single table. The statistics are all per 48 minutes. iFG% is the percentage of shot attempts which are taken inside the paint. 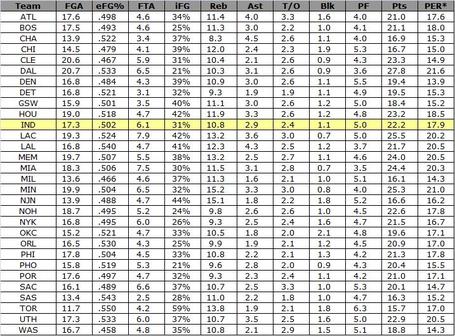 The Pacers' ranks by category come out like this:

In general, the Pacers fell in the middle of the pack. In examining all of these statistics I'm left with two questions. Is an upgrade at power forward really the biggest need for this team? Is a significant upgrade actually available through free agency?
I think the answer to the first question lies somewhere in the murky swamp of production vs. potential. In looking at the Pacers' roster many of us apply a heavy dash of potential when assigning value. The sentiment that Paul George is the Pacers' shooting guard of the future is prevalent. This rests on the assumption that some point in the future, hopefully soon, he will make a rapid ascent towards the ceiling of his potential. We hold the same hope for Roy Hibbert and Darren Collison. But the fact remains that all three offered disappointing production in a variety of areas last season. Power forward only appears as a weak spot on the roster when you project out five years in the future, using a hybrid of fantasy and reality to guess at each player's production. The ceilings of Hansbrough and McRoberts seem lower than that of George, Hibbert or Collison and that's why that hole seems so large. The fact is, in the near-past tense, power forward has been a position of relative strength, not weakness.
The one fact I'm omitting is that McRoberts is an unrestricted free agent, one who's resigning doesn't appear to be a huge priority. In the interests of full disclosure, I really, really hope I'm wrong about that.
Returning to the by-position stats, there are some clear positives. Although their production looked average in most categories, the Pacers did receive top ten production in FTA/48, Pts/48 and PER. A rough generalization of their weaknesses from that list (and having watched any random Pacers' game) would be that they struggle inside the paint, scoring, defending and rebounding.
With those weaknesses in mind, I find myself confused by the players most commonly mentioned as free agent targets for the Pacers, especially Carl Landry and David West. Neither is a strong rebounder. Neither is a tough post defender. Neither does much of their scoring damage in the post. In fact, both have a pick-and-pop heavy offensive game that is strongly reminiscent of Hansbrough's.
Just for fun, I took some of the free agent power forwards we've all heard mentioned as targets, and combined some of their statistics, leaving off names.
If you're like me, Players A and C don't look particularly enticing from a statistical standpoint. If so, say goodbye to Jeff Green and Carl Landry respectively. Player B provides plenty of rebounding and shot blocking, but not much else. I'll point out that this was a contract year for him, and his rebounding numbers this past season were significantly higher than in any of his previous five NBA seasons. If that and his limited offense are enough to scare you off, than you can say goodbye to Kris Humphries. Which leaves us with Players D and E. Player D is a little more efficient scoring, including at the rim. He also provides slightly more in the passing and shot blocking departments. Player E is David West. Player D is Josh McRoberts.
I'm sorry. I know including McRoberts was a dirty trick, and I definitely cherry-picked the stats. McRoberts is much more turnover-prone than West and provided his efficient scoring with a much lower Usage Rate. Those admissions notwithstanding, I'm still skeptical about West. Setting aside all the issues of age, injury and cost he doesn't seem to address the team's most glaring needs at this position. He is a capable scorer, but gets his buckets in very specific ways that don't seem like they would offer the Pacers the option to create a fundamentally different or more effective offense.
My frustration with the whole enterprise comes down to this - George, Hibbert, and Collison all appear to have high ceilings so the team is willing to wait and be patient with them, allowing them to progress organically, hopefully to help them reach their high potential. Why can't we take the same route with Hansbrough and McRoberts? Admittedly they have distinct limitations, but they are already as productive as roughly half the power forward combos in the league. Why would the team choose to spend their precious dollars on someone who doesn't provide a significant upgrade at a position of relative strength, when other holes remain unfilled?