What Does George Hill Bring To The Pacers' Offense?

Share All sharing options for: What Does George Hill Bring To The Pacers' Offense?

The Pacers' splashiest, and only (thank you very much lockout) roster move this summer was adding George Hill in a draft night trade with the San Antonio Spurs. Acquiring an established, successful and still young player was a solid move; not to mention the P.R. bonus of his local roots. Hill stirred up even more excitement when he went ahead and scored 50 points in a Pro-Am game this summer. Not to be a buzzkill, but I mean to cut through some of the excitement and establish some realistic expectations for his performance. We'll approach what those might look like from a few different angles, but today we'll start with what role he might play in the Pacers' offense.

Last season the Pacers' offense struggled, becoming progressively more stagnant as the year went on; reaching the point of being almost unwatchable in the playoffs against the Bulls. The roster was filled with some efficient complementary scorers and Danny Granger; a very potent scorer, but one who doesn't excel at creating his own opportunities. The Pacers had offensive weapons but lacked a dynamic individual creator, or a consistently effective manner of attack, to bind the whole system together. Although it hasn't been said explicitly by anyone in the organization, I get the feeling there is some hope that George Hill can provide some help in the dynamic individual creation department. Is he really up to this task?

The first thing to look at is Creation Ratio, a statistic SBNation's own Tom Ziller introduced a few weeks ago. Creation Ratio compares the shots a player creates, either through an unassisted shot or an assist to a teammate, with the number of shots they take which are created for them. You can find a full description of the formula in Ziller's original piece. For example, Steve Nash has a very high Creation Ratio. Spot-up shooters like James Jones would have a very low one. A Creation Ratio of 1.0 would mean the portion of a player's offensive contributions which were created on their own is equal to the portion of their offense which was created for them by their teammates. Hill's Creation Ratio for last season was 1.48. To add a little more context, it ranked 35th of among the 40 point guards who played the most minutes last season. Of those 40 points guard, the one with the most similar Creation Ratio was Daniel Gibson, a guy not known for his ability to break down a defense. Now obviously, some of this is a reflection of the role Hill was asked to play in San Antonio. Roughly half of his minutes came alongside Tony Parker, making him a de-facto shooting guard. However, we'll return to that issue in a minute. 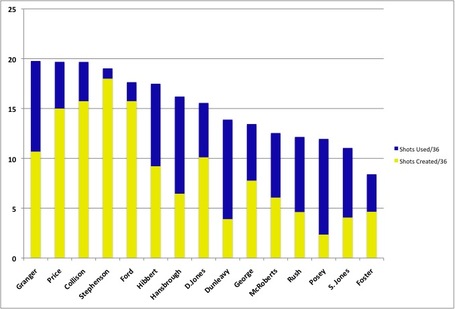 Four Pacers, A.J. Price, Darren Collison, Lance Stephenson, and T.J. Ford were responsible for most of the Pacers' shot creation on a per minute basis. Of those four, only Collison was among the top thirty players in the league in Ast%, or the percentage of teammates' baskets he assisted on. This means Price, Stephenson and Ford were creating a lot of shots for themselves. All three had a TS% below 46.0% which means the Pacers would probably have been a lot better offensively if that trio hadn't been quite so creative.

So how would Hill's numbers have fit in? Below is the same graph as before, but with him included. 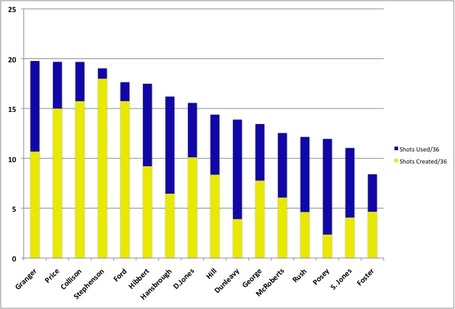 If you couldn't find Hill, he's sandwiched between Dahntay Jones and Mike Dunleavy. That means his offensive contributions were not numerous, even on a per-minute basis. In terms of the division between creating offense and allowing it to be created for him, the Pacers that Hill most closely resembled were Roy Hibbert and Paul George, two players who are very much part of a supporting cast on offense. The good news is that even in that supporting role offensively, Hill was very effective. His TS% of 58.8% last season would have been third on the team behind Dunleavy and Josh McRoberts - 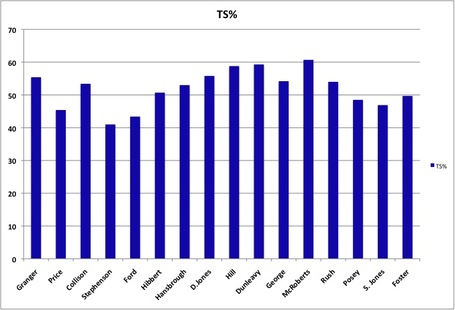 The bad news is that in his time in San Antonio, Hill never showed that dynamic creation ability on a large scale. Again, the system and role he was asked to play certainly limited his opportunities to demonstrate that ability. Still, when those opportunities presented themselves, he didn't do much to stand out.

The question will ultimately remain unanswered until, or if, the regular season begins, but there isn't a lot of evidence to suggest Hill is the cog to push the Pacers' offense to another level. Perhaps he simply hasn't had the chance. Perhaps it's outside his abilities. I want to be clear that either way, his addition to the roster is a huge positive. Even if he just gives the Pacers a rough approximation of what he provided the Spurs, it will be a huge upgrade to the backcourt depth. He may not start, but Hill will be one of the five best players on the team even if his production doesn't jump at all. We all may hope that he can be more than what he's shown so far in his career, but should be happy to have him even if he doesn't.