Clutch Scoring For The Pacers

Share All sharing options for: Clutch Scoring For The Pacers

A few weeks ago we started to look at what George Hill might be able to bring to the Pacers offense. This discussion specifically focused on his ability to provide dynamic shot-creation, a skill that was definitely lacking on last year's roster. Hill was a potent individual scorer in college but, despite looking at the numbers in several ways, we couldn't find much evidence of him demonstrating that skill in the NBA. In the end we were left wondering if the offensive system and his role in San Antonio held him back in this area, or if he was better suited as a complimentary offensive player against this level of competition.

In addition to the multiple scoring barrages he has unleashed in summer exhibitions, I did find some numbers that suggest Hill could provide some individual scoring punch. The numbers I found specifically deal with clutch scoring, another area that was not a strength for the Pacers.

What we're going to look at is something I put together for Hickory-High, an extension of an idea first presented at Basketball-Prospectus with college players. I call my version the Clutch Creation Gauge. It's a graphic representation of a player's relative ability to create their own shot in clutch situations and to do it efficiently. All the numbers come from 82games.com, and use their definition of a clutch situation - less than five minutes in the game, or overtime, neither team ahead by more than five points.

The Clutch Creation Gauge graphs a player's TS% on the y-axis and their Ast'd% (percentage of their shots which were assisted on) on the x-axis. The graph is divided into 4 quadrants:

Ideally, a team would have a mix of players in Quadrants A and B - all high efficiency, with some players who can create on their own and other players who can finish opportunities created by their teammates. The worst case scenario is a mix of players in Quadrants C and D. Here you have some players forcing shots, or creating low-percentage looks for their teammates and no one is making much of anything. Here's what the Pacers' breakdown looks like for the players who saw enough clutch minutes to qualify for the database at 82games. 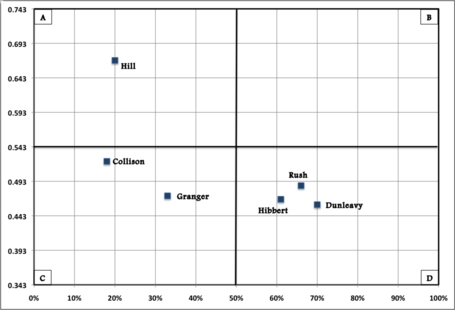 Funny enough, the Pacers look a lot like that worst-case scenario I just described. Darren Collison and Danny Granger are creating lots of shots themselves, and nobody is scoring efficiently. There are two bright spots. One is Hill, who last season in San Antonio created shots a high percentage of his clutch shots himself and did so very efficiently. The other bright spot is Josh McRoberts, who isn't actually plotted on the graph, at least not in the part we can see. McRoberts had an Ast'd% of 50% in clutch situations last season with a TS% of 91.6%. This puts him right between Quadrants A and B, with an efficiency level that's quite literally off the chart. I haven't heard any mention of re-signing McRoberts as a priority, which is a shame because, despite some mistakes, he was very effective for the Pacers last season.

These numbers do represent a very small sample, but still offer information about offensive changes which seem imperative. I'm of the mind that Granger doesn't really belong in Quadrants A or C. In my mind his offensive talents are better suited in a complimentary role. He doesn't need to have every shot created for him, but his efficiency should be able to rise the closer he moves to that 50% mark in Ast'd%. The other thing that's amazing is how poorly Mike Dunleavy and Brandon Rush shot in clutch situations. I don't think this is indicative of their ability, both are efficient shooters, as much as of the team's inability to create good shots of any kind in clutch situations. The numbers also show that Hill has the potential to mitigate some problems on both sides of the graph, breaking out of the role he played in San Antonio, and providing the Pacers with another tool to make things happen on offense. I'm keeping my fingers crossed that there are some actual NBA games where we can watch how this plays out.