Share All sharing options for: 1/3/11 - Pacers' Stat of the Week: Shot Selection

Welcome to the first Stat of the Week installment of the new year. This feature, posted each Monday, focuses in on one statistic or number to recap and tell the story of the Pacers' performance for the previous week.

With no post last week because of the holidays, we've had two weeks of continued struggles to agonize over. The Pacers finished the month of December with a 5-10 record;Mike Dunleavy's last second tip-in against New Orleans giving them their only win against a likely playoff team. The team's Offensive Rating has fallen to 99.3, good for 24th in the league. In addition to struggles with production, the confidence and swagger the Pacers started the season with appears to have vanished completely.

As the losses have mounted the team's defense has remained respectable, bringing their offensive woes to the forefront of most fans' minds. Today I want to revisit the idea of shot selection. What are the high percentage shots for the Pacers? How often are they getting those high percentage shots?

This first table shows the shooting percentage for each of the Pacers' players from each area of the floor. For three pointers I have used eFG%instead of simple FG%, to incorporate the value of the extra point scored on a three pointer. The cells in the table are color coded on a scale from red to blue. The red boxes are the highest percentage shots, the blue cells the lowest. Everything in between 100% and 0% is shaded accordingly. 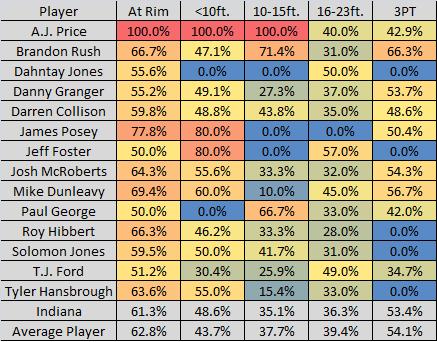 This second table is shaded in the same way but shows the total number of field goal attempts for each player from each area. Ideally the areas which are shades of red and orange on the table above will also be shades of red and orange on this table indicating that the majority of the team's field goal attempts are coming from high percentage areas of the floor. I used total attempts instead of attempts per game or per 40 minutes because Jim O'Brien has been doing some shuffling with his rotation and this might help us to see some players who are being under-utilized. 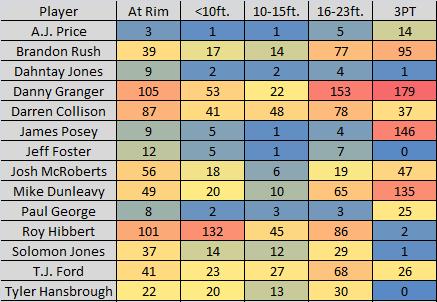 Obviously the distribution we have here is less than ideal. In looking at the team level we are seeing a huge reliance on long jumpshots. A quick look at the first table shows us that this has been the least efficient scoring area for almost every Pacer.

In particular Roy Hibbert's shot distribution istroubling. He is shooting just 28% on shots from 16-23ft. but has attempted 86 of them already this season. That's nearly 3 a game and gives him more attempts from that area on the season than Brandon Rush, Darren Collison, Mike Dunleavy, or T.J. Ford. I understand the value of adding that shot to his offensive repertoire, and how that can help the team's offensive sets when he works out of the high post, but he simply can't make it consistently right now. Every time Hibbert takes that shot, it's a victory for the opponent's defense, make or miss.

A lot of vitriol has been directed towards Jim O'Brien for the team's offensive problems, but in this specific instance I believe the fault lies with Danny Granger. He has been an offensive ball-stopper this season like never before. A career low 54.0% of his made baskets have been assisted on this season including just 39.3% on long two pointers and 89.1% (a career low) on three pointers. Too often he is catching the ball on the wing, sizing up the defender and rising up for a contested jumpshot without challenging the defense to move at all. I counted at least 4 of these shots last night against the Knicks, and I guarantee Mike D'Antoni was happy to see Danny take that shot each time.

As far as players who might be under-utilized I think you can make the argument, as many have, that Tyler Hansbrough and A.J. Price deserve to be seeing more time. Price has played very limited minutes this season but has been extremely effective offensively when he's on the floor. Hansbrough's mid-range game still needs a lot of work but he has been very good around the basket and his ability to draw fouls is always a plus. Both have other shortcomings with regards to defense and ball-handling, but if Jim O'Brien is looking to give the offense a boost, finding minutes for Price and Hansbrough seems more likely to generate results than squeezing Paul George into the already crowded wing rotation.

The Pacers don't play again until the Spurs come to town on Friday, so there is plenty of time for O'Brien to push the team in practice and try to settle on some sets and rotations to address the offensive issues. The players could go a long way towards helping him out by understanding what areas of the floor they shoot well from and sticking to those shots.

Statistical Query of the Week: This is the second Statistical Query segment we're adding to the weekly stats piece. A few weeks ago The Drunkin' Dutchman asked a question in the comments to another piece about which player has been most effective at power forward for the Pacers. This question seems expecially relevant given the team's unsettled rotation and the problems James Posey had guarding Amare Stoudemire down the stretch last night.

The Pacers have essentially had 5 players spend minutes at power forward this season, Josh McRoberts, Tyler Hansbrough, James Posey, Danny Granger and Jeff Foster. I decided to look into effectiveness in two different ways. The first is to look at their individual production. 82games tracks some individual player stats by position. To simplify we'll just look at PER, an overall player metric. The table below shows the PER for each player when they are at power forward and the PER their counterpart on the opposing teams posts while they are at power forward. Keep in mind that a PER of 15.0 is considered average.

By this metric Jeff Foster looks great, although he hass played limited minutes at power forward and there are certain matchups that will definitely be less favorable to him. Josh McRoberts was the second most productive player for the Pacers but he also gives up quite a bit to the opponents. James Posey, surprisingly, looks fairly good by these numbers, while Danny Granger obviously sacrifices quite a bit of his own production when playing power forward.

The second way I tried to answer this question was by looking at how the team performs with each of these players at power forward. The table below shows the minutes and Offensive and Defensive Ratings for the Pacers when each player is in at that position.

I think these numbers look more like what we expected. James Posey has played the second most minutes at power forward but the team has really struggled in those minutes. Posey at power forward is the only situation of these five in which the Pacers have posted a negative point differential. The teams appears to be at it's best offensively with either Hansbrough or McRoberts, defensively with Granger or Foster on the floor.

The greatest positive point differential is with Granger at power forward, and these numbers actually look very similar to what we saw last season with Granger at power forward. However, he has been vocal about preferring to play small forward and his individual production does fall off. I would think it's unlikely that the team will look at that as a long-tem solution.

Combining these two ways of looking at the issue it seems apparent that James Posey should not be included in the power forward rotation. Foster has been very effective but I don't know that those numbers would hold up with a larger sample size. None of the options are overwhelmingly appealing but in my humble opinion the best solution would be to have most of the minutes going to McRoberts and Hansbrough with Granger and Foster sliding over depending on the opponent, matchup and situation.

If you have a Pacers' related statistical idea you'd like me to look into, send me an email at Levy2725@gmail.com and include Indycornrows somewhere in the subject line.

In the first installment of Stat of the Week we discussed Rebound Percentage and identified it as a season long focus and bellwether statistic for the team. The team's percentages 32 games into the season look like this: