What Can The Pacers Expect From James Posey?

Share All sharing options for: What Can The Pacers Expect From James Posey?

The recent legal and disciplinary troubles of Lance Stephenson and Brandon Rush have left the Pacers' shooting guard rotation even more unsettled than ever.

With minutes available at shooting guard and a clear cut starter yet to emerge, I wanted to take a look at James Posey, the forgotten piece of the Collison/Murphy trade. Although more forward than shooting guard, Posey has filled minutes there in the past.

Two seasons ago Posey left Boston with a championship ring and a reputation as an excellent defender, spot-up shooter and the type of experienced, veteran glue-guy every good team needs. Things went disastrously wrong in New Orleans. Chris Paul and Tyson Chandler were injured, the team fell off a cliff and Posey's play took a nosedive.

His reputation has taken a hit, but can he still make the contributions he made in Boston? Or have his physical abilities waned so much that he has become completely ineffective? Let's take a look at some of his numbers from last season and see what he might be able to contribute to the Pacers next season.

To begin, here are some Posey's basic numbers from last season:

Posey put these numbers up playing 22.5 Minutes per game, over 77 games. There is not much to be impressed with here, other than his rebounding numbers, which we'll come back to in a minute. His FG% dropped significantly last season, but with a career FG% of only 41.3% there's not much hope that it was a fluke.

The numbers can only tell us so much, and I have to admit that I only saw Posey play a handful of games with the Hornets. Looking for an expert opinion, I asked Ryan Schwan of the TrueHoop Network blog, Hornets 24/7, for some observations on Posey's time in New Orleans. Here's what Schwan had to say:

The good:  James Posey is a tenacious rebounder.  He can't jump, but he boxes out and gets dirty when going for the boards.  He's not going to get spectacular results, but he'll get more than his share.(this contributes greatly to his solid WP48)  He's also skilled at drawing charges, particularly in the half court.  As a defender of most power forwards, he'll do a decent job.  He also sets nice screens on the pick and pop.  He can be tough almost to the point of dirty.  When he fouls, he really fouls - and will draw flagrants doing it at times.

The bad:  Posey is SLOW and can't guard wing players at all any more.(SF or SG)  He'll chase them gamely through screens, and use his experience to anticipate where a player is going, but he simpycan't keep up withthem.  He also will be good for at least two fouls a game where he has to hack the crap out of a player because he was isolated on them and didn't have a prayer of staying with them.

Schwan's comments on Posey's rebounding ability are reflected in his rebounding percentages. In trading Murphy, the Pacers have lost their best defensive rebounder, and one of the best in the league. Posey should be able to help mitigate some of this loss. Posey's 20.5% DRB% was 7th best in the league last year among players between 6'5" and 6'8". For players of that height range, only Reggie Evans, DeJuan Blair, Udonis Haslem, Gerald Wallace, Chuck Hayes and Terrence Williams were better. Of those, only Wallace and Williams can really be considered wing players, with the others playing primarily in the post.

Schwan also implies that Posey can still provide toughness and attitude, qualities that seemed to be sorely lacking on last year's roster. He's also of the opinion that Posey has lost some speed and may struggle defending on the perimeter. To hone in on that idea, let's take a look at Posey's individual defensive possession numbers from Synergy Sports: 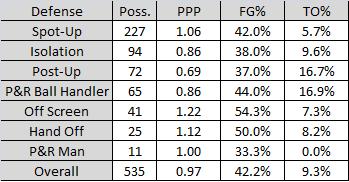 The numbers here are completely consistent with the idea of Posey losing a step on the perimeter. He did reasonably well defending in isolation, but committed a shooting foul on an extremely high 11.7% of those possessions. He struggled defending the pick and roll and was positively awful chasing shooters off screens.

The one bright spot was his post defense. A goal for this off-season was to add an athletic and defensive minded power forward to pair with Roy Hibbert. While Posey's athleticism has declined he still appears to have potential as an effective post defender. Having him available to cover athletic, mobile power forwards of the Chris Bosh variety could be a real asset to the Pacers.

While there's some hope for contributions on the defensive end, Posey's offensive numbers create nothing but despair.

He was positively atrocious across the board last season. He struggled as a spot-up shooter and was mediocre in transition, the two areas the Pacers would hope he could contribute in next season. Even with a modest improvement it's difficult to imagine Posey being able to offer much of anything in terms of scoring. If one had to find a bright spot it would be that he's capable of moving the ball to an open man, and his turnover rate is respectable.

Moving into next season it seems apparent that Posey is not going to help much at the shooting guard position. Always a tweener, he seems more of a 3/4 than a 2/3 at this point in his career. I am certainly glad to have Posey on the team, and even if he doesn't play at all his veteran presence should be a boon to the young team around him. The problem is that he doesn't appear to be any sort of answer to the shooting guard question.

Depending on what they get from Brandon Rush after his suspension, it seems very likely that the Pacers will have a diverse wing rotation on the bench, with each player option filling a very specific role:

On the surface it's nice to look at that lineup and see such versatility in skills. The problem is that those skills are separated among five different players. Jones can really help out defending but takes away minutes from a more potent offensive option. Dunleavy is almost a polar opposite, effective on offense but vulnerable on defense. Posey can help with rebounding and bigger defensive assignments, but having him out there takes a shooter off the floor. George and Stephenson appear to have the most potential as all-around players but this may be because they're rookies and we haven't seen them play against NBA competition. As they spend time on the court it could become apparent that they have huge holes in their games at this point in their careers, which will put them in the same category as the other singularly skilled wings on the team for this season.

The best-case scenario would be the emergence of either Brandon Rush or one of the rookies as a legitimate and complete NBA shooting guard. That may be unlikely, but it doesn't seem unreasonable to think that with Granger, Hibbert and Collison out there Jim O'Brien can juggle the tools he has at shooting guard and keep the Pacers in the hunt for a playoff spot.