This afternoon the Pacers pulled off a long anticipated trade to address their point guard woes. The deal, as reported so far, sends Trevor Ariza to the Hornets, Courtney Lee to the Rockets, Troy Murphy to the Nets and James Posey and Darren Collison to the Pacers. This may not be the end of the Pacers' roster moves, as rumors have been circulating about a possible buyout with T.J. Ford as well as a buyout or trade involving James Posey.

Regardless of any follow-up moves the real prize here for the Pacers is Darren Collison. Collison, a rookie last season, was extremely impressive filling in for the injured Chris Paul. Tim Donahue at EightPointsNineSeconds shared a short scouting report on Collison written by Ryan Schwan of Hornets 247. I wanted to dig a little bit deeper, looking at some of Collison's numbers from last season as well as some of his collegiate scouting reports.

To begin with let's look at some of Collison's traditional statistics from last season. For comparison I have included the statistics of the three players who played point guard for the Pacers last season: Earl Watson, T.J. Ford, and A.J. Price.

Collison is a clear upgrade as a scorer/shooter. In addition he averaged more assists and posted a higher Pure Point Rating than the others. It would be nice to see him decrease his turnovers next season, and perhaps provide a little more rebounding from the point guard position. 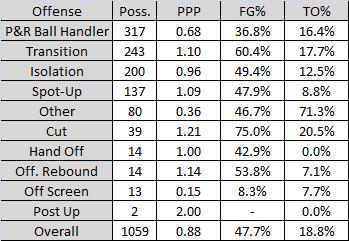 Offensively, Collison's strengths are clear. He's a respectable spot-up shooter, which will be a new addition for the Pacers at point guard. In addition his speed and quickness make him dangerous in transition and isolation. Last season in New Orleans Collison had limited opportunities to work off the ball. He was very effective off cuts and hand offs, plays which he should see more of in Indiana's offense.

The one troubling area here is his lack of effectiveness in the pick and roll. Although this is not a large part of the Pacer's offense, it would be nice to see some improvement in this area next season. Watching video of these possessions on Synergy, Collison seems to suffer from a lack of patience, often making his move before the screener is completely set. It's difficult to project much change next season, as none of the Pacers' front court players, other than Jeff Foster, can be considered accomplished or experienced setting screens.

In addition Collison's problems with turnovers are obvious across possession type. Hopefully, a year of experience and the confidence his success in New Orleans built will allow Collison to play a more calm and under control offensive game next season.

One other Offensive statistic I'd like to bring in is his shot selection. Below is a break down of Collison's shot attempts from last season. For each area of the floor you can see the percentage of his Field Goal Attempts which came from that area, and the percentage he shot from that area.

A few real positives jump out looking at these numbers. First of all, Collison is an excellent finisher at the rim and shoots a significant portion of his shots there. In addition, he is respectable on long jumpers. Finally, he is a capable 3PT shooter, but doesn't appear to force a lot of attempts from there.

The Pacers are desperate for players who can get to the rim on offense. It will also be nice to have an efficient 3PT shooter at point guard who waits until he is open to pull the trigger. 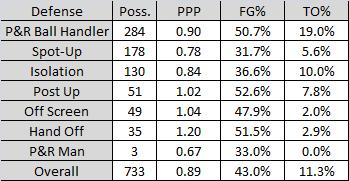 Schwan's scouting report on Collison was fairly negative when it came to evaluating his defense.

His defense is abysmal.  He’s fast, and he gets some steals while staying in front of his man, but he can be outmuscled easily, shot over, and it’s not hard to rub him off with a solid screen.

Looking at his Synergy numbers there are some areas to feel good about. Collison produces a high rate of turnovers against the pick and roll. He obviously competes hard on the defensive end, doing a respectable job in isolation and closing out on spot-up shooters.

Collison's physical profile will always limit him at the defensive end. His quickness and speed are assets, but his slim frame and lack of strength will be exploited by efficient teams.

The quote below is from a Draftexpress.com analysis of last year's point guard draft class.

Collison ranked third in overall FG% at 50% and his PPP of 1.02 lands him well above average. The second best finisher in our group at 1.26 PPP and very capable shooting off the dribble (.99 PPP), Collison can score in one-on-one situations (1.02 PPP) and utilize the pick and roll (1.14 PPP) to get his shot off. Able to score at a high rate when he puts the ball on the floor, Collison could still stand to improve his catch and shoot ability, but could be a great backup point guard in the NBA since he doesn’t seem to force anything and his offensive tools are conducive to success in most situations. The question now is whether he can translate that to a higher level of competition.

The most promising thing about Collison from my perspective is the last line in that quote. After only one season in the NBA it is Collison has largely been able to translate his strengths at the college level to the NBA. He has continued to be an efficient shooter, an above average finisher and a capable penetrator. His success with the pick and roll in college leads one to believe that he could improve on last season's numbers.

Regardless of the various opportunities he has for improvement, Pacer fans should be extremely excited about the addition of Collison. He is young, blindingly fast, athletic and efficient in many areas. With only one season under his belt it's reasonable to expect improvement as well. Collison adds a dynamic talent to the Pacer's backcourt, at an extremely reasonable price. He will likely be handed the starting job, and I for one am extremely excited to see how he can help the team next season.