Have The Pacers Already Found The Answer To Their Point Guard Conundrum?

Share All sharing options for: Have The Pacers Already Found The Answer To Their Point Guard Conundrum?

The Pacers' stated goal this off-season was an upgrade at the point guard position. Having lost their end-of-the-season starter to free agency for the second summer in a row, although Earl Watson hasn't officially signed somewhere else, the Pacers are left with the as yet underwhelming T.J. Ford and second year pro A.J. Price, who is currently rehabbing a knee injury. The Lance Stephenson summer league experiment notwithstanding, the Pacers haven't done anything as yet to accomplish an upgrade in this area.

Many of the notable free agent point guards have been signed, but rumors have begun circulating about the availability of Ramon Sessions. This idea seems to have been greeted with much support from fans. I apologize for the misleading photo and title, but this is not a post about Ramon Sessions. I have a different solution to offer.

What if I told you the Pacers could enter next season with a starting point guard who is under 28 years old, and a former Top 10 Draft Pick? What if I told you that player had been on playoff teams in 4 of their 6 NBA seasons and had career per game averages of 12.1 Points, 6.2 Assists, 3.3 Rebounds and 1.2 Steals? What if I told you that the Pacers could get this player on 1 yr. deal and cut him loose at the end of the season if things didn't work out? This won't be a surprise to many of you, but the player I am talking about is T.J. Ford, and he's already a Pacer.

In his two seasons in Indiana, Ford has admittedly been a disappointment. I am here to argue that in our frustration and disappointment we have lost sight of the player he is, and the potential he has to be an asset on the floor this season.

Let's start by addressing the rumors concerning the Pacers' interest in Ramon Sessions. Below is a comparison of each player's per 36 minute statistics from last season.

The numbers are remarkably similar, with a slight edge to T.J. Ford. Both players had disappointing seasons last year and did not receive the playing time they expected. To be sure we are looking at such similar players, let's look at the career numbers. (I couldn't find Pure Point Ratings for each player's career.)

Again, the numbers appear extremely similar with a slight edge to Ford. Sessions is under contract for the next 3 seasons (2012-2013 is a Player Option) for a total of $12,773,919. Ford's contract is worth $8,500,000, but expires at the end of this season. Offering such similar statistical production would make Sessions a better value, but Ford offers more flexibility and the ability to pursue a more attractive long-term point guard option next off-season.

In looking at Ford, I would like to focus on 3 areas: 1) Talent and Potential 2) Disappointments with the Pacers 3) Maximizing his skills in 2010-2011

Ford's very respectable career numbers can be found above in the comparison with Ramon Sessions. In addition, I pulled together a few of his other career highlights:

A WP48 of 0.100 is considered average. So by this measure, Ford was above average with regards to Wins Produced in each season except for this last one.

The Pacers have not lived up to expectations since Ford joined the team, but in his previous 4 seasons his teams had a Winning Percentage of .534 and made the playoffs each time.

Ford is clearly not an All-Star point guard, and is not a player who can single-handedly push a team over the top. He is, however, an above average ball handler and distributor. He has experience running an offense and playing in big games. He is a good penetrator, excellent in transition, and has very good speed and quickness. In addition Ford is only 27 years old, and is not necessarily done developing as a player.

I fully recognize that highlight reels have no relevance to discussions of a player's weaknesses, but let's remind ourselves what T.J. Ford can do when he is playing at his best.

T.J. Ford: Disappointment with the Pacers

When Ford joined the team two summers ago, the Pacers' front office thought they had killed two birds with one stone: shedding Jermaine O'Neal's bloated contract and acquiring a starting point guard. Over the past two seasons Ford has struggled with his shooting and turnovers, losing his starting to job to Jarret Jack and Earl Watson. Things were particularly bad last year when he was benched for large portions of the season, appearing in only 47 games.

While Ford's individual numbers have declined in his two seasons in Indiana, you can see from the Ramon Sessions comparison above that they were respectable. So how did he end up at the end of the bench each of the last two seasons? Below are the Pacers' Offensive and Defensive Ratings for the last two seasons broken down by which player was playing the Point Guard position. In addition, I included the ratings for the Pacers' season as a whole and the league average. 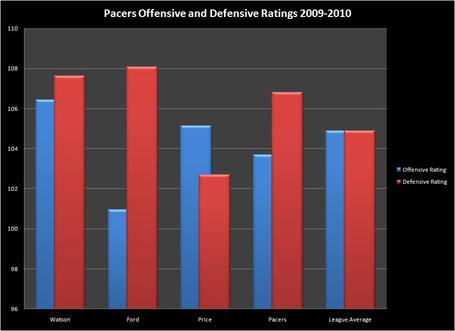 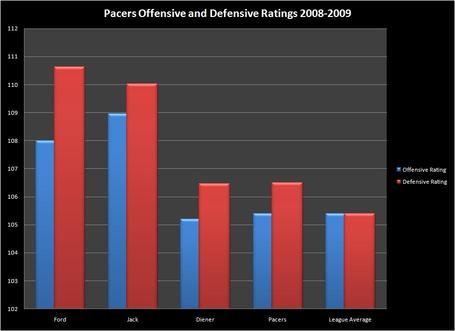 The common refrain from fans and analysts is that Ford is the wrong player for Jim O'Brien's offense. He doesn't shoot the ball well and is not as effective without the ball in his hands. My issue with this explanation is Earl Watson. The Pacers were much more effective withWatson at point guard last year. Watson is also a sub 30% 3PT shooter and who doesn't play well off the ball. Ford actually shot the ball for a better percentage last season, and they turned the ball over at an identical rate. Watson's supposed strength was defense but the team was nearly as bad defensively with Watson on the floor as Ford. Ford was the starter at the beginning of the season when the team struggled. Watson was the starter at the end of the season when the team went on a successful run. If their statistical production was similar can we really attribute the team's improved play to Watson's individual production? Is it possible that Watson was the simply the beneficiary of a team gelling around him, and teammates returning from injuries and hitting their stride late in the season?

In a post, from a few weeks ago, at Hickory High, I compared the production of each of the Pacers to the league average for their position. The areas where Ford's production was extremely below average were scoring efficiency. His usage rate has declined each of the past 3 seasons which explains some of the decrease in individual production. C

learly the current Pacers' offensive system doesn't maximize Ford's skills or allow him to use those skills to make his teammates better. The coaching staff hasn't seemed to make adjustments for Ford's abilities, and he hasn't made noticeable progress in improving any of his weaknesses. But this doesn't mean things can't change for this upcoming season. 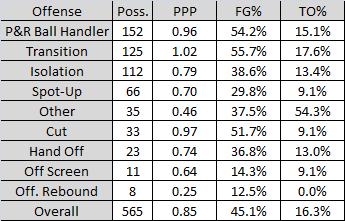 Looking at these numbers there are some clear positives and negatives. Turnovers were a problem across the board, and he struggled mightily hitting the spot-up jumpshot. On the other hand Ford was very effective handling the ball in the pick and roll, and pushing the in transition. I was surprised to see his numbers on isolation possessions be so low. I watched some video of these possessions on Synergy and saw roughly two-thirds of them end with Ford pulling up for a jumpshot. This led me to look at his shot selection for the past few seasons.

Despite any lingering frustrations from fans, the Pacers' coaching staff is stocked with professionals. If the Pacers are going to have a successful season with Ford at the helm, it's incumbent on both the coaches and Ford to make changes. Cutting down on turnovers and attacking the rim need to be focal points for Ford. The coaching staff can emphasize this point in practice and through their playcalling. Ford has demonstrated that he isn't capable of consistently making spot-up three pointers. It should be the job of the coaching staff to keep him out of situations where he is forced or encouraged to take those shots. The Pacers should continue to run, a good situation for Ford. In the half-court, focus on keeping him involved in the pick and roll. If they want to run half-court possessions through Roy Hibbert, then make sure Ford is cutting to the basket or moving to open space, not camping out behind the three point line.

Ford needs to be making a conscious effort to attack the rim at every opportunity. The Pacers have suffered from a severely negative free throw differential the past few seasons. Ford has the potential to help out in this area. His career high for FTA/36 was 4.7, put up in his first season in Toronto. A serious effort should be made to push this number above 5.0 this season.

There doesn't seem to be as much room for improvement but for the sake of being thorough, let's look at his defensive possessions as well. 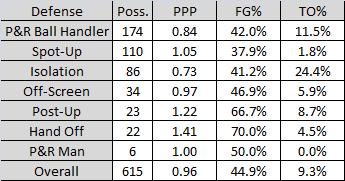 T.J. Ford has a distinct ceiling at the defensive end. His lack of height and strength will always be exploited by smart teams, either by putting him in the post, shooting over the top of him ,or working him off screens. That being said he is clearly an effective on ball defender, sporting a ridiculous 24.4 TO% on isolation plays. Hopefully, improved team defense next season will help compensate for some of his individual defensive weaknesses.

Ford has a unique skill set, unmatched by any player on the current roster. Both he and the team haven't made the necessary adjustments to maximize his skills, but that doesn't mean it can't happen this season.

As the available free agent point guard field has continued to shrink. There has been much frustration from fans at the team's lack of action. Below is a short list of point guards who have been signed to new contracts this summer.

There's not a player on that list with as much potential to be a top flight point guard as T.J. Ford. I might be in the minority, but I would much rather give Ford one more season to turn things around then tie the future of the team to any of those players as a long term solution.

Despite past failures, T.J. Ford will likely be handed the Pacers' starting point guard position for the third year in a row. There is no room for excuses, with his major competition coming from Lance Stephenson, a rookie and natural shooting guard, and a second-year pro, A.J. Price, returning from a serious knee injury.

If Ford plays well, the Pacers could chase a playoff seed in the East, if he struggles they can chase a high draft pick. I don't accept the simple explanation that he is the wrong player in the wrong system. He's too talented a player. T.J. you still have at least one fan in Indiana! Let's go get that 8th seed!