How Can Danny Granger's Positional Versatility Help The Pacers?

Share All sharing options for: How Can Danny Granger's Positional Versatility Help The Pacers?

My post yesterday about finding some ways for Troy Murphy and Roy Hibbert to work better together raised some discussion in the comments. The sticking point for many readers was my suggestion that the Pacers consider making Danny Granger their starting Power Forward and have Murphy work off the bench as the back-up Center.

I presented some statistics indicating that the Pacers were much more effective last season when Granger played Power Forward. Those positive influences were made even stronger when Granger was paired with Hibbert and Brandon Rush.

In support of this idea I compared the Pacers' Offensive/Defensive Ratings and Offensive/Defensive Rebound Rates with Granger at Power Forward to those of the Pacers as a whole. A reader wondered in particular if I could put together a comparison of those stats for when Granger played Power Forward and when he played Small Forward. I also was able to gather some of his individual statistics for each position. Finally, a reader wanted to know who was most often playing at the Center position when Granger was at Power Forward.

Statistics, graphs and analysis after the jump . . . 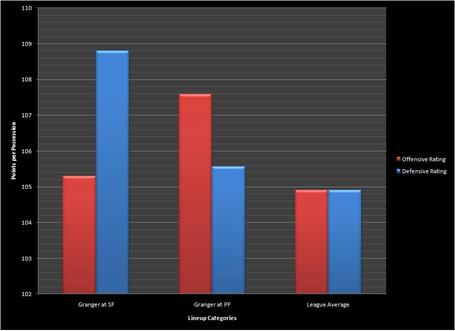 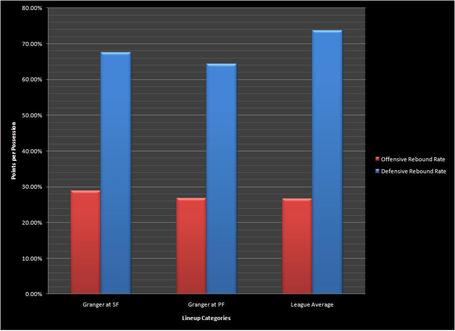 I would have really liked to look at these same numbers for the 2007-2008 and 2008-2009 seasons, but BasketballValue.com, where I took these stats from, didn't assign positions in their five man unit statistics until this season.

The final issue I wanted to look at today was the minute distribution at Center while Granger was playing Power Forward. 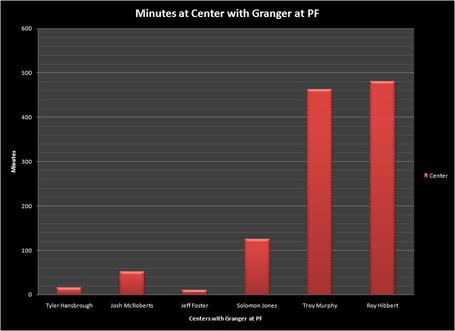 Hibbert and Murphy split the bulk of the minutes fairly evenly, while the rest of the minutes went to Solomon Jones, Jeff Foster, Josh McRoberts and Tyler Hansbrough.

To summarize, there are obviously some advantages and disadvantages to playing Granger at Power Forward. Granger played 2,278 minutes last season, with 1,147 of them at the Power Forward position. This is essentially half of his time on the court, and maybe with some improvements in other areas, this same balance could be enough to push the Pacers towards a winning record.

The other point I would like to make is that this suggestion of playing Danny Granger at Power Forward is not necessarily a call for him to change his game. Half of his minutes last season came at this position and offensively he played those minutes very similar to the way he played at Small Forward. These positive numbers may be as much an indication of the strength of the Pacers playing a small lineup, anchored by Hibbert with the floor spread around him, as it is of any particular skill or attribute of Danny Granger's.

Maybe a simpler way to think about my suggestion is that the Pacers were much better last season when they played a small lineup, and that they need to factor this into their lineup decisions next season. The Pacers played small often last year, but usually as a reaction to the team falling behind. Perhaps the Pacers should think about making the small lineup the status quo, and use a conventional or big lineup as a reaction to game situations?

I hope these numbers helped clarify my suggestions. I would love to hear anyone's further thoughts on the matter!