Can Roy Hibbert And Troy Murphy Be Successful Playing Together?

Share All sharing options for: Can Roy Hibbert And Troy Murphy Be Successful Playing Together?

Well the Draft is behind us, and despite a wealth of talented frontcourt players, the Pacers choose to pursue the best player available strategy; taking wings, Paul George and Lance Stephenson, with their first two picks. While there is still the possibility of a trade, it appears more and more likely that the Pacers will enter next season with same starting frontcourt as last year, Troy Murphy and Roy Hibbert.

Many analysts pointed out defensive problems when both players were on the floor last season, and the negative impact sharing floor time seemed to have on Hibbert's overall production. This led to the peanut gallery calls for the Pacers to pursue a long, athletic shot blocker in the draft to replace Murphy.


So is there truth to the idea that Murphy and Hibbert don't play well together, and are there numbers to back it up? Are there things the team can do to maximize the synergy of their skills?

To begin with, there is no denying that Murphy and Hibbert were a huge part of our team last season, and barring a summer trade, likely will be again next year. Together they played 22.2% of the total team's minutes last season. Of the 401 different 5-man lineups used by the Pacers last season, 273 of them featured one or both of them. The Pacers played 19,705 minutes last season, which means 7,882 minutes were played by the Power Forward and Center positions. Below is a table which shows the minute breakdown by percentage that were played by Hibbert and Murphy together, Hibbert at Center without Murphy, Murphy at Power Forward without Hibbert, and Murphy at Center without Hibbert. 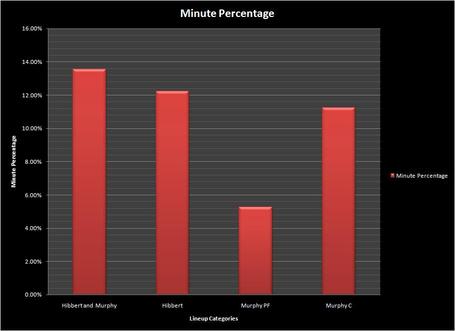 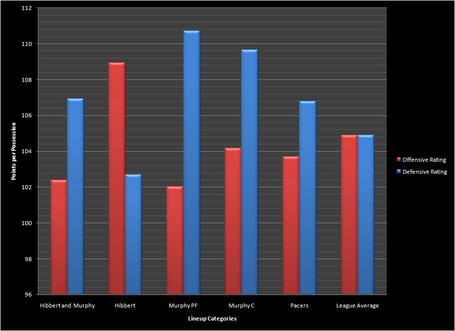 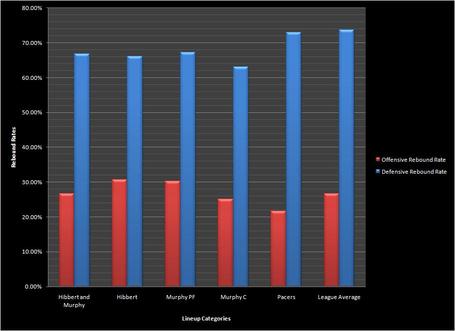 So what's the explanation for the team's struggles with both players on the floor? Neither is overly athletic, or an accomplished defender, but is it as simple as that? Both are willing passers, and have very different offensive skill sets. On paper they should work well together, so why are the Pacers a below average offensive team when both are on the floor. To try and answer these questions I turned to my brand new MySynergySports membership. If you are unfamiliar with Synergy Sports, they are a company which has developed an extremely detailed and comprehensive video and statistical scouting tool. MySynergy is the new version aimed at fans and amateur analysts. 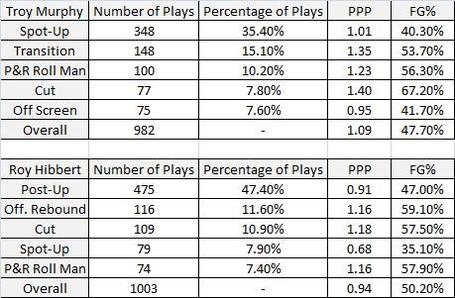 There are some surprising numbers here and looking closely some ideas begin to emerge about why the Pacers struggle offensively with both players on the floor. The powerful "offense on paper" of the Pacers has Hibbert operating in the post, and Murphy moving around the perimeter looking for his jumpshot. Murphy's two least efficient possession types here are Spot-Up jumpshots, and jumpshots coming off screens. In addition, Hibbert is not very effective on pure Post-Up possessions.

Both players were effective on shots coming off a Cut or from a Pick and Roll. Murphy's 3PT shooting is also an obvious weapon in transition. In a minute we'll come back and look at how these positive skills might be used to create some more effective lineups for the Pacers next season.

Here are the same numbers but from the defensive end of the floor. 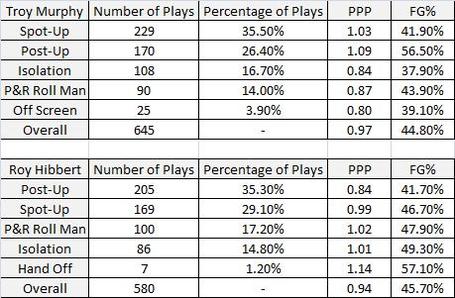 From looking at the numbers here we can see that Murphy really struggled against Post-Ups and Spot-Ups. Hibbert, unsurprisingly, struggled when asked to move out on the perimeter and guard against Isolation, Spot-Ups and the Pick and Roll. Another component, which isn't reflected in these tables, is the team's poor Defensive Rebounding numbers when these two are on the floor together. Despite reasonable defensive numbers, too often these possessions end with a missed shot and an offensive rebound for the opponent.

Now that we have identified some of the problem areas in a little bit more detail, let's talk about some of the possible solutions.

1) The first and a very likely scenario is that Murphy winds up being traded. This is not meant to assign blame to him for the struggles of Hibbert or the team when he is on the floor. He is simply a good player, with several distinct skills and a large expiring contract. The Pacers desperately need help at Point Guard and moving Murphy either this summer, or during the season seems like one of the most likely options to acquire an upgrade at that position.

For the sake of this analysis I am going to assume that the Pacers hang onto Murphy for the bulk of or even the entire season. What can they do in terms of playcalling and lineups to create a better situation for Murphy, Hibbert and the entire team to be successful?

2) It's clear that having them on the floor together, with Hibbert in the post, and Murphy floating around the perimeter is not the most efficient offense they can put together. Although a prodigious post scorer in college, Murphy rarely works in the post anymore, and scored only 0.69 Points per Possession on Post -Ups last season. If O'Brien wants to work the ball through the post and then out to the perimeter, I would like to offer a different suggestion: Let Danny Granger work on the low block.

Granger only used 62 possessions on Post-Ups last season. Watching video of each of these possessions it's clear that most of them are early transition Posts, or Granger taking advantage of a mismatch in size, being matched up with a smaller defender. 62 possessions works out to less than one a game, but Granger scored 1.21 Points per Possessions and shot 59.3% on Post-Up opportunities. Allowing him to work more out of the low-post, could move Hibbert to the high post. There he can handle the ball, making entry passes to Granger or finding cutters. Granger on the low-block can also look for Hibbert and Murphy cutting to the basket, scenarios where they were highly effective last season.

I am not saying Granger in the post should be the focal point of our offense. But maybe we can double his 62 possessions there up to 120. Assuming he plays the entire season, this is about a possession and a half per game. Allowing him to work more on the block could decrease the 255 possessions he used working out of Isolations, where he only averaged 0.84 Points per Possession. It could also potentially move some of Hibbert's Post-Up and Murphy's Spot Up possessions, to shots off of Cuts. A category they were very efficient with.

3) My next solution is a little bit more radical. The Pacers had 43 different 5-man units which played at least 20 minutes together last season. Below is a table showing some stats for the Top 10 in terms of Overall Rating (Offensive Rating - Defensive Rating).

5 of the 10 units, and 4 of the 5 best defensive units feature Danny Granger at Power Forward. Here is my radical solution: Make Granger the starting Power Forward. This allows the team to keep Brandon Rush on the floor at Shooting Guard. A clear bonus, as he is featured in 6 of the 10 lineups, 4 at Shooting Guard and 2 at Small Forward. A hole then opens at Small Forward for the Pacers' 1st Round Draft Pick, Paul George. Troy Murphy moves to the bench and becomes the back-up center. There will be plenty of minutes available there as Hibbert rarely tops 30 minutes per game. In addition having Murphy come off the bench would give some offensive punch to the second unit and create a lot of versatility in different combinations with Foster, McRoberts and Hansbrough. 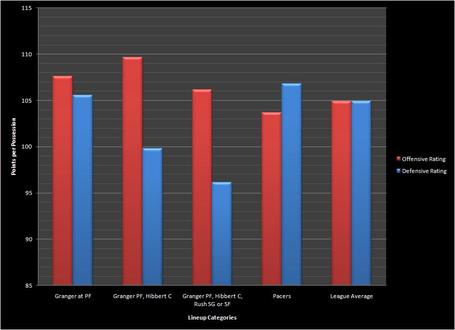 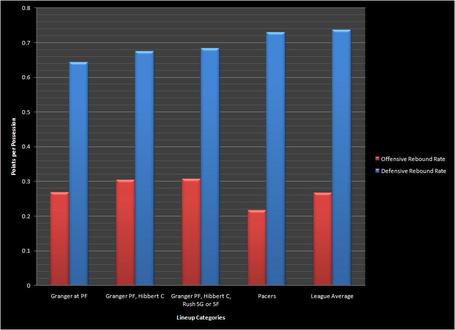 In any of these 3 categories the Pacers were an above average team at both ends of the floor. Granger and Hibbert in the front court without Rush made for an extremely potent offensive team, with and Offensive Rating of 109.7. Adding Rush lowers their offensive efficiency (still above average) but made them a remarkably effective defensive team. The 96.15 Defensive Rating the team put up in that scenario, was significantly lower than the league best mark of 102.8 posted by the Charlotte Bobcats. It's unreasonable to expect a number that low to hold for the whole team across the whole season, but the fact remains that it was a powerful defensive lineup.

All 3 of these categories also saw the Pacers grab Offensive Rebounds at a rate above the league average. The numbers do indicate that the Pacers may continue to struggle on the defensive glass with these lineups, but the solution may be coming in the person of Paul George. Moving Danny Granger to Power Forward would allow George, a strong defensive rebounder, to start at the small forward position. George does not have a reputation as a physical player, but he did post a solid 19.0% Defensive Rebound Rate in college last season. While this number will certainly decrease as he transitions to the NBA, it bodes well for his future abilities. 19 Small Forwards (Gomes, Gallinari, Mbah a Moute, Ariza, M. Williams, Turkoglu, C. Butler, Marion, Maggette, Deng, Hill, Jerebko, Casspi, Harrington, Durant, Barnes, L. James, G. Wallace) posted a DRR of 14.0% or better last season. 14.0% seems like a number well with the reach of Paul George, and so it's reasonable to expect he could make a significant impact on the defensive glass as a starter paired with Rush, Granger and Hibbert.

Clearly the Pacers had some problems last season when Hibbert and Murphy were paired together. Their defensive limitations and clashing offensive skills hurt the team. The Pacers could move Murphy, making this entire post moot, but he is an extremely talented big man with a unique skill set. I know we need help at Point Guard, and moving Murphy might be the only way to accomplish this, but I would only advocate moving Murphy for guaranteed help at that position. Murphy's individual numbers are strong, and he is a player coveted by many of the top teams. Moving Murphy could aid in the acquisition of additional assets, but if their are other solutions, why not hang onto as much talent as possible?

There appear to be solutions to the Murphy-Hibbert situation. Adjustments could be made to offensive sets and lineups, which could eliminate some of the problems and maximize each of their contributions. The Pacers are looking to acquire talent, and Murphy is undoubtedly one of the most talented players on our roster. Wouldn't it behoove the team to look deeper at some solutions to create success with the current roster, rather than moving talent for the possibility of talent?