How Does Danny Granger Find His Shooting Rhythm?

Share All sharing options for: How Does Danny Granger Find His Shooting Rhythm?

I know that the season is over and most Pacer fans have turned their attention wholeheartedly to trade rumors and impending roster changes from Free Agency and the NBA Draft. I am excited as anyone about looking forward to next season, but I still have some angles to pursue in reviewing last season.

One of these angles came from a post I recently wrote for my own blog, Hickory High. The post was inspired by a Disciples of Clyde podcast where Dan Filowitz and Bethlehem Shoals were discussing the occasional and infuriating habit of some players to begin a game looking for a shooting rhythm by forcing long jumpers. Their discussion, and my post in response, focused mostly on Kobe Bryant and LeBron James.

In an effort to create a larger sample for that analysis I included, in addition to Kobe and LeBron, the Top 20 players from last season in terms of Field Goal Attempts per Game. This led me to Danny Granger. Danny's shot selection has been a point of repeated frustration, one which I have previously examined. I don't mean to repeatedly harp on him, but being the face of the franchise brings great responsibility and great room for critique.

The data I collected for my Hickory High post gave me the impetus to discuss his shot selection even further. Here we will be specifically looking at the shots Danny takes at the beginning of a game and comparing it to his shot patterns as a whole. Analysis after the jump . . .

As I mentioned above, I began by putting together a list of the Top 20 players from last season in terms of Field Goal Attempts per game. I then used Hoopdata‘s player pages to calculate what percentage of their Overall Field Goal Attempts came from each area of the floor. For their game-starting shot patterns I went through and looked at the 1st 4 Field Goal Attempts of each game for each player during the 2009-2010, what location those shots came from, and turned that into a percentage.

First off, I'm excited to have an opportunity to offer Danny Granger some praise for his shot selection. It's clear that to start games this season he made a concerted effort to shoot less from the 16-23ft. range (the most inefficient shot in basketball) and get shots from the mid-range and in. It would be nice to see his At Rim% go up, but shooting an additional 6% or so of his shots from 15ft. and in, is a good sign.

Now for the bad news. The percentage of his shots which were 3PT's was second highest of the players I looked at in both the Overall and 1st 4 Shot categories. Only Aaron Brooks had a higher percentage of his Field Goal Attempts as 3PTs. To put his percentages into an even larger context, no one else but Brooks and Granger had 28.00% or higher of their Field Goal Attempts as 3PTs in the Overall category, or 24.00% or higher in the 1st 4 Shots category. To be clear we are talking about a list that includes Monta Ellis, Joe Johnson, Kevin Durant, Brandon Roy, and Rudy Gay. Here is the entire data table: 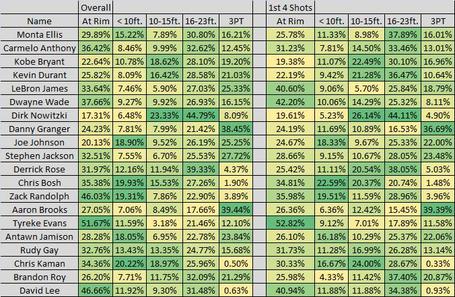 Now some will argue that Danny is among the best 3PT shooters on this list, and its good for the team to have such a large percentage of his shots coming from behind the three point line. My concern is that his 3PT% declined from 40.5% to 36.1% this season, a decline which I think is largely attributable to shot selection. His 3PTA per game increased from 6.7 to 7.1, which works out to about one extra 3PTA every other game. The problem is that his FGA per game also declined which means an even greater percentage of his shots were 3PTs. The increase is significant as well, going from 35.19% last season to 38.45% this season.

Now Danny is missing a few things that some of the other players on this list have, namely other potent offensive weapons on the team. Danny has to carry a huge load for the Pacers, and is frequently called upon to create his own scoring opportunities. With his skill set this often means a pull-up 3PT. If the Pacers can add some shot-creators this season, and continue to develop the post games of Roy Hibbert and Tyler Hansbrough maybe Danny will be able to find more space on the court for slashing and cutting to the basket.

There are reasons for concern and reasons for hope looking towards next season. Danny's shot patterns seem to indicate an awareness of using close shots to set up his long range game. I am keeping my fingers crossed that the team can continue to add solid players around him, and facilitate an offense which plays to his strengths and discourages him from just bombing away without a conscience.

For further comparative fun, I also put each player's shot patterns for each category into some small line graphs. The blue line on each graph represents a player’s Overall Shot Percentage for each area. The red line represents the Shot Percentages on each player’s 1st 4 shots. Here's Danny's, and a few from players who I think of as having somewhat similar offensive skill sets (click for close-ups): 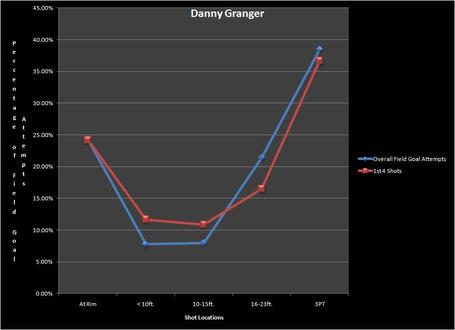 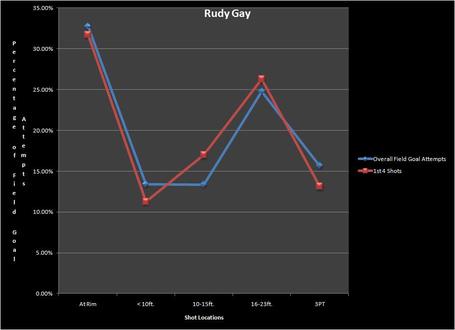 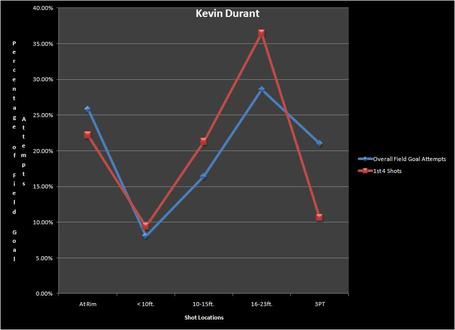 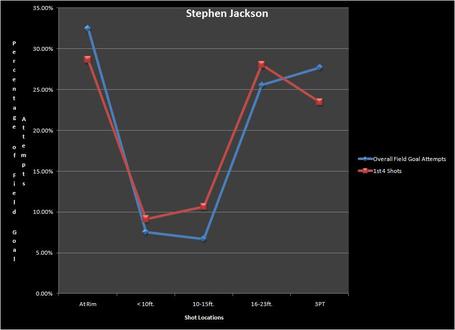 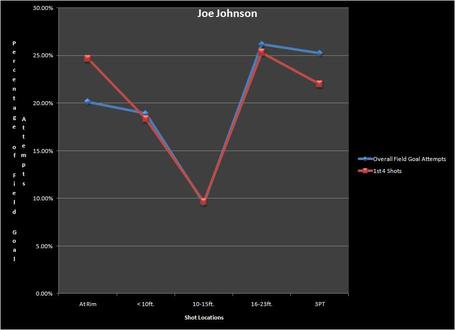