Share All sharing options for: Jim O'Brien: An attempt to measure coaching effectiveness.

One of the "Holy Grails" of basketball statistics is a metric which can isolate and measure the effectiveness of a coach. This is an extremely difficult proposition because of the incredible number of variables. Other than Wins and Losses, coaches don't directly produce any quantifiable statistics. Almost everything that can be measured is produced by players, and obviously a player's production can't be traced or attributed directly to coaching. Setting aside the lack of accurate metrics, statistician's even disagree on the basic premise that coaches have any effect on their team's production at all. For the curious, an interesting post by Ryan McCarthy at Slate explains this disagreement in more detail. Despite these challenges, the question of a coach's effectiveness is one that needs to be asked repeatedly. Although there may not be a satisfactory answer, there is data available which can give us some indirect evidence.

This brings us to the case of Jim O'Brien. O'Brien has just finished his 3rd year as head coach of the Pacers. Each season ended in disappointing fashion, with the Pacers finishing outside the playoffs. A lot of voices from the fan base called for his firing during the season. In spite of this and the team's record, he received a vote of confidence from Larry Bird last week, who affirmed that O'Brien would be the Pacer's Head Coach, at least until his contract expires at the end of next season.

Although he has brought a few positives, I have a fairly negative view of the job O'Brien has done with the Pacers. Except for a few hiccups this season, I think he has handled a difficult situation with poise and professionalism. He also is not working with the most competitive roster in terms of talent. That being said, he has not gotten the job done. We have missed the playoffs three years in a row, despite one of the most top-heavy eras the Eastern Conference has seen (It's not like we are missing the playoffs with 48 wins like in the Western Conference). The development of young player has been stagnant. The team simply hasn't improved during his tenure.

Of course these assertions are based mostly on my personal observations. For a true, honest and complete examination of the job Jim O'Brien has done, we will need to look at as much information as possible. There is quite a bit to look at, so jump at your own risk . . .

Not being able to rely on a specific metric, I had to put together several different statistics. Below is a Table of Contents of what I included..

The picture these stats seem to paint is of average results from slightly below average teams. I have to admit that I had mostly forgotten the moderate success O'Brien had in Boston and Philadelphia. It seems like those were teams that overachieved with average rosters, but that has not been the case in Indiana. The team has posted a negative Rating Differential all three seasons under O'Brien. The other memory jogger was that several of O'Brien's teams were very good defensively. Despite his current reputation as an offensive minded run and gun guy, he has never had a team finish in the Top 10 in Offensive Rating. He has however had 3 teams finish in the Top 10 in Defensive Rating.

2. Statistics for Plays Run out of Timeouts
The idea to include this data came from a Bulls By The Horns post. Chicago fans have been similarly frustrated with the perceived X's and O's deficiencies of Vinny Del Negro. This post mentioned the idea of examining all of the plays Del Negro and the Bulls had run out of timeouts. I decided to try the same thing for O'Brien and the Pacers.
I went through and coded the results of each play the Pacer's ran coming out of a timeout this season. I also included plays they ran at the beginning of a quarter. If a timeout was called on a foul but before a player shot their free throws, I would include the offensive play that came right after the free throws. Now not all of these instances were set plays that were directly called by O'Brien. My thinking is that this represents a large sample size, of situations were O'Brien's impact would be the largest on the offensive set. If he wasn't calling a specific play I would assume he would be giving some general offensive directions, "we need to attack the basket," "let's get back to the pick and roll," etc. This should represent the scenarios were his impact on the offensive decision making of the players on the floor would be the most direct. For the sake of comparison, I also tracked the same information for the Pacer's opponent in each game and included that data as well. 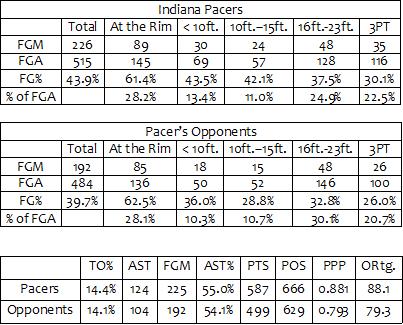 In early 2006, Bill Simmons wrote a column lamenting the coaching failures of Celtics Head Coach, Doc Rivers. In his column he proposed creating a "Bad Coaching Index." The statistics he proposed including were ones he felt were particular weaknesses of Rivers'. The folks over at 82games jumped right on it, did some serious number crunching, and put together a 2-part analysis. (Part 1, Part 2). Unfortunately, these numbers are all for the '05-'06 season, when O'Brien wasn't a head coach. However, I borrowed a few ideas from their analysis for the next two sections.

The first is to look at blown leads and comebacks. I only looked at the 4th quarters and overtimes of Pacers games. The data is separated by how large the lead or comeback was.

This is another statistic which comes from the Bill Simmons Bad Coaching Index. The Pacers used 400 different 5 man lineups this season (this number includes the variations in the positions the players played.) Obviously this number is heavily influenced by the rash of injuries the Pacers faced this season. Here is a look at the Pacers compared to the rest of the league.

As I said above these numbers are heavily influenced by injuries, as well as mid-season trades and free agent signings. When 82games.com put these numbers together for the 05-06 season they did see some connections

"So first of all it's only fair to point out some obvious things: teams that make trades or have serious injury issues are much more likely to use lots of different 5-man units. Likewise, teams with lots of depth or bad teams trying to figure out a winning lineup with what they've got on the roster will experiment more often. Still when you check the units used against winning percentage, you'll find a -.39 correlation, which is a reasonably strong way of saying that more successful teams tend to use fewer different units. "

For me, this has been the most frustrating aspect of O'Brien's coaching tenure. At least 75% of being a fan is the hopes you carry for your team, be they rational or irrational. Almost all of those hopes are pinned to the hypothetical development of specific players. Can player X take the next step and become a team leader? Can player Y develop into a reliable 3 point shooter? Can player JS stop taking 3 pointers altogether? With a few very small exceptions, these player development hopes for the Pacers haven't materialized under Jim O'Brien. I understand that the responsibility for skill development is shared with the rest of the coaching staff and the players themselves. Still, O'Brien is ultimately responsible for making sure his players improve and for putting them into situations which maximize their skills. Below is a table of some players who have joined the Pacers under O'Brien's tenure. I included their Pacers stats and their stats for the last season with their previous team. 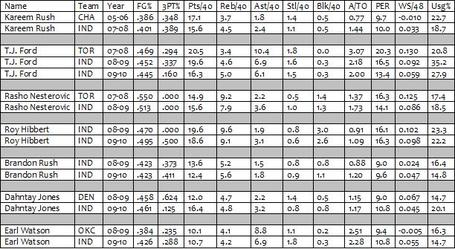 When I started collecting stats for this post I expected all the numbers to reinforce my own conception: That Jim O'Brien was a terrible coach and should be fired before next season. The truth is apparently more complicated. In his three years in Indiana he has been working with below average teams in terms of talent. Despite that he has gotten the Pacers to play hard and on occasion play really well. They have started each season badly, but never quit on him and finished each season strongly. O'Brien has also had a hand in changing the perceived culture of the organization from one of gun toting-thugs to hard working over-achievers. Except for a few poorly chosen comments to the media this year, he has been professional and positive about his team and their situation. I also understand, with the teams current financial challenges, how unpalatable it would be to let him go now and pay the salaries of two head coaches next season.

Despite the positives, I think he has not done everything the job required of him. Their has not been sufficient development of young players. There is still too much disorganization and chaos on the floor, especially on the offensive end. Too often tactical advantages and opportunities are passed or ignored. In my heart I don't think he is a coach who is can lead the Pacers to a championship and I don't want to waste even one more year floundering for the sake of finances or stability.

I think we expect O'Brien to be fired because in the current NBA climate, it is so rare for a coach to be given extended opportunities to build success. You win or you're gone and that hasn't been the case with O'Brien. I have accepted the fact that he will have one more opportunity to lead this team. Whether he is merely a keeping a seat warm for our next coach, or about to find his stride, I wish and hope for him to be successful this summer and next season. I honestly expect more of the same next year, but hold out hope that things can and will be different. For better or worse he will lead the Pacers into the upcoming season, and for the sake of the team and fans alike I wish him the best.