Share All sharing options for: 10/4/10 - Pacers' Stat of the Week: Rebound Percentage

Welcome to the first installment of a new, weekly feature here at Indycornrows, Stat of the Week. The plan is to post each Monday morning (or afternoon in this case), and focus in on one statistic or number to recap and tell the story of the Pacers' performance for the previous week. As this is the first installment, there is nothing to recap, but we'll look forward to the Pacers' first week of preseason games.This undertaking is absolutely an experiment and is subject to changes in format, style and content.

For our first installment we will be focusing on Rebound Percentage. This statistic, also referred to as Rebound Rate, is an estimate of what percentage of available rebounds were grabbed by a team or specific player. When looking at a team's numbers this statistic is a more effective measure of rebounding ability because it eliminates variations due to the pace and style of a team’s or opponent’s offense.

For example, teams like the Golden State Warriors tend to play at a fast pace and take a ton of shots. Therefore, there are more missed shots available to rebound. Looking at the percentage of rebounds gotten gives more accurate information about a team's ability and effectiveness than the simple number of rebounds gotten.

Rebound Percentage, and it's component statistics Offensive Rebound% and Defensive Rebound% can be found at several terrific stats websites, including Hoopdata, Basketball-Reference, 82gamesand Basketball Value. All the numbers I used for this post came from Hoopdata.

I am a little late to the dance on this subject, as ESPN's John Hollinger spent a significant portion of his Pacers' Season Preview focusing on their potential rebounding problems. He went so far as to say they had the potential to be a historically bad rebounding team this season. I agree wholeheartedly with Hollinger, and no aspect of the current Pacers' roster scares me more than their inability to rebound effectively. Below is a table showing the Offensive and Defensive Rebound% by team from last season.

Even scarier than the Pacers' subpar rebounding performance last season, is the fact that they will be without Troy Murphy this season, their top rebounder from the past two seasons and one of the ten best defensive rebounders in the league over that stretch. While the new roster additions aren't horrible rebounders, there is no indication that any of them possesses the special ability that Troy Murphy demonstrated in this area. Below is a table showing the individual Offensive and Defensive Rebound% of each the current Pacers. (The collegiate numbers for Stephenson, Rolle and George come from Ken Pomeroy's excellent college statistics website.) 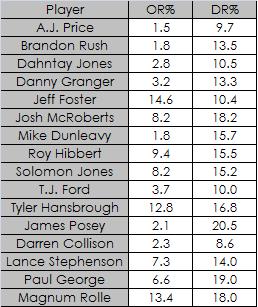 It's undoubtedly troubling that James Posey has the highest Defensive Rebound% of returning players at only 20.5%. In addition Posey will be splitting minutes with several other wing players and may not be on the floor enough to have a huge impact on the team's overall rebounding. I also hate to point out the fact that a player who player primarily small forward last season was a more effective defensive rebounder than any of the centers or power forwards on our roster.

Josh McRoberts, who appears to have the inside track on the starting power forward slot, has shown the ability to be a capable rebounder. On another roster this might be enough to get by, but with a team starved for rebounds capable just won't cut it. He has a good combination of height and athleticism. Hopefully, this will be combined with some increased aggressiveness and a recommitment to the physical fundamentals, using his body and boxing out everytime a shot goes up.

The rebounding percentages of Stephenson, Rolle and George all look fairly respectable for their positions. Keep in mind that these percentages were posted against players of a lower level of athleticism and skill than they'll be facing in the NBA. In addition George's numbers were helped by a mix of minutes at both forwards spots. If everything goes according to plan he will be a 2/3 this season, as opposed to a 3/4 and will spend less time around the basket on defense than he did in college. Rolle can definitely help in the frontcourt but will have to prove he can handle his other offensive and defensive responsibilities before he sees enough minutes to make a real difference.

A lot of recent discussion about Danny Granger has centered on the learning experience he had with USA Basketball this summer, and about a recommitment and restyling of his leadership with the team. If this is a true and honest goal, working the glass would be a great place to start. Granger's rebounding percentages were fairly pitiful last season, especially for a guy who spent almost half of his minutes playing power forward. The most frustrating thing is that he has the potential to be a much stronger rebounder. Below are his career percentages.

In his rookie season, asked mostly to focus on defense and rebounding, Granger posted some excellent numbers. The growth in his scoring acumen over the past 5 seasons has been coupled with a steady decline in his rebounding production. I understand that he plays more on the perimeter, even as a power forward. This decline has as much to do with his role change on the team as it does with any lack of effort. That being said, Granger is one player on this team who has demonstrated that he can be a much more effective rebounder than he has shown in recent years. Hopefully, the addition of Collison and the growth of Hibbert will allow him to relinquish some of his offensive responsibilities and round out his game a little more.

I don't have any numbers for comparison, but this does seem extremely high. This information can be taken in two ways. His shot selection was terrible and he was missing a ton of shots at the basket. He was tenacious enough to pursue the ball on his own misses and did a great job recovering the rebound. The true value is somewhere between those two statements, but as his FG% will hopefully rise this season, his Offensive Rebound% will likely decrease.

One player on this list with a lot of room for improvement is Roy Hibbert. A common refrain is that Hibbert's rebounding numbers suffered mightily from spending most of his minutes alongside Troy Murphy. With Murphy gone there should be more rebounds available for Hibbert at the defensive end. I find this to be extremely specious logic, and I don't think the numbers bear this out. Below are Hibbert's Offensive and Defensive Rebound% from each of his 4 years at Georgetown.

Hibbert had one exceptionally strong rebounding year as a sophomore. His numbers declined each of his last two seasons in college leaving one with the impression that his ceiling is as an average rebounder at best. It can be infuriating as a fan to watch a reasonably mobile 7'2" center fail to secure so many rebounds. Tom Haberstroh did an interesting analysis at Hardwood Paroxysm this spring looking at the connection between height and rebounding. A few of his conclusions seem particularly relevant to our discussion here:

Offensive rebounding and effective height have a much stronger relationship than overall rebounding– the correlation in this (small) sample was .42.  A one inch increase in effective height translates to about a two percent uptick in offensive rebound percentage (say 24 percent to 26 percent).  Perhaps with more defenders in the lane to rebound the ball, height gives you that extra edge needed to steal a board.

Of course, as the Pacers can attest, sometimes height matters nothing.  I mean, 7-2 Roy Hibbert grabs fewer offensive boards than Chuck Hayeswho is eight inches shorter.  To reiterate, a big vertical can close the gap underneath and Hibbert’s ineptitude demonstrates this quite nicely. . .

. . .Here’s where it gets interesting. On the defensive end, it doesn’t seem to make a difference whether you’re a tall team or not.  The relationship is essentially random with a correlation of -0.03.

Haberstroh's numbers seem to be saying that offensive rebounding is a more arbitrary proposition which favors someone with a physical advantage, such as height, vertical leaping ability, speed, or pure tenacity. Defensive rebounding is something that is done well through fundamentals and scheming, largely negating purely physical advantages. For Hibbert to take the next step and improve as a defensive rebounder, being in the proper defensive position and putting his body on opposing players is going to make a bigger difference than the departure of Troy Murphy.

Regardless of what adjustments are made during training camp, rebounding appears to be a place the team will struggle. No one on the present roster has demonstrated anything more than average ability in this area, and collectively they will likely be outrebounded by most teams. The Pacers' like to run, but every offensive player leaking out early is one less defensive player hitting the boards.

If the Pacers' hope to overcome their shortcomings on the glass they will most likely need to address it through an attention to detail, a systemic aggressiveness and possibly an adjustment in offensive and defensive schemes. Rebound percentage will be a great indicator, throughout the season, of the commitment and intensity of the players as well as the ability of the coaching staff to tweak their plans to their personnel.

The Pacers' have three preseason games this week against Memphis, Orlando and Houston, who were all solid rebounding teams last season. Hoopdata provides boxscores for preseason games, so check out the numbers and see how the Pacers' did rebounding the ball. Chances are if the percentages are high the team pulled out a win or two.