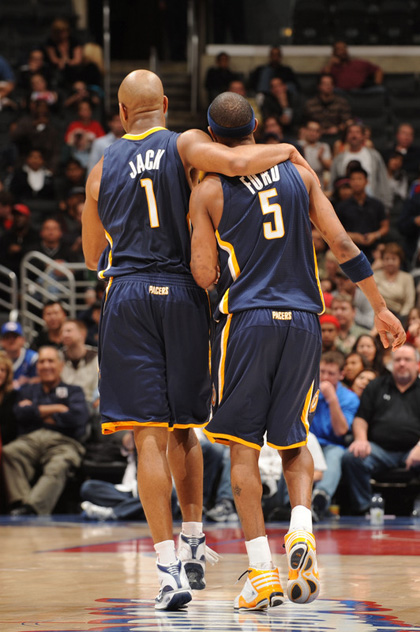 I've become a huge fan of Jarrett Jack this year. As a first year Pacer, he has exceeded expectations both on and off the court. Admittedly, I'm a bit biased thanks to my own interactions with Jack off the court. The couple of times I spoke with Jack he gave me all the time I wanted, answered my questions thoughtfully and thoroughly, looking me in the eye as if he was there to help me out instead of simply fulfilling a post-game obligation.

I've also observed his interactions with teammates. Jack leads the team in on-court moments where he puts his arm around a teammate, celebrating the good or keeping focused through the bad. When the showers only shoot cold water after a tough loss, a request is made to visit Jack's nearby flat. No problem.

When you combine the way he's showed up every day this season and stepped up his game on the court with his good-natured personality in the locker room, there's no doubt he'd be voted Mayor of the Fieldhouse if such an election were held.

Of course, that makes Jack seem like a politician, saying what others want to hear to avoid any negative light. Nope, that's not Jack. The guy is a straight up fact checker for what is going on. If the Pacers played well, he'll tell you why and praise the teammates who made it happen. If the team is struggling, he'll tell you why, take his share of the blame and offer a plan to improve. If they were lucky, he'll admit it without overlooking the problems. If the team was unlucky, he'll remind you of the good while oozing pain from the loss.

Then there is the on-court value Jack brings to the Pacers. First and foremost, he plays. Literally.

Jack has played in every game so far this season, averaging 32 minutes. In 12 of the last 13 games, Jack has played more than 37 minutes. In 6 of those 12, he surpassed 40 minutes. For the season, Jack is averaging 12.3 points per game, but over the past ten games minus Danny Granger, Jack has put up 21.5 points per game. He's also taken his fair share of big shots down the stretch, including the go-ahead points on Saturday night to help push the Pacers past the Clippers.

Jack's numbers have risen thanks to the extra minutes played mostly on the wing. Jack's PG game remains a work in progress which means his handle in traffic and decision making with the ball remain erratic at times.  All of his negatives have improved from the start of the year though, and considering Jack's just 25, his development is still on the rise.

In fact, seeing the progress he's made over the past few months offers hope that bigger and better things are ahead for Jack's career.

But at what cost?

That's the kicker which will make for a tough business decision for Larry Bird this offseason. As I heard Kevin Lee point out last week, Jack has probably made himself some money with his play of late considering he's a free agent this summer. If so, that money will probably be paid by another team.

As much as I love Jack, the Pacers don't have the cap room to offer a multi-year contract for $6-7 million. Plus, after years of cap inflexibility I'm not a big fan of locking up that much money for four or five more years. If the Pacers do sign Jack, regardless of the number, I'll be happy. But if they can get it done for a number under $4 million per year, I'll be real excited.

Ironically, the poor economic state of many NBA teams may help the Pacers in their quest to re-sign Jack. As the trade deadline proved, teams aren't ready to jump up and throw money around. Jack is a great team guy and utility player, but his game is far from perfect so how much a player like Jack can command will indicate just how bearish the NBA market this summer.

So we sit here wondering just how much Jack is worth on the open market and how much the Pacers are able to offer him to stay. This front office decision should be one of several interesting subplots to unfold this summer.

So how much do you think the Pacers spend to keep Jack?