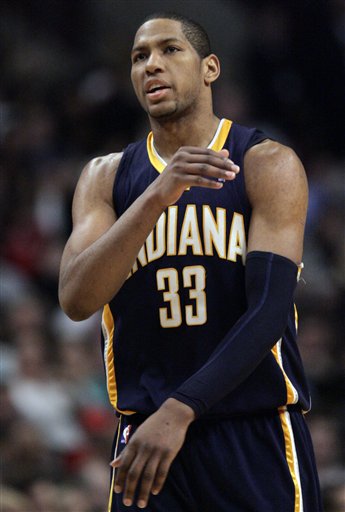 Tyrus Thomas swatted away Danny Granger's layup attempt with 27 seconds to go and with it the Indiana Pacers last gasp effort to both win the game and remain in the playoff discussion, as the Chicago Bulls closed out the Pacers to earn a 112-106 win.

It was a fitting end to the game and, for all intents and purposes, the end of the regular season "playoff" games for the Pacers. Even if Granger had scored the layup, the Pacers would've still been down three, in need of some help from the Bulls in the form of missed free throws. Assuming the host were missing those free throws, the Pacers still would've had to convert buckets at the offensive end. With the way this season has gone, those are some bold assumptions few would expect to happen. But instead of finding out, Thomas swatted the Pacers out of their misery when his block sealed the game.

Just as the game was a long shot to win late, so were the Pacers' hopes of making the playoffs heading into Chicago. They were 4.5 games behind Detroit and Chicago with two games against the Bulls and a game against Detroit remaining. Assuming they could beat the Bulls twice (like Granger's layup), thew would still need some help from a few teams in the form of losses. Assuming those teams coughed up the necessary losses, the Pacers still would have to win seven of their final nine games. With the way this season has gone, those are some bold assumptions few would expect to happen. Again, instead of finding out, Thomas swatted the Pacers out of their misery when his block sealed the win for the Bulls and pushed them 5.5 games ahead of the Pacers.

Despite the painful loss, the was plenty of good play from the Pacers against a Bulls team that has found their stride of late, reaping the benefits of adding John Salmons and Brad Miller into the mix. At this point, good play and great effort by the Pacers in a tough loss is fine by me since there's no way to avoid looking ahead to the draft.

More thoughts on the game: