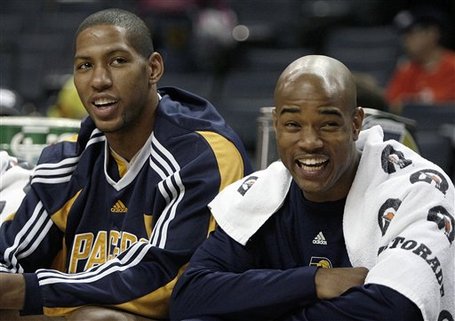 The Indiana Pacers turned in one of their better performances of the year to stop their losing streak dead in its tracks with an impressive 108-83 win over the Charlotte Bobcats.

If there's one lesson to be learned from this game, it's that if you are 28-42 a little upheaval is a good thing.  Jim O'Brien took advantage of the five-game losing streak and the public display of dissatisfaction between his staring backcourt to shake things up.

In doing so, JOB started Jarrett Jack at point guard knowing full well Jack would never be more focused entering a game than tonight. He also slipped Brandon Rush into the starting lineup to allow him to build on the solid game he had in defeat on Friday night.

Both moves paid off for JOB as Jack was on point all night, finishing the first half with 23 points and the game with 31 on 13-14 shooting. Rush chipped in 15 points on 7-14 shooting which didn't include a 3-ball. Rush scoring 15 points INSIDE the arc is a nice development for the Rook.

Even with Jack's 23 first half points the Pacers were only up seven at the half. But tonight the third quarter would be theirs. All theirs. Normally the third is unkind to the Pacers but, again we're talking upheaval here, so the 17-2 run to start the second half led to the Pacers outscoring the Bobcats 33-9 in the third. Game over.

The other key for the Pacers tonight was that JOB kept T.J. Ford on board despite not starting him at PG. How Ford reacts through this tumult will be interesting to follow but for one night at least, give him credit for coming off the bench and keeping things moving in a positive direction. Ford only took three shots but he had five assists in a little over 15 minutes off the bench.

In the end thought, this was simply Jack's night to let his wings spread and I have to say I'm quite excited for him as a player who is fully invested in the program so to speak. He will not give in until the season is over and tonight he set the tone for his teammates that they shouldn't either. Love it.