Share All sharing options for: Raptors 110, Pacers 87: Pacers Run Out Of Steam 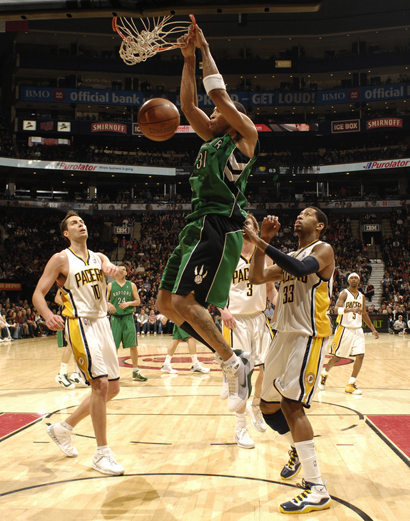 After dropping a 110-87 loss to the Toronto Raptors on Sunday afternoon, the Indiana Pacers are left with playoff hopes base solely on math. Until they are mathematically eliminated there will always be that hope.

Unfortunately, the Pacers play on Sunday was utterly hopeless.

This was a 30-point loss regardless of the late buckets and official 23-point deficit. As they did in Atlanta on Friday, the Pacers didn't show up to compete in the second half. Two games in a row with nothing for their opponent in the second half?

Suddenly the Pacers feel like they are heading for a free fall to finish the season. After putting forth a huge effort and outworking better teams much of the year just to give themselves a chance to win, maybe they've finally worn down mentally. Every team is worn down physically at this time of the year, but with their slight margin for error, the Pacers can't win through any mental fatigue.

An indicator of this type of change has been Jarret Jack's struggles in the past couple of games after playing some of the best basketball of his career. During that stretch over the past couple of months, Jack played as tough and as hard as he knows how; never shying away from a play and pulling the trigger on open shots without hesitation.

Now Jack admits that he's thinking a bit too much and lost that confidence that allowed him to let it rip and just play without, well, thinking.  While playing so great over the past two months, Jack was also playing a ton of minutes. Fatigue does funny things to the mind and the games it plays with the body.

Jack was speaking for himself but in a general sense, he very well could've included the whole team as part of his lament. They haven't been able to put together a decent win streak all season and now when they desperately need a string of wins, instead they begin a losing streak which includes two of the worst losses so far this season. While inconsistent play has hurt the Pacers all year, effort has rarely been an issue as it has in the past two games. If the inconsistent effort continues for the remainder of the year, this season will end in a quiet, disappointing fashion for the Pacers.

The NBA season is a marathon and the Pacers appear to have hit a 22-mile wall. That's usually when the mind and body barter over how to handle the remaining 4.2 miles of the race. Glory and accolades are the first thing off the bargaining table. What's left is a deal to simply finish.

Here are a few thoughts from the actual game: