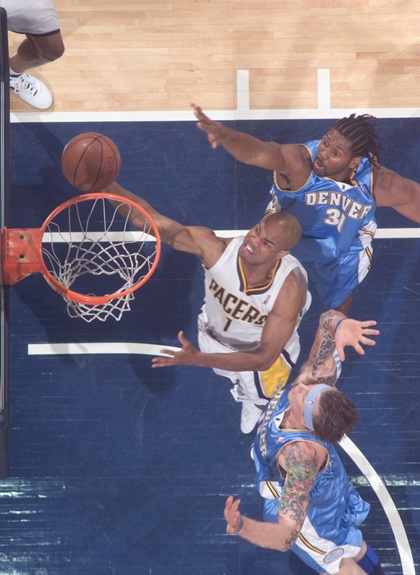 The Indiana Pacers played down the stretch like they were comfortable in a tight game at home. I didn't say they played perfect down the stretch, but the did keep the home crowd cheering through the final buzzer at which point the Pacers secured their sixth straight home win, 100-94 over the Denver Nuggets.

This was a game of good and bad segments with a fast pace at times, good half-court offense at other times and lots of missed shots sprinkled in all night.

The way the game started, it appeared this might be a classic race to 120 points. Both teams combined to make the first seven field goal attempts before two minutes had ticked off the clock.

From there it was a game of mini runs with some real live defense which nullified pace as a determining factor. Loose balls, offensive rebounds and big shots would determine the winner and both teams swapped the momentum throughout all 48 minutes. In fact, I'm sure if the game had five more minutes, the Nuggets would've surged back in the lead, again.

But there wasn't, so they didn't and the Pacers took care of the final surge for the win. Over the final two minutes of the third quarter, the Nuggets went off like flash lightening to turn a tied game into a nine-point lead before ending the quarter up seven.

I'm sure the Nuggets figured they had the Pacers sized up for a knock out, but these Pacers don't like the taste of canvas, so they always get up and come back fighting. Tonight was no different as the Pacers scrapped their way back into the game and eventually the win.

The signature possession of the night for the Pacers came when Troy Murphy rebounded a Carmelo Anthony miss with 3:50 left in the game.

The Pacers were up six and actually used some clock before Jeff Foster missed a long jumper which Marquis Daniels rebounded. With the fresh clock, ran it down again before Jarrett Jack was forced to shoot a long 3-ball which clanked hard. But there was Foster. After untangling himself from Nene, Foster chased down the loose rebound before it went out of bounds and saved it to Troy Murphy.  The Pacers took the shot clock down inside five seconds again, before, Quisy finally cashed in the third-chance bucket with a baseline jumper.

Much like the game, the Pacers' execution wasn't pretty, but the effort and nose for the ball, allowed them to eventually get it right, burn 1:15 off the game clock and push the lead to eight.

Ton of random thoughts from this won, so on to the bullets: